A new way to farm 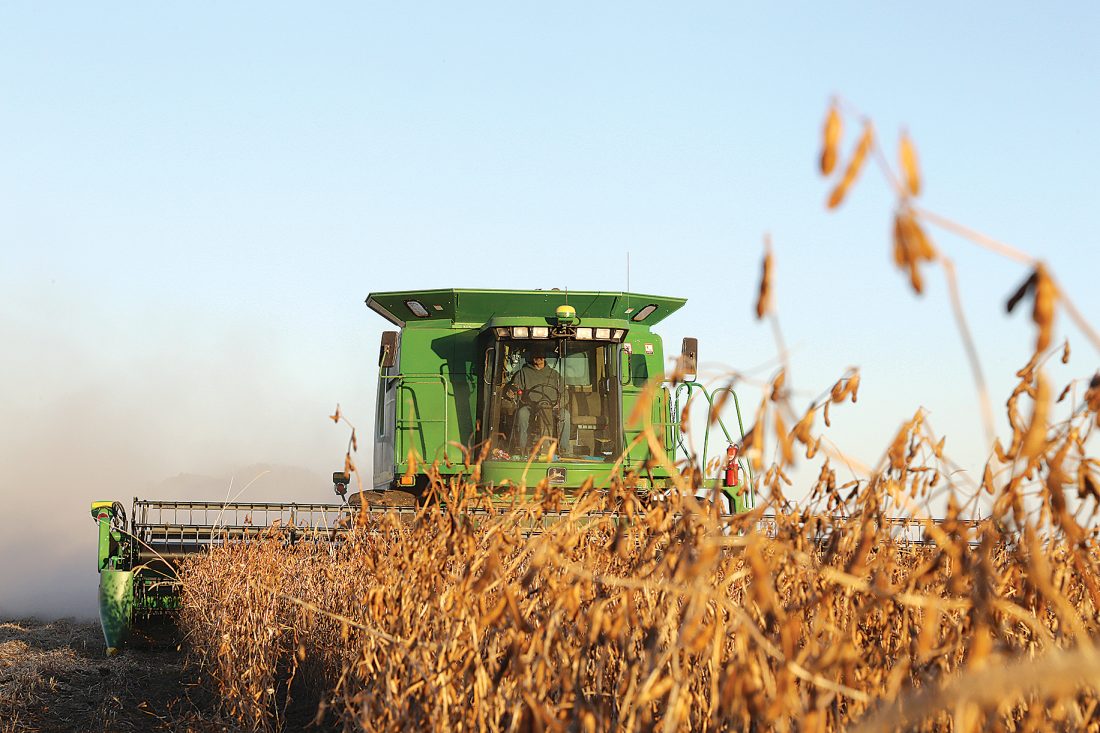 In the 1990s Jonathan and Carolyn Olson saw potential in new, organic-based concepts for crop farming.

Almost a generation later, they have a track record of finding and sustaining profitable markets. They’ve been built through extensive long-range planning, a process that requires attention to hundreds of farm management details.

In a presentation last week at the Adult Community Center in Marshall, Carolyn outlined many of the steps needed to successfully manage an organic farm. It included an overview of one of their most successful ventures, in which they serve as a specialized grower for the Phillips vodka distillery in Princeton.

Organic agriculture is not the same as farming the old-fashioned way,” Carolyn said. “It’s a very detailed process. Success depends on having the best possible production techniques and building successful networks.”

Their farm south of Cottonwood, which is registered as Fairview Farm, dates back to 1913. Jonathan’s grandfather, Nuel Olson, took an interest in crop variety development by becoming a seed grower in the 1930s.

For natural weed control, they’ve developed some of their own equipment for rotary disking and flame weeding. More often than not, their early efforts with a new concept have acted as stepping stones toward proven results.

One of their creations, a disk known as a finger weeder, is useful in conjunction with a deeper hoe such as a long tooth harrow cultivator.

The long tooth blade digs out weeds between standard corn and soybean rows. Meanwhile the finger weeder probes soil at a much shallower depth, which removes emerging weeds without damaging the root systems of crop plants.

“It stays a half inch away from the plant base,” Carolyn said. “That’s enough to take out tiny weed seeds. It also dislodges small weeds enough to prevent them from competing with crops.”

Flame weeding, the killing of weeds with intense heat produced by a fuel-burning device, either hand-held or tractor-mounted, within plant rows has involved similar field-based trial runs. The flame technology works best with corn plants, which have a stronger base and a higher growth point than soybeans.

Carolyn said the first tests of flame weeding were done on a limited number of acres, and that there was no expectation as to the level of success or failure.

“People who didn’t know we flame weeded thought maybe the corn was somehow damaged,” she said. “It looked that way but it wasn’t. The weed control benefits were helpful in the end.”

The same type of systematic approach is needed for organic soil fertility. The Olsons have finished hogs for nearby farmer Greg Boerboom since 1992. The hogs are not organically raised, but the manure from hog production is a nutrient that meets organic certification standards.

An additional source of soil management involves poultry manure, which is obtained from a major poultry operation near Cokato in central Minnesota.

To get the most value out of their fertilizer supply, Olson Organics uses precision soil management. Computer-based technology leads to precise readings of nutrient levels in specific portions of fields, and charts the findings with easy-to-read grid mapping.

With help from variable rate manure application technology, the best possible levels of nutrients are added to each field section. After a certain optimum point, extra amounts of fertilizer represent an added cost of time and materials with little if any boost to crop yields, which makes the precision method a profitable management tool.

Another factor in soil health is the use of cover crops such as tillage radishes and oats. They have a helpful interaction with the main crops, particularly by adding organic matter to the soil.

“Soil has all kinds of good bacteria that make it healthier and better for crop production,” Carolyn said. “Roots from the right types of cover crops are valuable as a source of soil nutrients.”

“Some of our best production happens when a field comes out of the alfalfa part of its rotation,” she said. “Alfalfa has very good long-term benefits when its part of a multi-crop plan. It allows nutrients to build up in the soil.”

Fairview Farm has a 20-year history of certified organic production. A three-year transition period is required for a new operation to become certified.

One of the most successful examples for the Olsons took shape in 2008, when they became a specialty grower for Phillips Distillery. Some of their corn is sold to the Chippewa Valley Ethanol Company of Benson, and then is sent to the distillery in Princeton.

The organic requirements are one of a set of manufacturing standards aimed at producing a popular, regionally-based brand of vodka. Panels of taste testers screen product samples to help in evaluating the distillation strategies.

“One of the rewards of organic production is the connection we have to processors,” Carolyn said. “We’re proud to know where our crops are going. It’s also satisfying to have the farm as a family activity and to be able to have two employees.”

Olson serves on the boards of the Minnesota Farm Bureau Federation and the Agricultural Utilization Research Institute, and enjoys making occasional public presentations about farm topics.

“It’s important for older adults to have opportunities to hear about farm topics like organic production,” Radke said. “For some of them, current information ties in with what they experienced growing up.”