Roger to the rescue 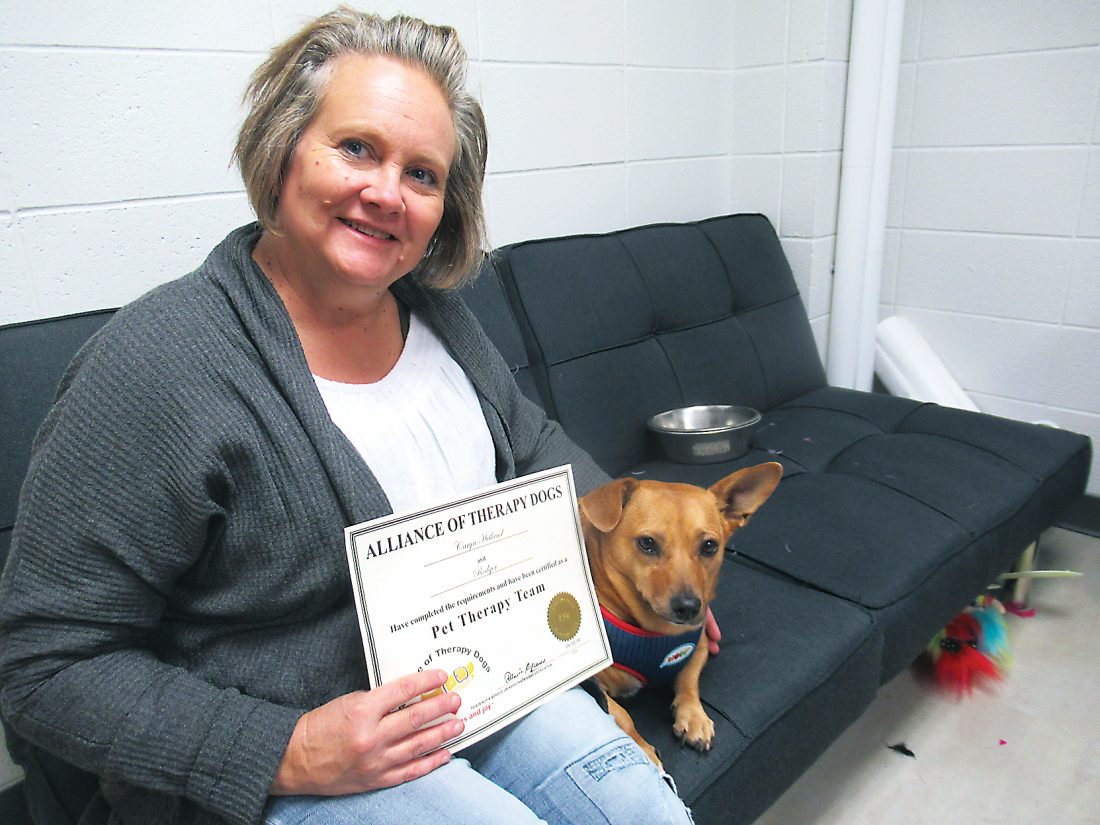 An extensive service dog training program is required for any dog that shows potential to serve in such a capacity. Roger, as an orphaned animal rescue pet, is rare among service dogs since many of them are purebreds and are trained starting when they’re being raised as puppies.

Two years ago Roger was a lost, confused stray dog on the streets in Worthington looking for food, shelter and companionship.

Through the efforts of the Tracy Area Animal Rescue’s volunteers, he was given a new home with Caryn Hetland in Minneota. She happens to work as a special education para-professional at Minneota Public School, which gave Roger a chance to be an occasional guest in classes and at school activities.

He took to those experiences so well that school district leaders thought he had potential to be at school on a regular basis as the district’s service dog.

“He’s incredibly well-behaved,” said Minneota Elementary Principal Jen Mahan-Deitte. “He always just goes with the flow. That told us he could be the answer to something we’d been working on for more than a year.”

Hetland agreed to make Roger, now a 4-year-old adult dog, a candidate for a newly anticipated role as the K-6 service dog for elementary age students. She considered him more than capable of fulfilling those duties. At the same time, she liked the possibility of having her dog at her workplace on a regular basis.

Roger then took part in a rigorous set of performance tests, one that goes well beyond basic dog obedience training.

Examples of what he proved capable of handling include crowds, groups of children, unexpected loud noises, walking past other dogs, and specialized equipment such as wheelchairs.

His service dog activities officially start on Monday. It will be the culmination of extensive on-site training and observation, a process that’s allowed Roger to become familiar enough with his surroundings to make the school a comfortable, familiar location.

“We’re going to start him out with a limited, part-time schedule,” Mahan-Deitte said. “We’ll increase his time in school to a point that works best for everyone. With service dogs, it’s important to consider the dog’s needs as well as his potential to help students.”

Roger’s routine will be structured to differentiate between his own enclosed space and open areas where he interacts with students, teachers and the public.

He’ll spend much of his time in a portion of Mahan-Deitte’s office and at specialized learning areas that serve students individually. A smaller share of his time will be spent working with small groups and with entire class sections.

“The one-to-one interaction is the biggest reason to have a service dog,” Mahan-Deitte said. “He’s the kind of dog who can really help students who are under stress or who have learning disabilities. We’ve already seen him reach out students who really need his attention. He seems to instinctively know when he’s needed.”

Roger is rare among service dogs. Mahan-Deitte said other school districts that have them were encouraged to obtain a purebred likely to have traits that lend themselves to service dog duties.

Instead Roger is part Welsh Corgi and partly at least one other breed. The shape of his face, his wide curious eyes, his loyalty, and his eagerness to prove himself are all characteristics that owners and dog enthusiasts often associate with Corgis.

Hetland said Roger is in excellent health after being a stray in his early life. He has two unusual physical characteristics, a bent tail that was most likely the result of an injury and the combination of a floppy ear and a straight ear which might be the result either of genetics or his early life.

While in school, Roger easily switches between a role of nurturer, that of a playmate, and that of a sentry or guard dog.

He’s been known to bark at a stranger if he hasn’t had a chance to learn how he or she is supposed to be part of things at the school. He enjoys keeping watch on a T-shaped hallway section that lies just beyond his gate at the door of his home base.

“He’s learned a lot about how to interact while he’s here,” Hetland said. “He’s ready to do more things and accept more of a role. I think it’s a positive for sure. I’m happy that he can be here and that he can be really helpful to many of the students.”

The Minneota School District has taken steps to publicly introduce Roger to students, parents and district residents before he officially starts his school-based service.

Hetland said all the feedback she’s received has been positive. Many people have expressed enthusiasm for what a well-trained, socially adept dog could accomplish in a school setting.

“He’s naturally calm, and has a good sense for knowing how to fit in with almost any situation,” she said. “When he walks into a room he looks around to get a sense of what’s happening. Then he finds a place that looks comfortable and sits down.”

Hetland and Roger live within walking distance of Minneota’s K-12 campus in the north section of the community.

Like students, teachers and many community members, Roger is recognized both in and out of school throughout all seasons of the year.

“These days the football players see him outside after school when they go to and from practice at Riverside Park (which comprises K.P. Kompelien Field),” Hetland said. “They wave to him and tell him hello. It’s great when people of all ages like him almost as much as I do.”

She added that Roger’s life experiences exemplify how valuable an animal can become if it’s nurtured, cared for and loved as a pet rather than abandoned and left homeless.

“He owes his life to at least one person who works with animal control,” she said. “Somebody noticed that he was a really great dog, that he belonged in a rescue center instead of being euthanized. That decision is now making a huge difference for an entire school.”