A community effort has yielded great results as a new ice skating rink is ready for winter in Ghent. The rink is used year-round for a variety of activities including basketball. 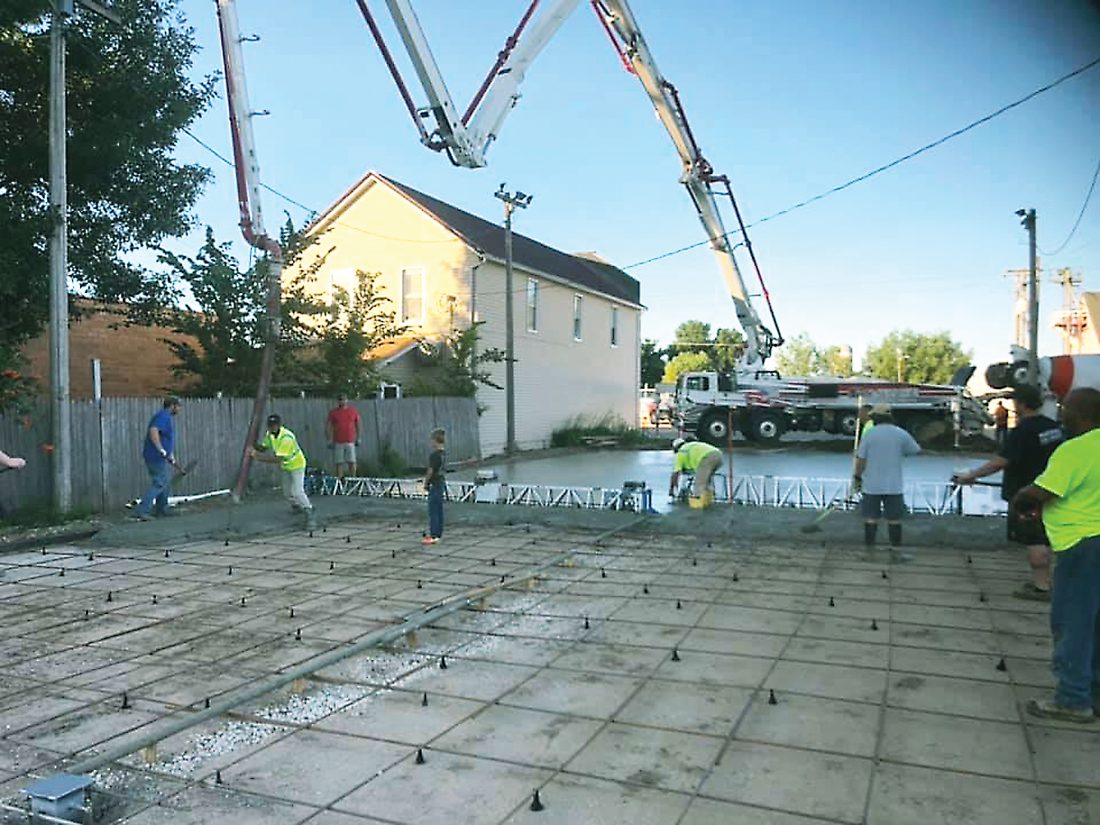 Submitted photo The base for the reconstructed rink was installed prior to finishing the wall frame. The surface will accommodate ice skating in the winter. For the rest of the year, it can be used for basketball, group activities and community events.

A much anticipated moment is on the horizon at Ghent’s community ice rink.

After months of planning and many hours of volunteer labor, Revive the Rink coordinators are looking ahead to putting a seasonal layer of ice on the rink’s new surface. It will mark the start of what’s expected to become the first of many fun-filled winter seasons, along with plenty of year-round activities.

Revive the Rink took shape during the past several years as it became necessary to make some type of change with Ghent’s hockey rink, located near the center of town along Minnesota Highway 68.

“It needed an upgrade,” said Bill Maertens, one of the Revive the Rink organizers. “We decided it would be worth the time and effort. It had been a good thing for kids and families, so we wanted to keep that going.”

Maertens’ company, Bend-Rite Fabrication of Marshall, played an important role in the reconstruction process by providing metal frame materials for the new side wall that surrounds the ice.

Several other construction businesses, including Hess Concrete and Masonry, Hisken Construction, Space Development and Rite-Way Drainage, also took part in the project. The Marshall Amateur Hockey Association was instrumental in its completion by providing the wood for the wall frame and the plastic coating.

Along with improving winter skating prospects in Ghent, organizers decided to make the rink a year-round resource.

Two basketball hoops stand at each side of the rink. They offer the opportunity for full-court basketball or for two different half-court activities from spring to fall.

The rink has also shown potential to act as a site for children’s activities, group games, and special events. It hosted the craft and vendor fair during Ghent’s annual Belgian American Days in August.

“It’s been great to see it getting used throughout the year,” said Bill’s wife, Jodi Maertens. “It happened right away when we first put up the basketball hoops. They were getting used within hours after they were installed.”

Jodi Maertens works as a youth and families specialist for the Southwest Minnesota Foundation. She said Revive the Rink is a good example of a community-based effort to provide everyone with a resource that might not have been affordable strictly with city tax dollars.

Thus far all of the labor and funding for Revive the Rink has come from donations. A sign posted at the side of the rink shows how dollars donated for the project have steadily climbed toward a targeted goal.

“It’s been getting strong public support,” Jodi said. “We’re still working to get more donations. There’s more we’d like to add, including a warming house.”

The rink is one of several components in Ghent’s goals to have a variety of public recreational resources. It’s located six miles from Marshall and has a 2010 census population of 370.

Legion Park on the north side of the community has a baseball/softball field, picnic area, and fully equipped playground.

The south side of town features Bluebird Addition, which combines new housing with a conservation area along Bluebird Creek. The creek is a tributary of nearby Three Mile Creek, which drains into the Redwood River near Green Valley.

Besides its many advantages for soil protection, water quality, and wildlife habitat; the conservation area serves as an environmentally compatible form of flood control.

A paved trail runs the length of the Bluebird area between the neighborhood and the nature area, which offers both exercise and up-close views of the natural surroundings.

“There’s been a lot of planning for the future,” said Ghent City Clerk Dawn Vlaminck. “One of the goals is to have resources that will help the community maintain its population base and grow. The rink project is a valuable part of that.”

She said the rink is fully compatible with the city’s need to carry insurance that covers daily activity on all of its public property.

“It fits in very well with the other kinds of equipment we have in the park and with the trail,” Vlaminck said. “There was a need to improve the rink and make it so that it would stay in good condition. What they’ve done will make it a very helpful long term asset.”

She said the potential for year-round use of the downtown corner space adds many new possibilities for daily recreation, group activities, and events organized either by local community groups or by businesses.

“It’s great that they’re taking a year-round approach,” Vlaminck said. “We’d like to see it serve as a gathering place throughout the year.”