Porter couple having fun with tractors 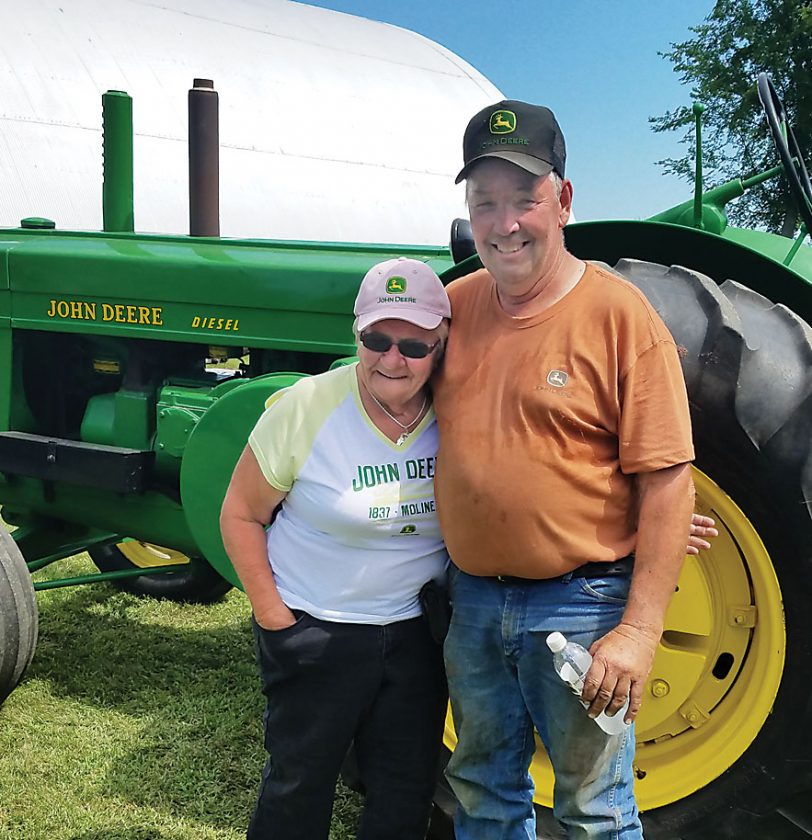 Photo by Mike Lamb Kenny and Linda Hennen of Porter collect John Deere tractors, toys and memorabilia. They share their passion for tractors with their grandson,

Dan Anderson sat in front of the steering wheel on his idling 1950 Ford 8N tractor when he spotted his grandson, Liam Wade.

“You want to come on up?” Anderson asked.

Seconds later, the 5 year old was on the tractor, his head barely seen over the steering wheel.

“It was my grandpa’s tractor,” Anderson said. “I just bought it probably three weeks, a month ago, back from a guy.”

Anderson said his grandfather sold the tractor 15 or 20 years ago. Sitting along the other tractors lined up in a field near Porter, it had rust colorization around the covering over the engine, but that didn’t bother Anderson or his grandson

“It’s the way it looked ever since I was born,” Anderson said. “I use it in town. I live in town. It’s handy for me. It’s good enough for what I need it for, whether I paint it or not.”

Anderson was displaying his new prized possession alongside dozens of other vintage tractors during the Porter Harvest Festival tractor show last weekend.

While visitors walked up and down rows of tractors, Kenny Hennen was busy helping his grandson Coty Jensen move a vintage grain trailer when a booming voice behind him stopped him for a moment.

He didn’t have any problem hearing the question that was directed at him over the sound of idling tractors of yesteryear filling the air.

“Kenny, where in the heck did you find that?” he was asked.

With a black and green John Deere cap on his head and wearing an orange John Deere T-shirt, Hennen, looked right at a vintage grain auger positioned behind him.

“You have to be in the right place at the right time,” Hennen said.

Laughter followed Hennen’s answer as he went right back to moving the trailer.

For more than 10 years, Hennen has been directing the tractor show during the Porter Harvest Festival. The show is all about having a good time, according to Hennen.

“Me?” Hennen answered when asked if he was in charge of the show. He laughed again.

“Can you tell me what you are doing here?” he was asked.

When the final tractor pulled onto the grounds, Hennen’s wife, Linda, drove up in a white golf cart wearing a white and yellow John Deere T-Shirt and John Deere necklace. She also had a pink John Deere cap on her head.

She reported a total of 49 registered tractors for the show. According to the Hennens, that’s about average for the show, which they started when their favorite area tractor show stopped.

“I looked at her (Linda) and I looked at my grandson and said ‘what are we going to do now?’ She said, ‘well let’s do a tractor show.’ We started a tractor show here and it’s been going on ever since,” Hennen said. “The first year we had 50 tractors because one guy had to go back home to get one to make an even 50.”

Organizing the tractor show came natural for the Hennens, according to the couple and their family.

“We’re basically not into ballgames. And all the town celebrations are softball games,” Kenny Hennen said.

His passion for tractors goes back to growing up on a farm.

“This is what I like. It gives me something to do in the winter time. It relieves a lot of stress from my job. I go out in the garage and play,” he said. “Everybody has to have a hobby. You go golfing, go bowling, play ball, go to a bar, play hockey, ride motorcycles. Everybody has got to have a hobby.”

The Hennens own about a dozen tractors, mostly John Deeres. His favorite one is a 1952 John Deere tractor that he rebuilt “from front to back, top to bottom.”

“I spent a lot of hours on that one,” Danny Hennen said.

Evidence of the Hennens’ tractor hobby can be seen in their house as well.

“We do it (tractor hobby) together,” Linda Hennen said. “We both have fun. You walk in my house, it’s all decorated with John Deere stuff from one end to the other. Take our toys — I think we could buy three to four real tractors with just the John Deere toys we have.”

The Hennens’ grandson was busy moving tractors and other equipment around, including the antique grain auger. He helped his grandfather get it all set up to hold a demonstration with real grain fed into it.

“We started out when I was little,” Jensen said. “He (Kenny) had a couple tractors and I kind of stepped into it. But now I’m getting older, so it’s not quite the same. I’m not around as I used to be. I’m getting married and stuff. When I was little, it was quite a bit.”

Jensen’s favorite part of the show is the tractor games. According to Jensen, competitors maneuver their tractors through different setups.

“It’s kind of fun,” he said. “But some of this is a lot of work. But it’s also neat when people are interested in it.”