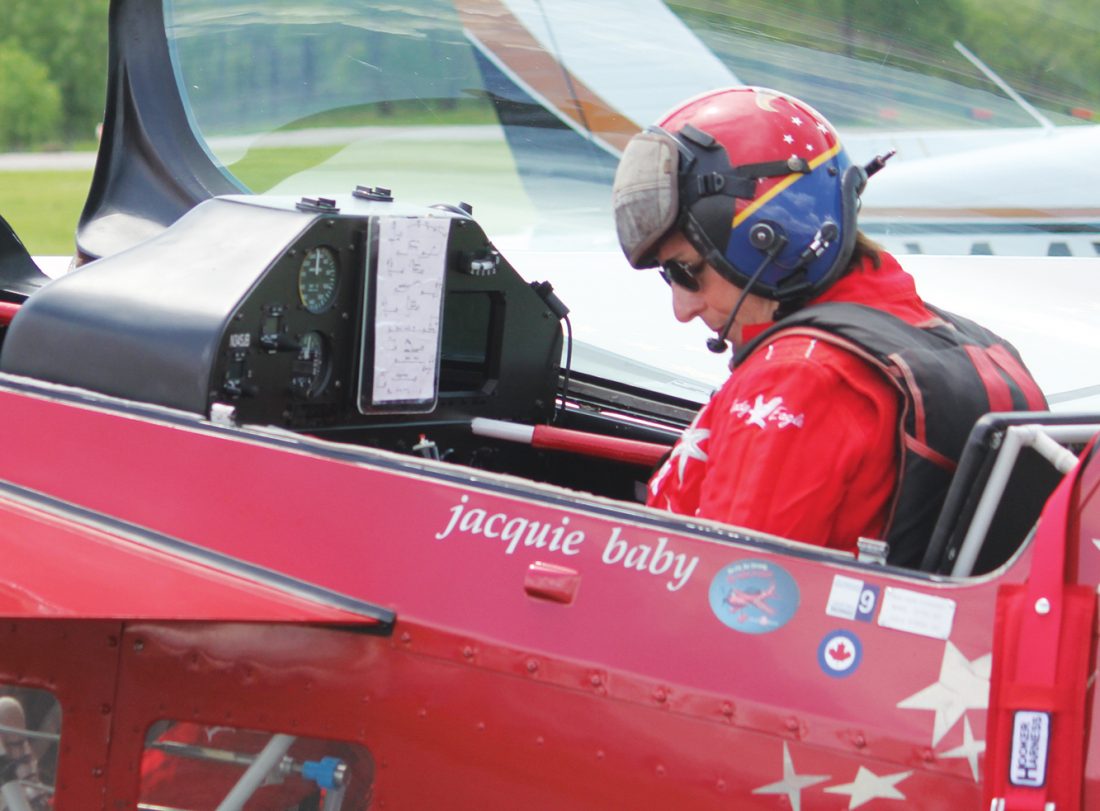 Photo by Mike Lamb Aerobatic pilot Jacquie Warda gets strapped into the cockpit of her Pitts Special biplane.

Fellow aerobatic pilot Bob Richards pushed on one of the wings as Warda guided the tail of the plane. Once the plane was pointed toward the runway, it was all Warda at the controls.

She was wearing her bright red pilot jumpsuit sporting large white stars and “Jacquie B Airshows” displayed along the legs. As she methodically slipped into the cockpit, onlookers could see the words “Jacquie Baby” written on the side.

Finally, she turned on the engines. It was showtime.

Just minutes later, “Jacquie Baby” with Warda at the controls was up in the air — twirling around, climbing straight up, then falling nose first toward the ground, before pulling up again.

As the plane raced over the crowd of onlookers the announcer shared Warda’s story.

“She was 50 when she started flying for an aerobatic career,” he said. “And she’s not hesitant to say that was 17 years ago. You do the math. You are not going to believe what this lady can do in the airplane.”

Warda was putting her aerobatic abilities on display during the June 16 Canby Air Show.

When Warda returned to the ground, a line of air show fans waited patiently for the aerobatic pilot to autograph “Jacquie Baby” flyers to pass out.

While Warda started performing at air shows age 50, she clarified that she has been flying since she was 32. Her love for flying goes back as a newborn when her father, a pilot, took her to the Los Angeles County Air Show. Warda explained that it took years to save up for the expensive sport.

“The feeling of flying is just not like anything on earth. I can’t describe it to you because there is nothing you can do on earth that is exactly the same as flying because it’s totally different,” Warda said.

Richards shares Warda’s love of soaring into the sky.

“It was great. The weather was really good. The clouds were a little bit low, but straightened up,” Richards said. “I did some rolls, some tumbles, turq roll (360 degree revolution) and Cuban eights (figure eight maneuver). A lot of tumbling and flipping around.”

Richards, a stay-home dad of three boys when not flying, performs in a Pitts S-1SS biplane.

“I try to make it look exciting for everybody to watch. I have a routine and then change it based on where I’m at,” he said. “I like the inverted spin. Just coming in spinning and everything is spinning around. And then you have to make sure you roll over with enough altitude to pull out of it.”

Richards went through the Purdue’s School of Aviation program to learn his aerobatic pilot skills. He said it takes years before a pilot is ready for shows.

“There are only eight of these jets in the world. And there is only two of them in the United States that fly the air show circuit. So when you get hired by places like Canby, Minnesota, they like to see an unique act. This is it. You can see the kids love it. Big people love it. It’s fun. It’s a real fun airplane.”

When not at air shows, Jeffries is a captain with United Airlines. He said he flies with a lot of first officers who have flown F-22s and F-16s in the military.

“They freak when they hear about this (micro jet). They freak,” Jeffries said.

“I do the standard aerobatic stuff — end run rolls, the barrel rolls. I did a Cuban eight. The kind of magic of this is the gear pass — now you see it, now you don’t. This is airplane is not able to do some of the things that Jacquie just did, or Bob. But it’s still aerobatic.”