Tobacco in all its bygone glamour 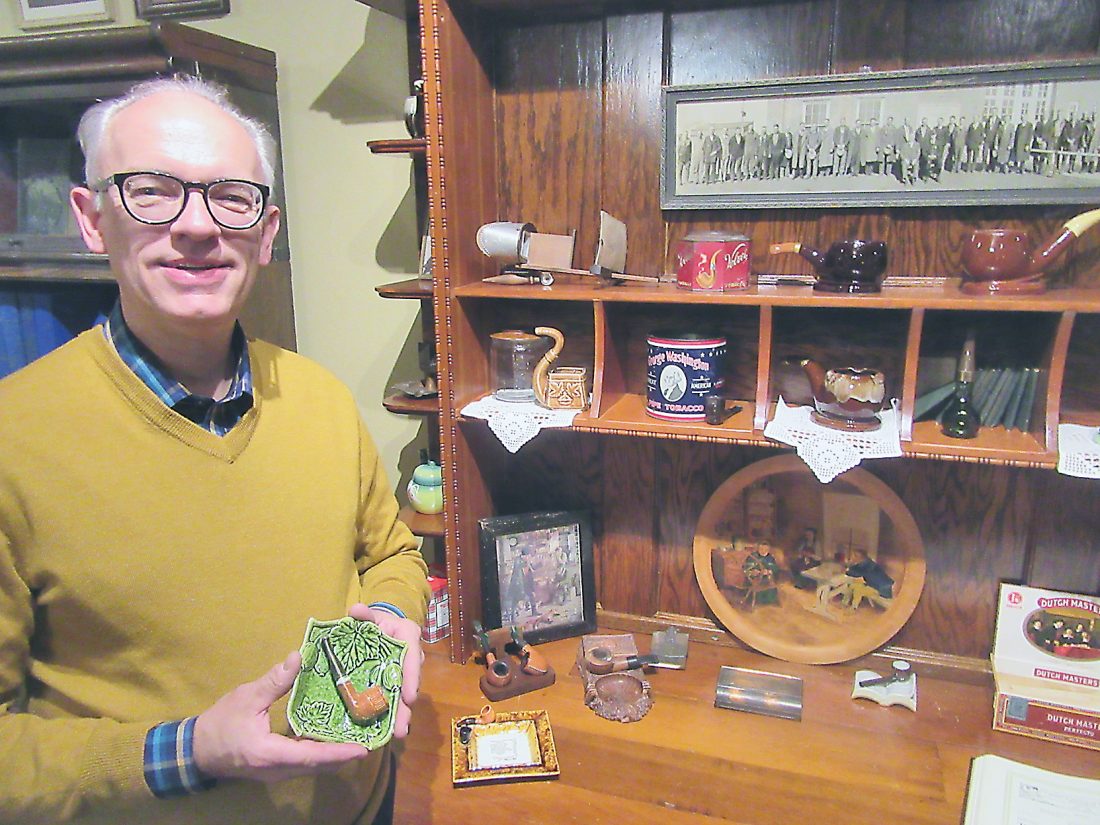 Photo by Jim Muchlinski Mark Schwanebeck of Marshall, who grew up in Tyler, collects tobacco memorabilia and furnished much of it for a display in the Heritage Room at the Lyon County Museum. The display runs through June 15.

Even though tobacco no longer has the universal popularity it enjoyed for many centuries, tobacco artifacts from the past remain popular with museums and collectors.

Items from Mark Schwanebeck’s tobacco products collection are being showcased this spring in the Heritage Room on the main floor of the Lyon County Museum. The idea for a tobacco display began to take shape when museum staff and volunteers were considering potential topics to feature in the Heritage Room.

After deciding that possibilities could be expanded with help from private collectors, volunteer Bev Kenyon thought of Schwanebeck’s wide assortment of tobacco objects.

“I’d seen them and been impressed with them,” Kenyon said. “I knew there’d be plenty to fill up the room. We started with four plastic tubs, then went back for more.”

Tobacco focused largely on pipes became the main ingredient for a gentleman’s parlor concept. The collection is augmented by other objects that were often enjoyed at the same time, such as books, games, puzzles, vintage barware and playing cards.

Kenyon was one of three volunteers who worked with the overall design, along with Ann Carrow and Barb Zick. It makes use of the Heritage Room’s fireplace mantle, antique desk, display cases and closets that are left open for displays on its shelves.

“We had many good choices as we designed it,” Carrow said. “Both the tobacco collection and the Heritage Room lent themselves to a well-rounded display.”

Objects featured include pipes, ashtrays, humidors that preserved the quality of tobacco, advertising, and tobacco tins. Some of the items apply tobacco themes to products such as mugs and planters.

They will be the featured part of the Heritage Room until June 15. At that point, a second topic is scheduled to replace it as part of a planned quarterly display schedule that will be influenced by seasons of the year.

Schwanebeck said tobacco is not his single largest collection, but that’s it’s one of a small handful of topics that take up their own display space in his home.

His parents, Clarence and Ellie Schwanebeck, were “ultimate collectors” who passed along their interest while he grew up in Tyler. His tobacco collection started in Walnut, Iowa, a western Iowa town near Interstate 80 that’s well-known for its set of antique shops.

“I went there with the idea that I wanted to start a new collection,” Schwanebeck said. “The most interesting possibility was ashtrays for cigarettes with designs that included a pipe.”

After finding three of those displayed together on sale for $5 each, he found that most stores and auctions had one or two available at the most. One fortunate flea market stop included meeting a collector who had five of them for sale. When he asked for a discount if he bought all five, the vendor told him he also had 10 more available at home.

Tobacco became part of his collecting interests even though it has very little personal connection. He said the only person he knew growing up who smoked a pipe was his family’s insurance agent (Hank Jacobson, who was also a former Tyler mayor). Hank and his wife, Sharon, gave Schwanebeck one of his pipe collectibles which is displayed along with their gift card.

While that first specialty collection expanded, other related objects become part of his overall interest. Schwanebeck, now retired, related it to his work as a middle school social studies teacher in Marshall.

Historically, tobacco is known to have been in use since at least 2,500 B.C. because of how it’s been found with Egyptian mummies. As early as 1,500 B.C., it influenced Native American legends such as the White Buffalo (when pipe smoke was wafted in all four directions as a symbol of living in peace).

More recently, tobacco has been commemorated through literary characters such as Arthur Conan Doyle’s Sherlock Holmes and movie celebrities such as Bing Crosby.

Since the 1970s, when health warnings were required in advertising to inform the public of a federal Surgeon General’s stance that smoking is dangerous to personal health, it’s been rare to make tobacco a status symbol.

“The difference between then and now is part of what makes tobacco collectibles appealing,” Schwanebeck said. “Health awareness has taken away the glamour and the sophistication.”

He noted that the Heritage Room, created as a permanent main floor fixture when the Lyon County Historical Society moved into the former Marshall-Lyon County Library in 2013, offers an ideal backdrop for pipe and tobacco memorabilia from an era when they were symbols of “the good life.”

“It’s been great to see much of the collection displayed in the Heritage Room,” he said. “I can almost envision someone from the past walking in with a smoking jacket and filling his pipe.”