It seems like anyone can pilot a plane these days — but you don’t have to worry about crashing when you fly one on a computer screen. Virtual planes and miniature radio-controlled flyers were on display last week at the Market Street Mall. 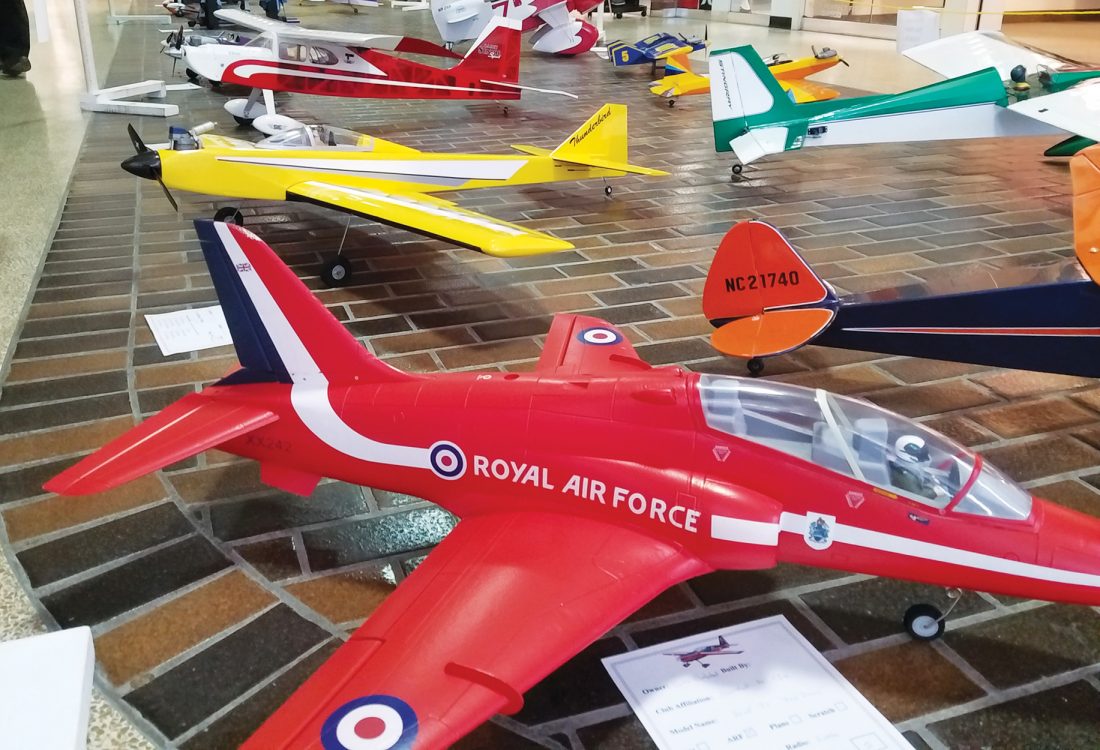 Photo by Mike Lamb A variety of model airplanes were on display inside the Market Street Mall in Marshall on April 28.

Wearing an Academy of Model Aeronautics cap, John Gullickson intently looked straight ahead, his fingers resting on the controls.

“There it goes again, I really did a number on that one,” Gullickson said. His airplane just crashed, but it will be OK. The airplane was flying on a laptop computer screen. He was flipping the levers on a hand-held controller.

He was also sitting at a table inside the Market Street Mall in Marshall on April 28 for the annual model airplane show. Model planes big and small were on display up and down in one of the mall hallways. One table displayed miniature flying helicopters and a drone sat in one corner.

Anything that can fly by remote control was on display. And Gullickson, who is the secretary for the local model plane club, has seen it all over the years.

“How many years have you been doing this?” Bob Cole asked as he watched Gullickson fly his plane on the screen.

“More than I care to mention,” Gullickson said before laughing. “I started out in models when I was about 10 years old. I’m 80 now. Radio control has only been around for probably from ’60s or ’70s.”

When he first started, Gullickson explained that the model airplanes were connected to ends of wires and went around in a circle.

“That still goes on, but radio control has really overtake it quite a bit — controlling airplanes by radio,” Gullickson said.

He said there is an advantage in playing with the computer simulator because you don’t have to worry about damaging an airplane after a crash.

“You can fly here and do what I’ve been doing and smash it into the ground. They (planes) right themselves and away they go again,” he said.

Gullickson said if you crash a real remote control plane, it could be up to three months’ work in repairs.

“Here, it doesn’t cost you too much,” he said. “There’s a saying in the hobby. There are pilots who have crashed and pilots who are going to crash.”

“You can pretty much control as far as you can see them. But if they get too far out, they might get out of range,” Cole, the club’s treasurer, said. “Many things have changed in the hobby. The materials are a lot different. Used to be all wood. Now it’s plastics.”

Down at the other end of the long line of planes on display, Steve Pruitt talked about his “big old glider.”

“It’s just a glider. It’s not an aerobatic plane,” he said. “I added a little bomb glider underneath it, You can fill it up with powder or candy and drop it and it splits into two. I can put another drop under there dropping more parachutes or candy packs for fun flights for the kids.

“Then there is a camera mount that I haven’t installed yet, but I will have some real nice video with that. This will be just a big old flyer.”

Pruitt said he has been building planes on and off since 1968. He balances his interest in model planes with a passion for cars.

“It seems like I get into it (planes) pretty hard and heavy for 5, 10 years, then I start showing cars,” he said. “I enjoy building. A lot of guys like to buy — have ones that are pretty much put together or partially put together. I still like to sit down at the table. It takes me a year to build one.”

Gullickson is more into the flying part of the hobby.

“I’m more of the type of guy that would probably go to a hobby store and I’ll see the plane hanging from the ceiling. ‘Yea, I’ll take that one,’ It saves me several hundred dollars,” he said while laughing.

Another club member, Vince Laporte, has advanced his hobby into drones.

“I’ve done this for 30 years,” he said. “About five years ago I decided to learn helicopters. Then two years ago drones — which is sort of an extension to helicopters.”

Gullickson said the hobby offers a lot of options depending on the person’s interests.

“It’s a great hobby. There’s something in the hobby for everyone,” he said. “Some fellas like to build planes, some like to fly planes. We got fellas in the club that fly off of water on platoons and you got guys who fly inside. And some of that goes on in the winter time.”

A a guide to RC airplanes