A day to dabble

A couple hundred students from six area schools got together recently to get a taste of the different kinds of art. Art teachers organize it for their students and schools take turns hosting the annual event. 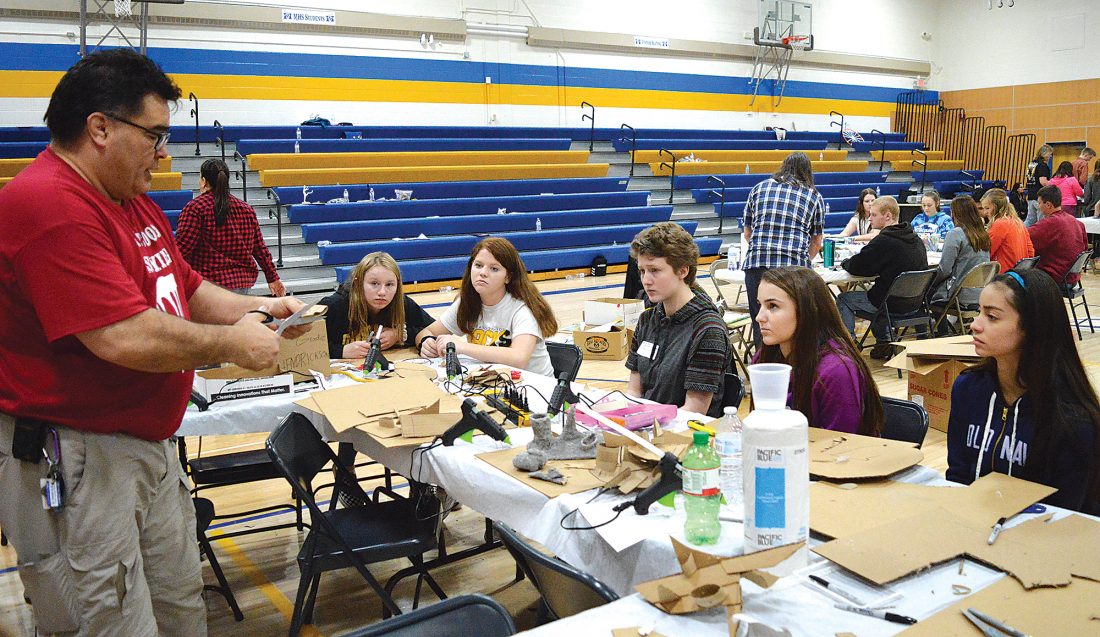 Photo by Jenny Kirk Artist John Sterner demonstrates one of the steps in the process of making a paper mache clay mask to several area students in a session during an art integration day recently at Minneota.

“It’s an integration group, with all the schools in it together,” Minneota art teacher Scott Hanson said. “The state gives money — it’s used for other things, too — and the art teachers get together and host an art day. All the schools take turns hosting it.”

“Robin Henderson — she’s from YME — is the one who has control over the money,” he said. “She helps organize and has to write reports to the state. It’s not a guarantee that we get the money every year, but it’s such a good opportunity for kids.”

Hanson said 65 students from Minneota took part in this year’s art extravaganza. Junior Sean Dilley was one of them.

“I really like it,” Dilley said about the event. “It’s just a fun way for people to take a break from school and do some art. A lot of people don’t try an art class necessarily, but they do try art here. It’s fun overall.”

Students had the opportunity to select from 14 different sessions this year.

“We got a sheet about two months ago and what we did was circle our favorite ones — of what we thought would be fun — though we might not have gotten exactly what we wanted,” Dilley said. “We get to go to four actually. The (Dakota) horses one, that was really fun. I get to go to alcohol ink next and then Japanese origami.”

Dylan Bach found the experience of making a paper mache clay mask very interesting while in a session with artist John Sterner.

“It’s pretty neat,” Bach said. “I’ve never done anything like this before.”

“That was good,” Bach said. “They had little metal stencils and then you got to tap (each letter) with a hammer.”

While all the other sessions took place in Minneota’s gymnasium, Ufkin and any students signed up for the jewelry-making class ended up having to re-locate to the art room because the activity was so noisy.

“I knew as soon as we started we were too loud (to be in the gym),” she said. “They’re hand-stamping their own metal blanks and some kids were hitting the hammer too hard.”

Husband and wife Oak Kelsey and Michele Knife Sterner teamed up to present the session on Dakota horse art.

“We have them doing traditional ledger art with Dakota horses,” Sterner said. “They learn about traditional use of ledger art — how it came to be. It’s an oral-based society, so we didn’t have written language, so people drew their history down. We showed them examples online and we showed them that people still do it, so the modern equivalent of it.”

The students then replicate the work they’ve seen — the majority of which Sterner said was Plains Indians artwork.

“Originally, it was done on ledger paper, but then we also have music paper that they can choose from,” she said.

Sterner said this was the first time she and Kelsey presented a session together at the art extravaganza, but that both of them had done several solo sessions in the past.

“Last year, I did a chalk-drawing session and then I did a stenciling one a couple years back,” Kelsey said.

“I’m having fun,” Donner said. “I just made up (my design). I did the alcohol tile paints first and then we did pointillism. I did a chicken. It’s fun.”

Irvine said she especially liked experimenting with the alcohol ink.

“I tried making a flower, but it didn’t work out,” she said. “It was still fun.”

“They donated all of this,” he said. “They were very generous, so I share with all the other schools. I’ve got boxes of it.”

Hanson pointed out that students did an art pour on the stage.

“It’s where you take paint, put an acrylic base in it and then you add flood (additive),” Hanson said. “A lot of times when you’re painting, you add flood to your paints and it’ll make the paint just flow. You won’t see any brush strokes. So the students did some flood work up there. They added a silicone — just a couple of drops to the paint — so it creates all these different cells in there. It’s kind of this abstract type of art.”

“They were all a little bit different,” she said. “One was a pendulum and ours was on a spinning wheel. The pendulum one is just incredible. We just used a pottery trimming wheel, put a ruler on it and made it go. But you have to use certain ingredients in your paint to get them to pour like that.”

Twenty-one Dawson-Boyd students participated in the art extravaganza this year. While the students learn a lot while at the event, Demers said her students also experimented beforehand and then shared the art technique with younger students.

“I incorporate a lot of the lessons from it at home before we come, so it’s not just a one day and done thing,” she said. “We taught three different classes in the elementary how to do art pours, but we experimented with it ourselves first. We tried it so we knew what we were doing before we came here.”

Throughout the day, Demers helped students with their pointillism projects.

While the day is set up to give students different art opportunities, the teachers and other presenters also seemed to enjoy the experience.

“My kids will tell you I’m ultra-excited about this day,” Demers said. “I love art day.”

President Trump goes on clemency spree, and the list is long