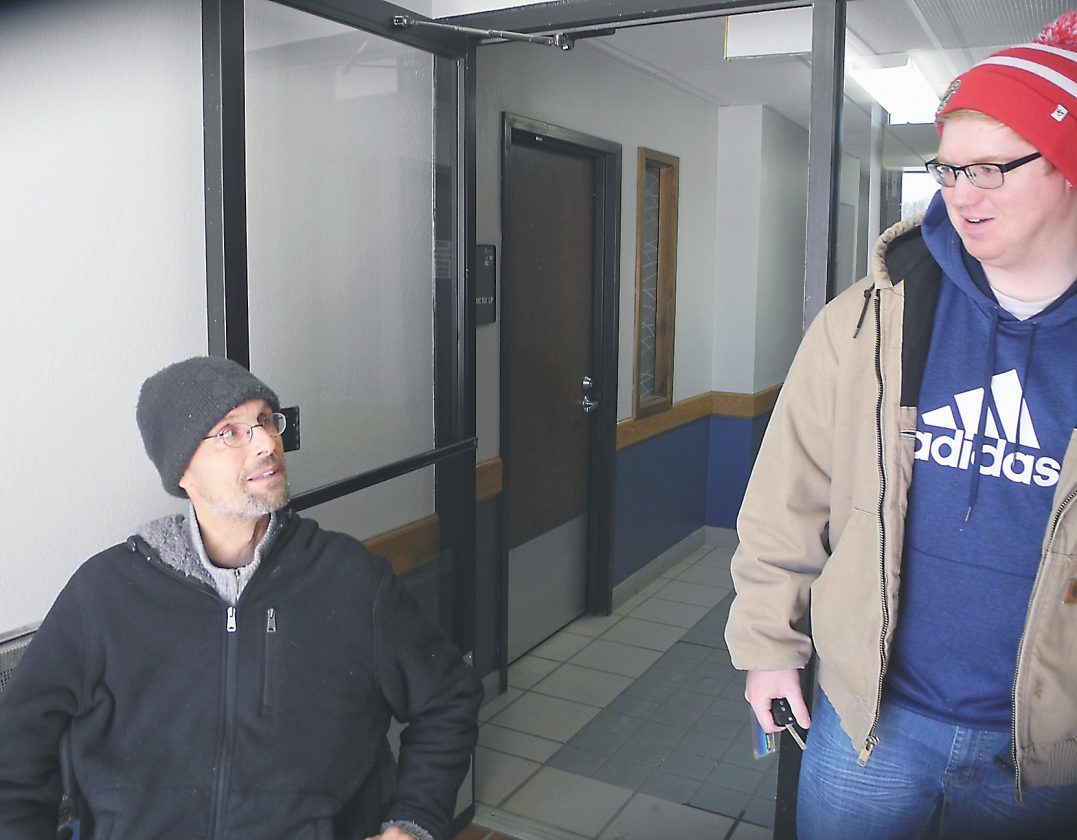 Like most Minnesotans, Ted Stamp doesn’t blink when he’s confronted by harsh winter weather conditions first thing in the morning.

Instead he carries on with his daily routine, preparing to make the trip from River Winds Apartments on Jewett Street at the east end of Marshall to the downtown offices of his employer, the Southwestern Center for Independent Living. After a morning of work as an independent living advocate for others faced with disabilities, he carries out the exact same process in reverse order.

During a ride-along from work to home on Monday, Stamp explained many of the hidden details that create extra obstacles in a harsh winter for people who have limited mobility.

At the same time he demonstrated how determination, composure and a positive frame of mind can help anyone function effectively in all but the worst seasonal weather challenges. That ability doesn’t necessarily have to be restricted by age, physical fitness level, or disability status.

“I’m not any different from others who have a commitment for getting to work or to school whenever it’s possible,” Stamp said. “We try to find a way to make it happen. It’s all about doing our best and learning from experience.”

Stamp has served as part of the SWCIL staff for 12 years. His unexpected path in life began on a warm, bright summer day when he was a teenager. His summer job at the time involved performing seasonal work for the Huron, S.D., parks and recreation department. The job allowed him to be outside and to earn money while keeping an active routine.

All that changed instantly when having fun with friends during a break at work unexpectedly caused a severe spinal injury. It left Stamp paralyzed from the waist down and also unable to use his hands for basic everyday tasks.

He described the situation simply as a “huge change.” He said it was most difficult at first, when he was going through a six-month stay at Sioux Valley Hospital in Sioux Falls, S.D., followed by another half year living with his parents.

From there, Stamp received help in developing life skills at the Courage Center in Golden Valley. He was then ready to live for a year at an apartment in New Brighton with a friend from high school who served as part of his caregiving team.

Next he was ready to pursue a four-year degree at Southwest Minnesota State University. As a major, he selected literature/creative writing because of how it matched two of his favorite activities (reading and also putting his own thoughts into words and paragraphs). He later added the goal of secondary education, which involves earning a grades 7-12 teaching license, because of his interest in helping others.

After a first post-secondary job as an Adult Basic Education tutor for English as a Second Language, Stamp began his role as part of SWCIL’s team of professionals who provide guidance for people with all kinds of disabilities. He’s worked as a part-time independent living advocate for 12 years.

He said a major part of his work involves advising others as they set goals for the future. It requires looking ahead to some short-range intermediate steps that will ultimately lead to a broader set of lifetime achievement objectives.

“For all people, every experience helps,” Stamp said. “Everyone lives and learns. I try to take things one day at a time, and to find ways every day to enjoy life.”

He added that it’s proven important to achieve as much as possible both with a career and with life outside the workplace. He’s written a memoir about his life experiences, and is now in the process of writing a second book.

He enjoys spending time in a third floor community room at River Winds, located within 30 feet of his apartment door. The room offers plenty of natural light as well as wide open views of Marshall.

“Simple things are valuable to me,” he said. “They’re available throughout the year. I always enjoy a day when there’s sunshine.”

The task of getting to and from work with winter at its peak presents a few challenges. Combinations of snow and slush often make it hard for a paraplegic to maneuver a manual wheelchair with wet hands. For those who use a power wheelchair, it’s at times problematic as to whether or not it will lose traction and skid on a slippery surface.

Stamp said he’s learned that it’s OK to accept help when it’s offered, and even to ask someone when help is definitely necessary. During Monday’s ride-along, others helped him to put on and remove his winter hat. The driver and dispatcher of the United Community Action transit service arranged on-the spot for him to arrive home at the usual time by making a slight change in the mid-day pick-up schedule.

The trip home also had its share of fringe benefits. One of them occurred as Stamp and one of his SWCIL co-workers enjoyed a short conversation in the hallway.

SWCIL Executive Director Melissa Doherty said Stamp has a combination of communication skills, desire to help others, and experiences that enable him to serve as a valuable member of the agency’s team of professionals.

She added that his ability to reliably arrive at work with enthusiasm for doing his job is a consistent example of what everyone can accomplish with a dedicated approach to personal goals.

“One of the things Ted proves is that people with disabilities are basically the same as all other people,” Doherty said. “We all face obstacles in a winter like this one. Some days it’s not very pleasant for anyone to have to be somewhere at a certain time. We’ve all had to make adjustments.”