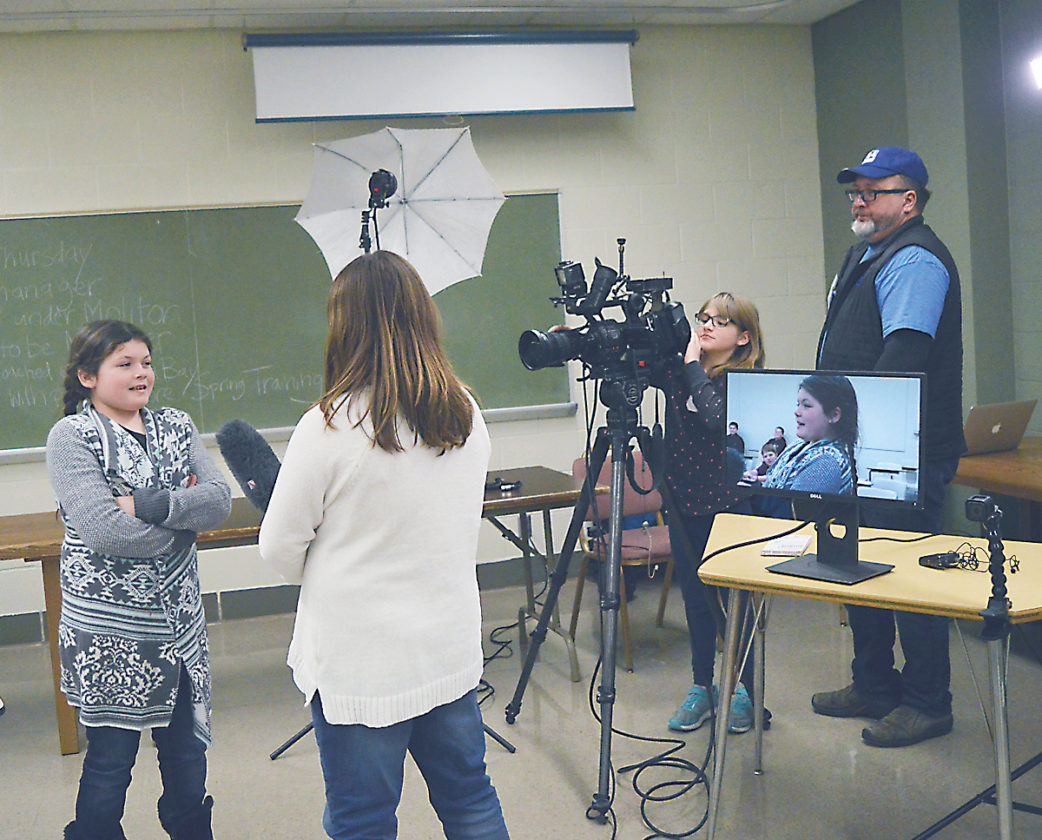 Nearly 500 students had the opportunity to transform their imaginations into actual stories during the 27th annual Conference for Young Writers presented by Southwest West Central Service Cooperative on Wednesday on the Southwest Minnesota State University campus.

While several of the 17 presenters were published authors who offered plenty of inspiration, the overall message conveyed throughout the event was that for a writer, the possibilities are endless.

“I really liked the conference and I learned how to write stories for a TV show and how to make stories more 3-D and not just standard,” Canby fifth-grader Kaylee Demmer said. “I like writing. What I like about it is that you can do whatever you want. You don’t have to do what someone else tells you to do.”

“In order to get a story put together, like the ones you just wrote, we need to have an interview and we need to get video,” Lauritsen said. “The interview is the key for the writer — in this case, me as the reporter. I have to have information that I can write to. Tony is going to have video he shoots. The funny thing is, the stuff he shoots, I will write to as well. That will be part of my writing, too.”

As he spoke, Peterson zoomed in on the students sitting in the classroom.

“If he gets a shot of you guys in the class, like what you’re seeing on the monitor right now, I’d report that a bunch of smart kids at Southwest State gathered today to learn about writing TV news stories and other things.”

Several students then had the opportunity to role play in front of their peers. Clarkfield Charter student Kendra Jahn operated the enormous camera with a few tips from Peterson, while Tracy Area’s Aliyah Loftness interviewed Baylee Staton, who attends school in Benson.

“The very first question you should ask if what their name is and how to spell it,” Lauritsen said. “Then, open-ended questions are the key to getting a good story. ‘Why do you think this happened? How do you feel about it?’ And then the last question should be, ‘Is there anything else I should ask you or that you want to share?'”

The trio of participants followed a mock storm aftermath scenario.

Demmer then took on the role of the person being interviewed by volunteer anchor Hazel Vetsch from New London-Spicer Prairie Wood Elementary while Tracy Area’s Ada Moua took over photographer duties.

“I lost my house in the flood,” Demmer said in response to being asked about the mock scenario. “I feel really bad for everyone who was affected.”

“I haven’t been to the Writing Conference before, but I’ve been to the Artists’ one,” she said. “I’d like to come back here.”

“I think the best part about this conference is that kids are using their imagination to create their villains, their characters,” said event organizer Andrea Anderson, who is the student activities coordinator for SWWC Service Cooperative. “I actually spent some time in classes and got to hear some kids creating their characters, whether it’s from Apples to Apples cards or from props, trying to write great stories from those.”

That message was a positive one for James Sik, an eighth-grader at Marshall Middle School.

“I don’t like sharing my work,” Sik said. “I like that I can just put my thoughts on paper and keep them there and not have to talk about them to anyone other than my mom and the people close to me.”

Sik’s mom, Rebecca, was among more than 130 chaperones to accompany participants at the event.

“I think a lot of writers do take what’s inside and share it that way instead of other ways,” she said.

While James Sik said he was enjoying the conference, he was somewhat disappointed that the presenter for the “Music as Mood” session wasn’t able to attend.

“I’m sad that I didn’t get into my first choice because the person that was supposed to teach it wasn’t here,” he said. “It was the music class.”

Sik did have the opportunity to attend James Zarzana’s “Monsters from Your Mind and into Your Writing” and Kathryn Sullivan’s “Human, Alien or Monster” sessions.

“I did mention this morning, too, that we have a Creative Writing Contest and the deadline for that is coming up January 19, so I told the kids that if they start a story here (Wednesday), they can finish it up at home and submit it for the contest,” Anderson said. “I’m hoping the kids do that because they appear to have really amazing imaginations.”

Wood, the creator of 37 books for children and adults, started off the day by trying to spark interests and connect with the young writers during his keynote presentation.

“We had a good first hour,” he said. “Hopefully we got everybody going and thinking about writing and thinking about being a writer and maybe a little bit of inspiration on top of that. In the keynote, my main goal is to inspire and just get them ready to have a great day. I tell a little bit about my personal story and then in these small groups, I go a little bit more in-depth about how I became a writer and what some of the roadblocks and hazards are along the way.”

Wood shared his own journey, going from being the worst reader in the class to becoming a bestselling author.

“(In the “Writer’s Path” session), I talk about the three most important things you need to know to be a writer,” Wood said. “I also share some tricks and skills to learn along the way that help. Then we spend about 15-20 minutes writing in here.”

In the third session, which included third- through fifth-grade students, Wood encouraged them to be any kind of writer they want to be.

“You can be a writer, whether it’s for cookbooks, hot rods, murder mysteries or something else you’re interested in,” he said. “What you’re doing (Wednesday) is called descriptive writing. That’s the assignment I gave you. But there are many different ways to be a writer.”

While the mood was oftentimes serious as the young participants listened and created, there was also humor incorporated in many of the classes. Blumer asked the boys to be creative about describing what Jill might look like. Jill ended up having three eyes, green skin and a claw in addition to having a turtle on her shoulder. The girls in the session decided that Jack was bald, had horse legs and tentacles and was tall. After several moments of laughter, Blumer cast a magic spell.

“You just designed your senior prom dates,” he said.

Before talking about the hook in writing, presenter Patrick Ryan got the students thinking by asking a pair of volunteers — MCC’s Alex Schuur and Luverne’s Hallie Pergande — to come up with as many words without the letter “A” as they could think of in 60 seconds. Ryan then took his turn and rattled off an amazing number of words — all of which were numbers in consecutive order.

“You can play that game with your parents or guardians,” he said. “You can go all the way up to a thousand before you get to an ‘A.'”

Al Batt, one of four new presenters this year, humorously engaged students in the session called “Now That’s Funny.” Along with Wood, Jennifer Davidson (“A Prop-tastic Beginning”) and Lacey Louwagie (“Journaling”) were first-time presenters at the event.

“There were some different classes that did improv acting,” Anderson said. “The kids had fun with it. They were changing their voices, putting in an accent. It was really cute. In so many of the classes, the kids were working very intently. You could definitely see that they were processing everything the presenter was saying and they were trying to come up with that cool, unique story.”