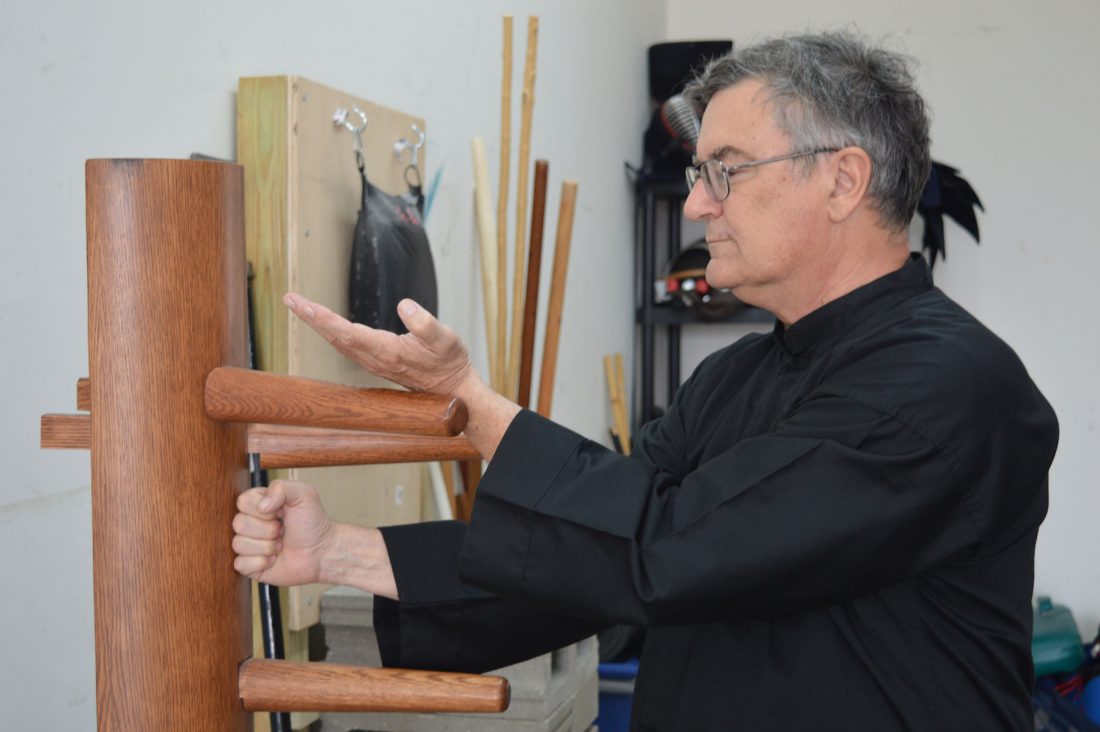 MARSHALL — Like a lot of Minnesotans, last winter Stephen Browne found himself to be pretty much a couch potato.

“When I wasn’t sitting down I was lying down,” he said. In his late 60s, he began to feel like he was starting to “rust.”

He was feeling achy in his hips and shoulders.

He decided to take up his old pastime, martial arts.

“I learned judo as a teenager and did it on and off. I didn’t take it seriously until my 30s,” he said.

To help other people who want to “keep moving,” Browne opened Marshall School of Martial Arts a couple months ago. His space is located on West College Drive on the St. Aubin Drywall property across from the Lyon County fairgrounds road.

“Setting up a school is something I always meant to do eventually,” he said.

Browne, who lives in Milroy, and is originally from Oklahoma, is ranked Dai Saam, third-degree black sash in Wu Wei Gung Fu and Blademaster in the Mushin Kan system under John Douvier in Oklahoma City, holds a Lakan Issa first-degree black belt in the Kombatan system of Filipino Arnis de Mano awarded in Dahran, Kingdom of Saudi Arabia, and is an instructor of other styles of Filipino Kali-Escrima.

He teaches Wu Wei Gung Fu. Gung Fu is the Cantonese pronunciation of Kung Fu, which means “the rewards of hard work.”

Wu Wei Gung Fu is “southern Chinese,” Browne said. “Legend has it that it was invented by two women a couple centuries ago” to compensate for the male superior reach and strength. It uses shorter stance and short in-close movements.”

Browne said these movements use “all your major joints” and plastic sticks “add some resistance.”

Deanna Larsen also teaches classes at Marshall School of Martial Arts. She received her 1st degree black belt in Tae Kwon Do from American Karate Studios in 1988. She started training Kali, Jeet Kune Do and Muay Thai at the Minnesota Kali Group in 1991. Larsen is an associate instructor under Guro Dan Inosanto of the Inosanto Academy of Martial arts in Filipino Martial Arts and Jeet Kune Do. Instructor under Guro Mike Omelia in FMA and JKD. She is the program director of Warrior Martial Arts Program. Larsen a teaches self-defense seminars nationally to women and children.