‘Something new and exciting’ in Marshall 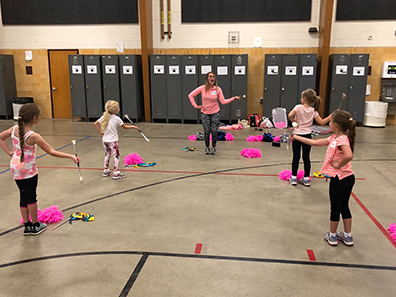 MARSHALL — Someday Marshall High School might have majorettes added to its marching band program. They might be among the four young girls who participated in Kayleigh Kontz’s inaugural twirling and dance class, which started Oct. 22.

Kontz, a three-time world baton twirling champion, has competed regionally, nationally, and internationally. She was a member of Team USA in 2009, 2012, and 2015. Her twirling career has given her the opportunity to compete in Belgium, Switzerland, and Italy. In addition, she has won multiple individual and team national twirling titles.

Kontz started baton twirling at the age of 4, keeping up with the activity for 19 years. Her passion for twirling has not waned and she has recently opened KayKo Studio in Marshall. The first class started Oct. 21 and meets once a week for seven weeks. The Monday class has four students. She said she likes to keep the classes to no more than six students for more personalized attention. The classes last for 30 minutes and meet at the National Guard Armory on Timmerman Drive.

“I really have enjoyed Marshall,” she said. “But I’m super passionate about twirling and this is one of the things that I miss the most. I taught baton in Omaha and wanted to introduce this to Marshall. This is just something new and exciting. We’ll see how it goes.”

Kontz said there are many benefits to baton twirling.

“Not only flexibility, timing and music awareness, but there are many opportunities from baton,” she said. “I’ve gotten the chance to march in the Macy’s Thanksgiving Day parade in New York, compete overseas and the three times I did compete I won gold, so that was super fun.”

Kontz said she twirled with the marching band at her high school in Omaha and it would great to have it added to the Marshall Tigers.

“These girls are 5 and 6 now when they start, when they get to high school and then go on to college, there are awesome scholarships,” she said. “Not many people know that.”

Dance is incorporated in the class, but the main focus is baton twirling. Kontz added that the dance is more like pom pon or cheerleading.

At the first class, Kontz gave each girl a baton, measuring the baton to their arm to get the right size. After a warm-up including stretches and jumping jacks, Kontz taught the girls a few moves.

The first trick is called vanilla and chocolate ice cream, she said, telling the girls to dip the baton in the “vanilla” to their left and then dip it in the “chocolate” to their right.

It was at Creighton University where she met Hunter Kontz, a Marshall High School grad Class of 2012. The two are coming up on their first wedding anniversary in November.

Kontz plans to hold registration in December for the next class sessions which will begin mid-January.

For more information visit https://www.kaykostudio.com and her Facebook page.