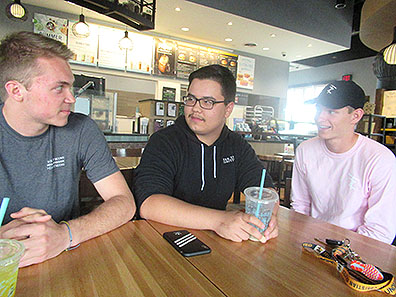 MARSHALL — It all began with a school project.

It started when Terfehr and Zahrbock worked on a school project involving the production of a video of Marshall with Zahrbock’s drone.

“We kinda were just asking ourselves what can we do with this video? We stumbled on the idea of a clothing line and a clothing company,” said Zahrbock, the designer for TZ Clothing.

“I came up with a bunch of different designs for TZ and then we settled on what you see now,” said Terfehr.

Terfehr came up with around 20 designs before the they agreed on the logo.

“When he sent that picture, to me my eyes were immediately drawn to it. It wasn’t just the classic TZ, it had these angles and little details,” said Zahrbock, “I was like we’re doing this one.”

Leach, not originally a part of the group, was brought on to assist with the marketing and promotion of the company.

“Eric is a good man to have — he’s very smart with marketing,” said Zahrbock.

According to Leach, the three have grown up together in Marshall.

“We’ve been friends for I don’t know how long now,” said Leach, the marketing manager with TZ Clothing.

Leach, Terfehr and Zahrbock always try to stay positive in their daily lives and wanted their company to resemble that. Their motto, “seek the positive,” conveys that ideology.

“We wanted something we could all believe in. We all strongly believe in no matter what situation you’re put into, because everyone has different situations and things that they go through in life, we think you can take the positive out of every single experience you have,” said Zahrbock.

The group is in the process of switching websites again, but they have created a website in order to sell their products.

“Right away we used a website builder, and that was pretty expensive for what we wanted to do, so we switched over to a cheaper option. That allowed us to bring down our prices, and have more flexibility with the content and how we show it,” said Terfehr.

The group said they do work with distributors, so their products come directly to you.

“We’re working with distributors right and it gets sent straight to your house,” said Leach.

Even though the company already has released four collections on its website, tzclothing.com, it is in the process of creating more. According to the group, one of the biggest goals within the company is highlighting Marshall and that small towns can do big things. They hope to show that in their next release, the Hometown line.

“This actually ties back in to what Parker and I did last year. We used (my drone) to get a video of Marshall last year, and we thought it would be a good idea to come out with a Hometown line kind of showing what Marshall has to offer,” said Zahrbock. The group plans to highlight significant structures and buildings within Marshall, such as the 9/11 memorial.

“So we’re just going to go out and take photos of things in Marshall, like the water tower. We have the coordinates of Marshall that we’re going to put on there too. It’s just things that we think that a lot of people in Marshall can connect to,” said Zahrbock.

The group plans to continue promoting the business through Instagram, _tzclothing, and word-of-mouth.

“Instagram is a big help for us,” said Leach.

“I think a lot of people our age use Instagram very frequently and I think it is very good platform to get our message out there. So, focusing on social media and word-of- mouth,” said Zahrbock.

“Right now we’re trying to set up the business so all we have to worry about is coming up with new designs,” said Terfehr.

“We’re trying to get all the little things while we’re all still in town,” said Leach.

By attending different colleges they believe they can spread the word at each college and outside of Marshall.

“We’re all going off to college, so I feel like we’ll be marketing with word-of-mouth with a lot of different people,” said Zahrbock.

Business briefs for May 12

SMSU grad Hellie named president of North Star Mutual in Cottonwood Pete Hellie was elevated to the position of ...

Hill returns to Ralco Ralco announces the return of Dr. Jeff Hill to the company as a brand manager. In his new ...