Getting to know Marshall — one hot dog at a time 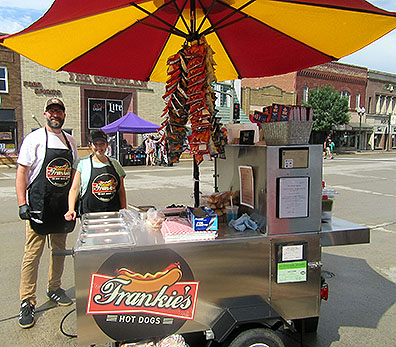 Photos by Karin Elton Chad and Sarah Kisner are the owners of Frankie’s Hot Dogs. The food cart appears at various businesses around Marshall and also can be seen at festivals and events this summer.

MARSHALL — The Frankie’s Hot Dogs cart was a big hit Thursday at Marshall Crazy Days. People were lined up to get a hot dog, chips and a soda in-between hunting for bargains.

“This is our first event,” said Chad Kisner, who co-owns Frankie’s Hot Dogs with his wife, Sarah Kisner.

The two set up at different locations in Marshall during the week — Ace Hardware, Guidepoint Pharmacy and Borch’s. Additional businesses are asking them to set up their cart onsite as well.

“US Bank wants us to come,” he said. “We’re trying to schedule that.”

Kisner said the hot dog cart has been “a lot of fun.”

The Kisners moved to Marshall from eastern Iowa about two-and-a-half years ago.

“This has been a good way to meet more people and get connected to the community,” said Chad Kisner, who works at Archer Daniels Midland.

Sarah Kisner said she and her family enjoyed getting a hot dog from a cart back in Iowa.

“We’d each get a hot dog, sit by the river and enjoy the afternoon,” she said.

They first opened their hot dog cart in May. They say the “long 2018/2019 winter season gave us plenty of time to perfect our blend of special seasonings that get added to the cooking water. The all-beef hot dog gets placed on a steamed, fresh baked bun.”

Condiments and add-ons include ketchup, mustard, jalapeño and banana peppers and chopped onions.

In addition to businesses around town, Frankie’s Hot Dogs will be at various festivals around the area such as Sounds of Summer in Marshall.

Newcomers to the food cart business, they are learning as they go.

Eleven US troops flown to medical centers after Iran strike