New plans for the Lodge 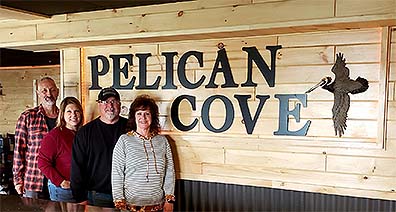 Submitted photo Chuck and Robin Cessna, Lance Rogers and Tami Brink are the new owners of Lake Shetek Lodge on Valhalla Island. A new restaurant, Pelican Cove, is being added.

SLAYTON — The countdown has started for the 2019 opening of the renovated Lake Shetek Lodge on Valhalla Island.

New owners Lance Rogers of Wilmont, his fiance Tami Brink, and distant relatives Chuck and Robin Cessna have a mid-May target date to open for the season. Plans include the start-up of a restaurant called Pelican Cove, which is being created from space that was formerly a large ground floor lodging unit.

The partnership took shape when Chuck and Robin traveled to the Upper Midwest to visit relatives on Robin’s side of the family. She recalls enjoying summer days at Lake Shetek while visiting grandparents, and is one of Tami’s cousins.

“We’d (Chuck and Robin) talked about someday having a place on the water, a home that could also provide a business opportunity,” Robin said. “We’ve been open to possibilities in different regions of the country. When we heard about a lodge for sale at Lake Shetek, we saw possibilities.”

The timing was also favorable for Lance (who is part of a family farm partnership in Nobles County) and Tami (who works in Worthington for State Farm Insurance). By combining their resources, they paid $540,000 to purchase the lodge and beach front. The agreement was finalized Dec. 18, 2018.

Since the first of the year, they’ve set in motion several strategies aimed at ensuring that the lodge remains an active place.

A big change will be the addition of Pelican Cove. It’s expected to become a useful counterpart to the neighboring Key Largo supper club

Robin, who has a professional background in the restaurant business, plans to offer a varied menu with special options not found at many other eating places. It’s being designed for a capacity of 50 people, and will be open all throughout the year with menu choices that change with the seasons.

“One of the things we consistently heard is that when Key Largo closes after the season there isn’t as much of a reason to come out to the lake,” Chuck said. “We want to change that by having a year-round eating and gathering place.”

A jetty (known as the point) leading from the Lake Shetek Lodge beach area out into the bay on the south side of the island will provide another new opportunity.

Since Key Largo events include wedding receptions, families will have the option of using the point as the site of a smaller sized wedding ceremony. It’s gravel surface slopes slightly downward towards the water, which should give everyone a good view of the proceedings.

“The wedding idea has very good potential,” Chuck said. “It ties together with other things within walking distance, both the reception space and the lodging at the lodge and campground.”

Three condominium units on the west end of the lodge have been sold for private ownership. Accommodations still include four three bedroom units with kitchenettes, four two-bedroom units, a honeymoon suite and 10 motel rooms.

Chuck is originally from western Pennsylvania while Robin grew up in Flint, Michigan. They’ve spent much of their adult lives in Florida, where Chuck operated an air conditioning business. He plans to transition out of it in order to make the resort and Lake Shetek a year-round enterprise.

Lance and Tami’s involvement in the business was motivated by their knowledge of the Lake Shetek area. Lance said he and his family have spent substantial amounts of time each year at a home on a location on the north end of the lake often called the sandbar.

“All of us plan to be hands-on owners,” Lance said. “When people visit Valhalla Island, they’ll almost always see at least one of us.”

He said he’s impressed with the amount of support shown by residents of the Shetek area for the plans at Lake Shetek Lodge, that it’s been even greater than he’d hoped.

Randy Martin of Shetek Marine, located on Vahalla Island down the road from the lodge, said keeping the lodge active should help to sustain customer traffic and daily fishing and boating activity.

“I like what I’ve been seeing and what I’ve heard about their plans,” Martin said. “I’m happy that the Shetek area could give them what they wanted in a business. With the updates they’ve been doing, I think they’ll have more of an amenity that will add to the turnout and bring in more repeat customers.”

Kate Chapman, who coordinates education and outreach activities for the Shetek Lutheran Ministries camp on neighboring Keeley Island said the lodge, along with the neighboring campground, can help to attract participants to her environmental learning programs.

Valhalla and Keeley islands are divided by only a bridge, and can be reached on foot by walking approximately a quarter mile.

“It’s great that they want to keep the lodge open and that they’re making improvements to it,” Chapman said. “I think it will lead to good results for the entire lake area.”

Heemeyer is promoted to human resources vice president at North Star Marcy Heemeyer has been promoted to vice ...

Business briefs for May 12

SMSU grad Hellie named president of North Star Mutual in Cottonwood Pete Hellie was elevated to the position of ...

Hill returns to Ralco Ralco announces the return of Dr. Jeff Hill to the company as a brand manager. In his new ...