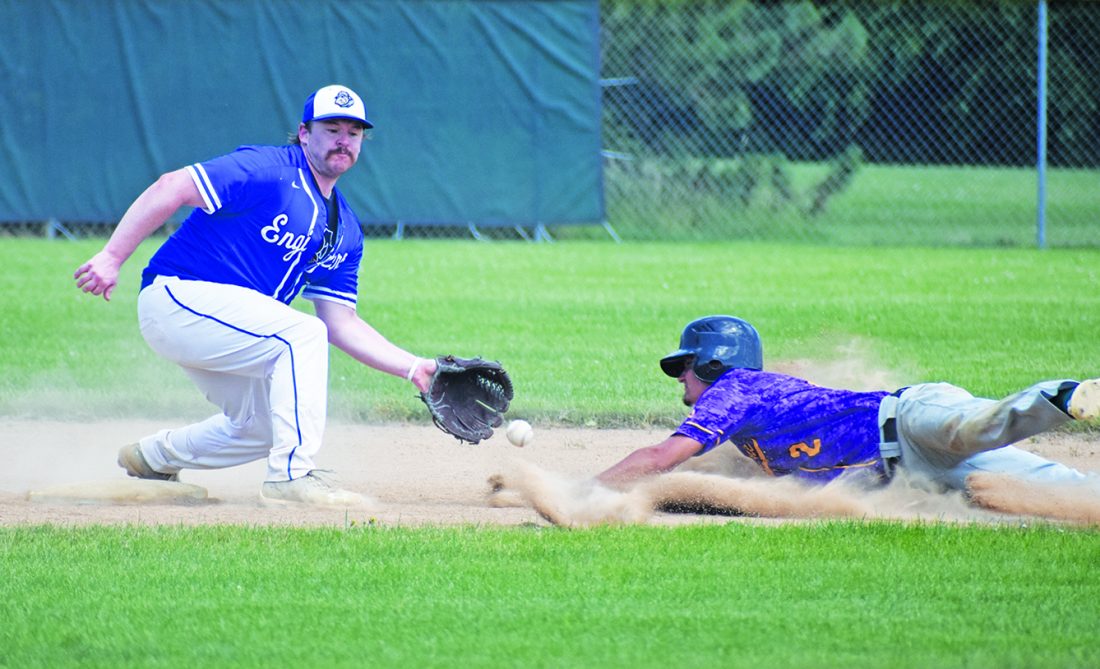 Photo by Sam Thiel Tracy’s Travis Apperson (left) waits for the ball at second base as Pipestone’s Mitchel Carson slides in on a steal attempt during their game on Sunday. The Engineers fell to the A’s 11-8.

TRACY — Each fresh off a shutout victory, the Tracy and Pipestone amateur baseball teams looked to keep the post-holiday sparks flying in a league showdown on Sunday afternoon. They did just that, but the Engineers had a few more obstacles to overcome throughout the game. Not only did Tracy issue 17 walks, it found itself trying to dig out of four separate instances of trailing by at least three runs.

Each time, the Engineers managed a way to get themselves back in the game, but they could never get a share or complete control of the lead all afternoon, as Tracy ultimately fell to Pipestone 11-8.

Tracy’s Dan Scamp said he was pleased with the way his players continued to battle despite some costly mistakes down the stretch that hurt their chances.

“We had a few mental mistakes at the end, otherwise overall we pitched really well, came back really well and played really well,” Scamp said. “It’s a tough one to lose, especially the way we went down at the end.”

Pipestone made the opening statement within the first few batters, as Luke Tinklenberg launched a two-run homer to left to give the A’s a quick 2-0 lead. Pipestone later added a run on an RBI single in the top half of the third to extend its advantage to 3-0.

After not being able to take advantage with its baserunners in its early at-bats, Tracy made it count in the middle frames. Trevor Parlberg led off the fourth with a double before Shane Erickson connected on a single. After Jake Olson was hit by a pitch to load the bases with no outs, Garrett Hogeland reached on a fielder’s choice to bring in the Engineers’ first run of the afternoon. Lucas Gervais followed it up with a fielder’s choice of his own to score another run and draw Tracy to within a run at 3-2.

That was the beginning of a back-and-forth offensive display from either side. After Tracy got a pair of runs, the A’s answered right back with two runs of their own to go back up by three. The Engineers rallied once again, though, with Jake Tauer reaching on an error before a single from James Fultz and a hit batter loaded the bases again with no outs. Parlberg then lined a single just past the Pipestone third baseman to score a pair of runs and bring Tracy to within a run again, this time at 5-4. The Engineers had an opportunity to take their first lead later in the same frame by loading the bases two more times, but couldn’t push the necessary runs across.

Pipestone continued to strike in the next half-inning, though, using a pair of RBI singles and an error to plate three more runs and make it 8-4. The Engineers wouldn’t go down without a fight, however, as Nathan Fultz reached on an error and Tauer drew a walk before Travis Apperson smacked an RBI single to get a run back for Tracy.

After the Engineers held the A’s scoreless in the top of the seventh, Tracy kept things going in the bottom of the frame. Hogeland got the rally started with a one-out single before Nathan Fultz connected on an RBI single. On the ensuing at-bat, Tauer drove a double into the gap to bring in another run, getting Tracy to within one for the third time in the game.

Neither side found scoring in the eighth, leaving things to be decided in the final frame. Pipestone had a strong opportunity to extend its lead in the ninth, loading the bases with one out, before a wild pitch brought in a run. The A’s then got a sacrifice fly to take a three-run lead for the fourth time, before another wild pitch made it 11-7.

Looking for one final rally, the Engineers quickly saw Hogeland and Gervais get hit by pitches to lead things off before an error on a pickoff attempt brought Hogeland around to score and send Gervais to third. After two quick outs and a wild pitch, James Fultz drew a walk to put a pair of runners aboard and bring the tying run to the plate. Unfortunately for Tracy, that would be the closest it got, as a popout to first ended the game.

Scamp said despite the multiple rotations of arms on the mound, he was pleased with how his pitchers and the defense behind them performed.

“It’s a testament to both the pitchers and the defense. The pitchers came right back and got us ground balls and pop flies, so it goes both ways,” Scamp said. “I think overall everybody did well, it’s just a few little mental errors here and there kind of beat us but overall I’m happy with everybody and everything that we did.”

Offensively, the Engineers were led by Parlberg with a pair of hits and two RBI while Tauer had two hits and an RBI and James Fultz and Erickson each collected two hits of their own. Apperson, Hogeland and Nathan Fultz all added a hit apiece, with Apperson and Nathan Fultz combining for two RBI.

Tracy will face Dawson on Wednesday at 7:30 p.m. 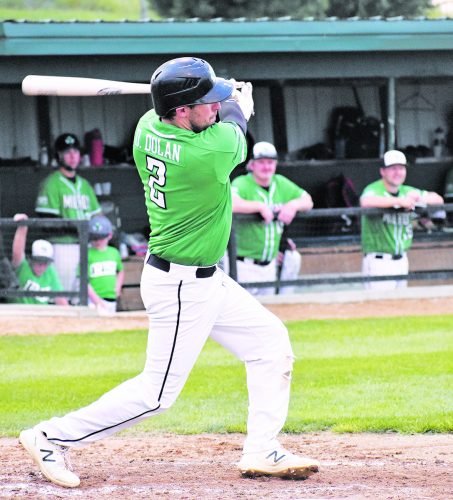 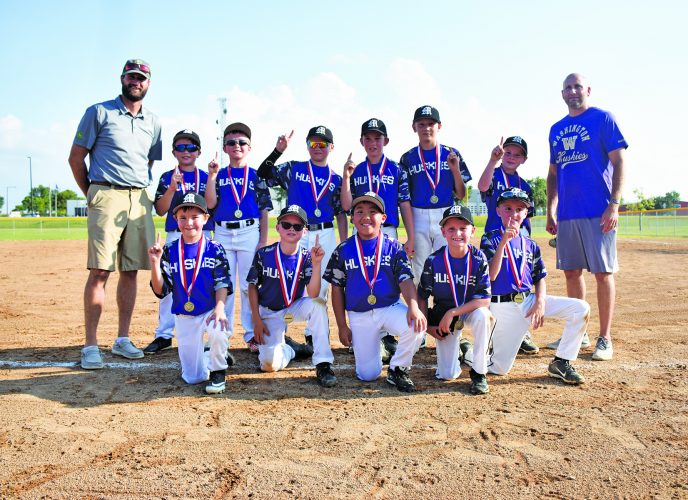