MILROY — The Milroy Irish kept things rolling on Wednesday night with a 10-0 victory over Hadley in seven innings.

Dominic Dolan and Tyler Patterson led the way for the Irish with a 2 for 4 day at the plate with two RBI each.

Beau Priegnitz and Tyler Peterson only allowed two hits on the mound for the Irish while combining for 10 strikeouts.

Trent Carlson took the loss on the mound for the Buttermakers.

MILROY — The Milroy Yankees maintained their winnings ways on Wednesday night with an 8-4 victory over Granite Falls.

Derek Rasmussen led the way for the Yankees with a pair of hits and three RBI while Dylan Criquet-Danielson added two hits of his own and an RBI.

Nathan Deutz earned the victory for Milroy, going five innings while allowing two runs on eight hits and struck out four. Ty Kemp tossed the final four innings, giving up only one hit while striking out six.

Kyle TeBeest led the way for Granite Falls with a 3 for 5 day at the plate with an RBI while Cam Vien added two hits and Markus Kranz had a hit and an RBI.

Adam Brewers took the loss on the mound for the Kilowatts, going six innings while allowing eight runs on seven hits and struck out seven.

The Yankees will face Marshall today at 7:30 p.m. while Granite Falls will face Wabasso on Sunday at 5 p.m. 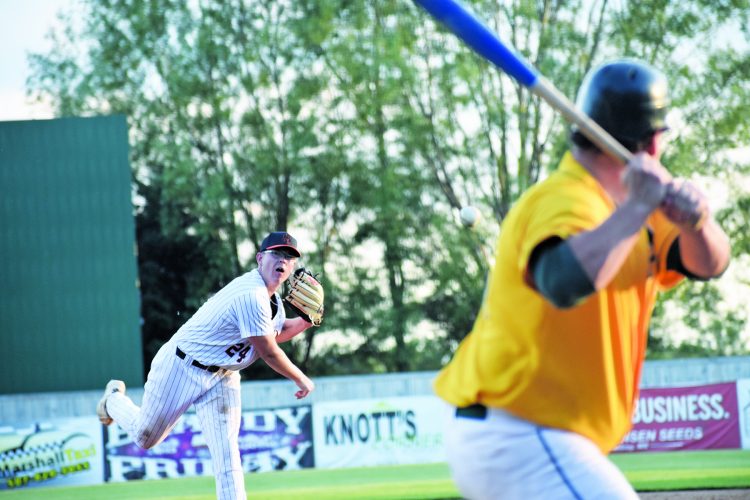