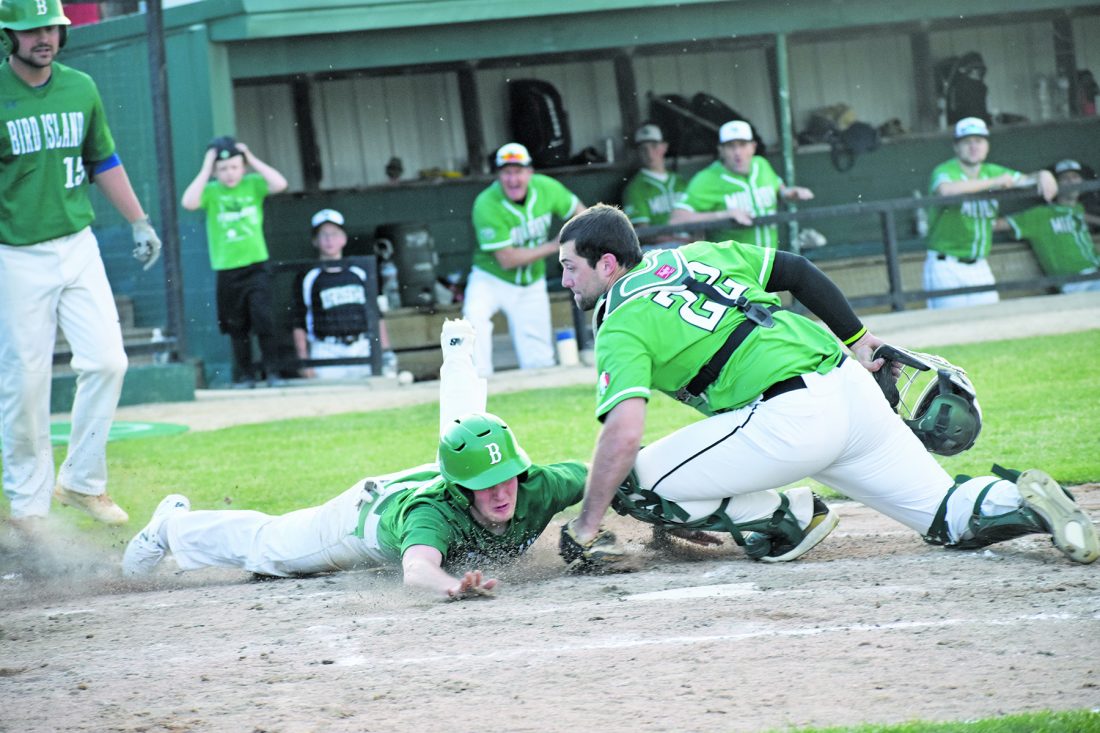 Photo by Sam Thiel Milroy’s Brady Lanoue (22) reaches around to tag a Bird Island baserunner during their “exhibition” game against the Bullfrogs on Friday at Irish Yard. Lanoue would get the out on the play.

MILROY — There’s nothing like playing a game on your home field. It took a few months, but some amateur baseball teams in Minnesota finally got to experience their first home games of the season on Friday night after the Minnesota Baseball Association gave them the go-ahead to play as long as they follow specific guidelines and get their ballpark approved.

The Milroy Irish were one of the first teams to kick off the long-awaited and highly-anticipated start of having games on their own field and with a great atmosphere of fans behind them, the Irish were able to emerge victorious with a 2-1 win in an “exhibition” game against Bird Island at Irish Yard.

Manager Bob Dolan said it felt amazing to play on their home field and was grateful to all of the fans that showed up.

“It’s like heaven,” coach Dolan said. “It really is; thanks to all of the fans that came out, everybody was having fun while staying away and doing some social distancing but we had a lot of families out here enjoying the game on a perfect night.”

After rolling on offense to the tune of 54 total runs in their three games in South Dakota, the Irish quickly found themselves locked in a tight battle that would require strong outings from their pitchers.

Beau Priegnitz took the mound for the Irish, and was in command right from the start, striking out two of the first three batters he faced. The right-hander’s night wasn’t done there, as he tossed four scoreless frames while not allowing a hit in the process.

After having a couple of threats on base early on, the Irish broke open the scoring in the bottom half of the third. Dominic Dolan and Tyler Peterson both drew walks before Brady Lanoue smacked an RBI double to give Milroy a 1-0 lead.

Despite not being able to find a hit against Priegnitz in its first four trips to the plate, Bird Island eventually got a leadoff walk in the top half of the fifth before Milroy responded with two quick outs. After a stolen base, the Bullfrogs capitalized with an RBI double of their own to tie things up at 1-1.

Priegnitz’s night was done after five solid innings, allowing just one run on one hit and only walking two while striking out seven.

Coach Dolan applauded Priegnitz for coming out strong after not throwing that much and added he was able to find the strike zone early.

“His arm felt great he said and he wanted to go maybe one more inning, but I thought he hasn’t thrown much this year. He threw about a week and a half ago and had 9 or 10 strikeouts,” coach Dolan said. “So he went back out in the fifth and gave up that one nice hit down the line, but he threw really well. The key with him is if he throws strikes, he’s really good.”

After a scoreless sixth, Bird Island threatened to take the lead in the top half of the seventh with a single and a Milroy error, but on a double steal attempt, Moses Dolan delivered a strike to the catcher Lanoue, who quickly applied the tag and prevented the go-ahead run and keep things deadlocked at one run apiece.

It wouldn’t be until the bottom of the eighth when offense picked back up again. After Jake Plaetz drew a leadoff walk and advanced to second on a sacrifice bunt by Anthony Dolan, Derek Riley reached on an error, bringing in Plaetz to give Milroy a 2-1 lead. The Irish then sent the Bullfrogs down in order in the ninth to seal the win.

Five Milroy players (Ben Heichel, Riley, Lanoue, Anthony Dolan and Peterson) led the way with a hit each, with Lanoue picking up the lone RBI.

The Irish (4-0) are looking to continue their strong start to the season this weekend. Coach Dolan said they are hoping to face Cottonwood on Sunday in either a scrimmage or a game.