Yankees use hot hitting, solid pitching to take down Marshall 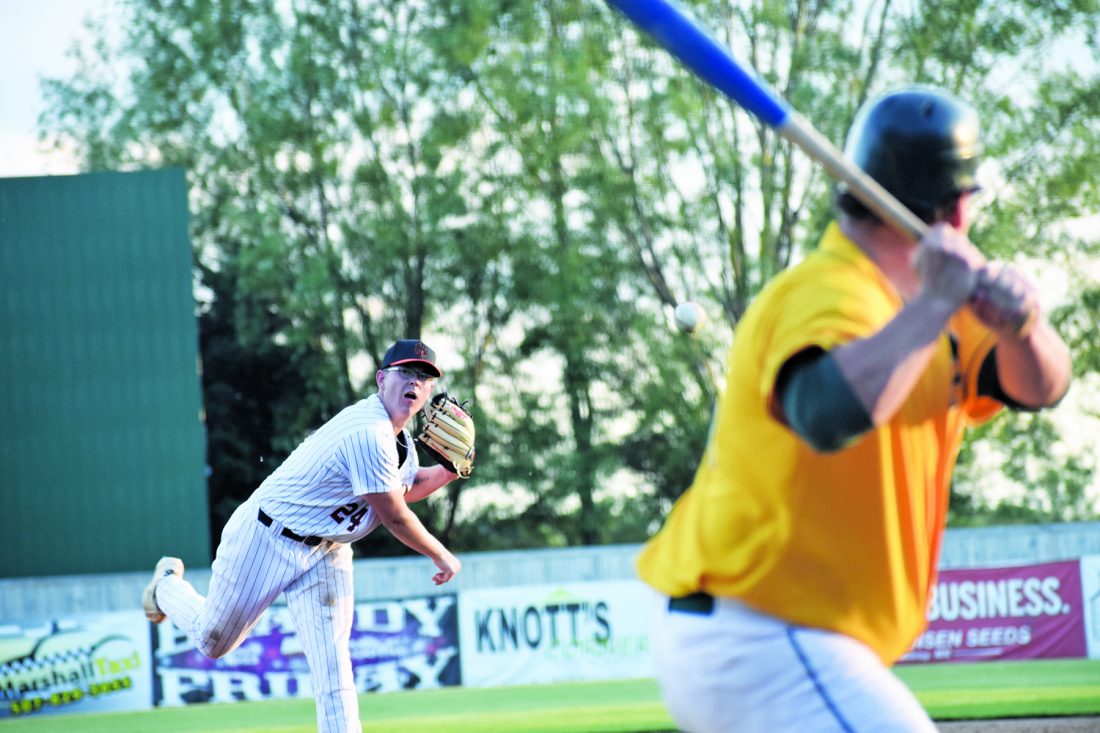 Photo by Sam Thiel Milroy’s Isaac Schmitt delivers a pitch to Marshall’s Justin Greenwood during their game on Wednesday. The Yankees defeated the A’s 11-1 in seven innings.

MILROY — After a pair of tough outings began its week, the Marshall A’s amateur baseball team looked to bounce back against the Milroy Yankees, who hoped to continue its strong start to the season.

It was tight to start, but four consecutive innings with at least a run — highlighted by a walk-off grand slam from Dylan Criquet Danielson — helped the hot-hitting Yankees keep the A’s out of reach as Milroy defeated Marshall 11-1 in seven innings on Friday night.

Yankees manager Ryan Rohlik said despite it being a strange year with everything going on, he’s been pleased with how his team has come together so far and brought a new level of energy to the ballpark that has resulted in seven wins to start the year.

“It’s been obviously a weird year, but the guys have kind of embraced it,” Rohlik said. “It’s brought us closer together, whether in practice or on gamedays, guys are excited to come to the park and you can see they’re relaxed on their approach at the plate and also in the field. It’s been fun so far this year.”

After a scoreless first frame, the Yankees were quick to get things started in the bottom of the second when Brian Dolan reached on an infield single and Eric Dolan made it aboard on an error before Isaac Schmitt connected on an RBI single. One batter later, Aaron Mathiowetz smacked an RBI double to put Milroy up 2-0.

Neither team would find scoring again until the fourth when Mathiowetz connected on a single before advancing to second on an error from a Marshall pickoff attempt. Nathan Deutz would advance the runner with a single before a wild pitch brought in Mathiowetz to make it 3-0. The Yankees continued their strong offensive outing in the next inning, as Cody Greve led things off with a walk before reaching second on a wild pitch. Derek Rasmussen lined a double on the next at-bat to bring in a run before Milroy pushed its lead to 5-0 on a sacrifice fly from Eric Dolan.

Marshall wouldn’t go down without a fight, though, as Matt Hmielewski drove a hard-hitting double to lead off the sixth before Zach Olson brought in the A’s first run of the evening with a double of his own.

The Yankees had an answer, however, in the bottom half of the frame, loading the bases with three hit batters. Rasmussen then brought in Jackson Hughes with a sacrifice fly but A’s reliever Rusty Swanson limited any further damage in the frame with a key strikeout to end the frame.

Milroy kept things going in the next inning, as Eric Dolan led off with a single before Mathiowetz connected on a double and Deutz drew a walk to load the bases with one out. After Hughes brought in a run with an RBI single, Criquet-Danielson ended the game with a walk-off grand slam to bring it to the 11-1 final.

Marshall manager Ryan Schwagel said they just couldn’t piece enough offense together to get back in the game and ran out of gas late.

“You’re not going to win very many ballgames by only getting four hits and having three errors, but we battled there for a while and just ran out of gas,” Schwagel said. “Hopefully our bats start to come around so we can start putting some runs on the board.”

Olson led the way for the A’s with a 2 for 3 day at the plate and an RBI while Schwagel and Hmielewski each added a hit.

Wes Sarsland took the loss on the mound for Marshall, going 5 1/3 innings while allowing five runs on seven hits and striking out four.

Mathiowetz led the way for the Yankees with a 3 for 3 day at the plate with an RBI while Brian Dolan added a pair of hits and Criquet-Danielson, Rasmussen, Eric Dolan, Schmitt, Deutz and Hughes all collected a hit apiece and combined for nine RBI.

Schmitt earned the victory on the mound for the Yankees, going all seven innings while allowing one run on four hits and striking out nine.

Rohlik said Schmitt has continued to grow throughout his career as a pitcher and felt like he did an excellent job of commanding the zone.

“Isaac is really maturing and is maturing fast. I’ve always just been impressed with him from his high school days to now playing with us and trying to take his game to another level,” Rohlik said. “He was confident from the get-go and was a strike machine and that’s what you like to see out of a starting pitcher. I really enjoyed the way he commanded the game and wanted the ball and showed it by attacking the strike zone.”