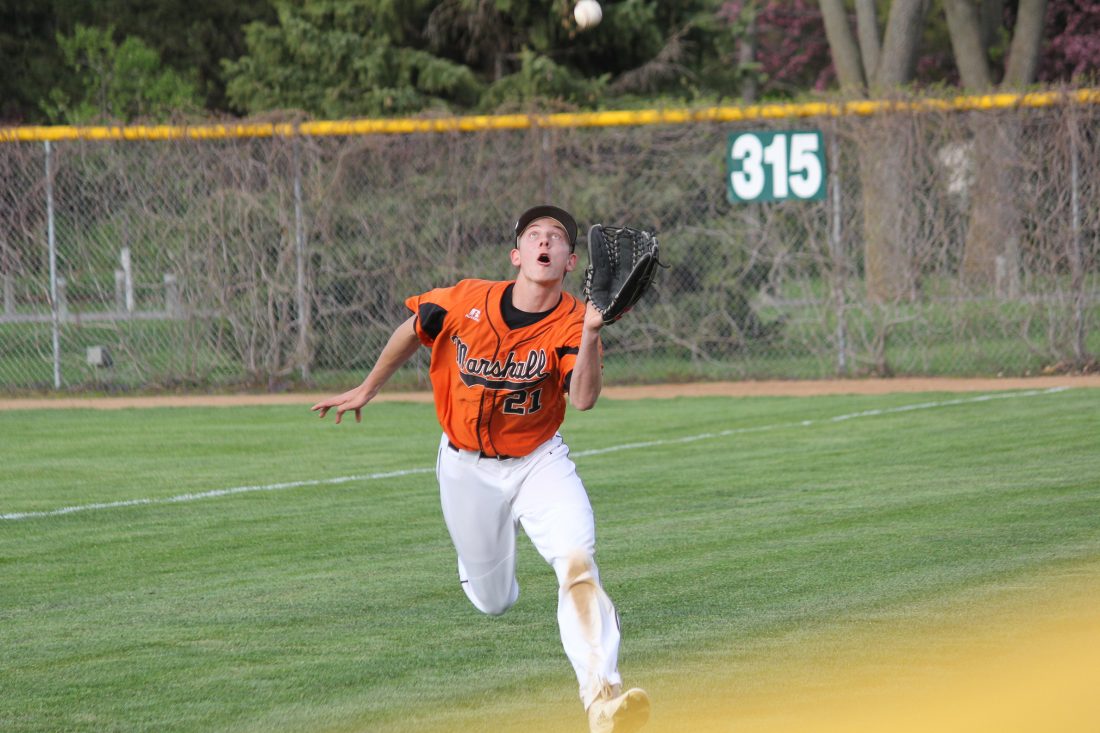 Independent file photo Marshall’s Matt Hmielewski tracks down a fly ball during their Big South Conference championship game against Luverne on May 20, 2019.

MARSHALL — Like thousands of athletes around the world, Matt Hmielewski watched the sports world come to a grinding and devastating halt as the COVID-19 pandemic suddenly took over. One thing it didn’t stop, though, was keeping the Marshall senior from revealing the next stage of his future, as Hmielewski recently announced his commitment of playing baseball at Briar Cliff University.

Although he hasn’t officially signed his National Letter of Intent, Hmielewski said he’s looking forward to the day that he can officially put the pen to the paper and begin the next chapter to his life and playing career.

Hmielewski said what drew him to Briar Cliff was the tight-knit community it had as well as having an ability to make an impact on the team right away.

“It really had a family atmosphere that I loved,” Hmielewski said. “They’re also going through a rebuilding process and I would love to be a part of that process with them and help them be successful.”

The past few years, Hmielewski has been a key contributor for the Tigers’ success on the diamond throughout his time at MHS. He attributed that to the impact his coaches and teammates have had on him.

Hmielewski said his coaches have taught him a lot of things that extend past the field and they’ve helped him continue to drive towards the next level.

“They’ve had a huge impact on me during my four years here,” Hmielewski said. “They’ve been teaching me a lot of life lessons and helping me achieve my dreams. I just want to continue to make them proud of what I become.”

He added that his teammates as well have played a key role both on and off the field and they’re just one big family with each other.

“My teammates have also had a huge impact,” Hmielewski said. “They’re like a family to me, we’re all brothers and have each others back. I will definitely miss playing with them and I’m sure we’ll keep in touch a lot.”

Hmielewski will have a familiar face by his side when he steps foot on campus next fall. Peyton Grant will be joining his Marshall teammate as a member of the Chargers after signing his letter of intent in February.

Hmielewski said it’ll be special to have Grant alongside him for their college journey and is excited to see where it takes them.

“It’ll be great to have him there,” Hmielewski said. “He’s a great player, brother and teammate and I’m excited to get on the field with him and live college life and see where the future takes us.”

While Hmielewski and many other high school and college spring-sport student-athletes weren’t able to play out their season and for seniors, end their careers the way they wanted to, he has been trying to stay positive and sharp both mentally and physically during this unforeseen stretch.

“On the mental side, I’ve just been staying in touch with the other players and coaches,” Hmielewski said. “On the physical side, my brother has been home and we’ve been working out together, going for a run and just going through the grind together.”

His brother, Drew, knows a little about playing sports at the college level. Drew spent his first couple of seasons as a dual-sport athlete at the University of Minnesota, playing football and baseball before turning his focus to solely baseball in 2018.

Matt said he and his brother haven’t talked too much about advice at the college level on the field, but added he loves learning as much as he can from him as well as his father.

“We haven’t gone into much details yet, but he’s been coaching me for a long time and I love learning from him,” Matt said. “And then my dad (Chris), I’ve learned a lot from him as well and it’s been going great.”

Hmielewski added he is currently undecided with his major, but is thinking about potentially something in business or finance. He said he’s looking forward to seeing where his path will take him off the field. On the field, he added he might play in the outfield and is just going to give it his all each day.

“Besides getting out of quarantine, school-wise I’m looking forward to just figuring out my dreams and seeing the paths I want to take,” Hmielewski said. “I’m going to work my hardest and play my best for them.”