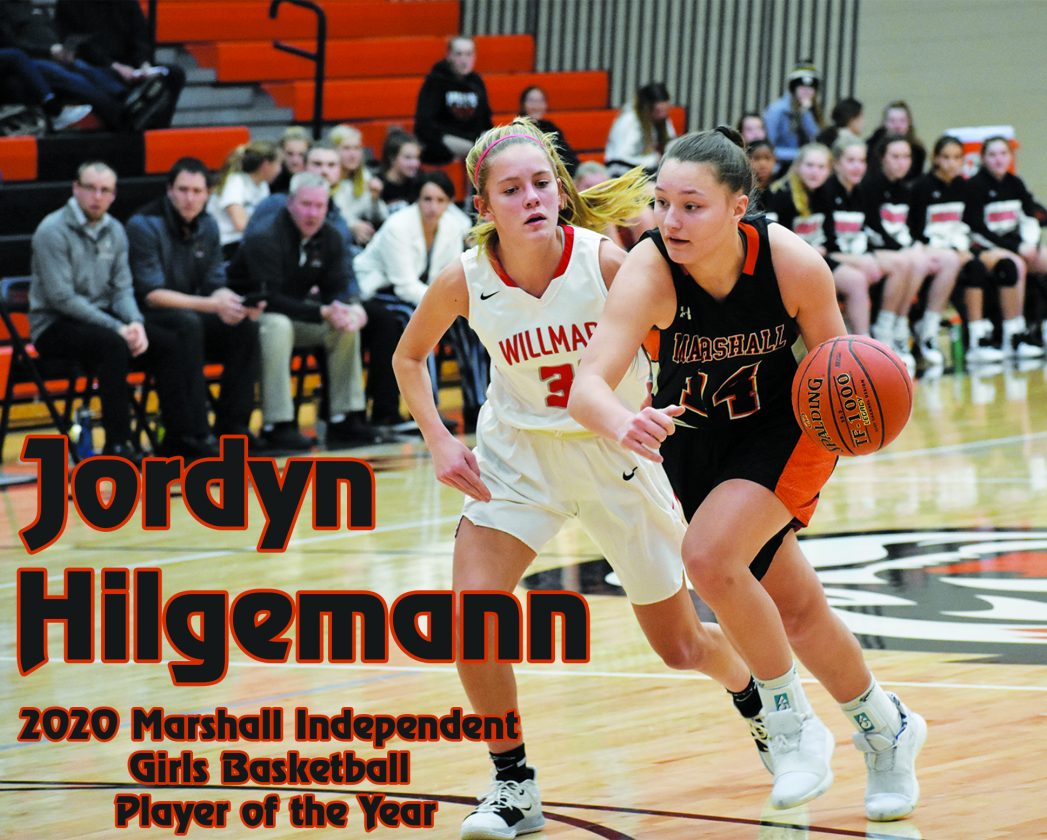 MARSHALL — Marshall’s Jordyn Hilgemann wears a lot of hats when she suits up for the Tiger girls basketball team. She wears one of a scorer, leading the team at 24.4 points per game with her ability to drive to the basket as well as knock down a jump shot. She wears one of a facilitator, dishing out 79 total assists. She wears the one of being a vocal leader, encouraging and educating her teammates on the sidelines. She even wears the miscellaneous one, which sees the junior throw in the ball on an inbounds play or match up against the tallest opposing player for the opening tip at the start of the game.

Through all of those aspects, Hilgemann helped guide Marshall to another stellar record this season, including a perfect 27-0 mark before a tough loss to Waconia in the section championship game.

In addition to scoring and assists, Hilgemann added 80 steals, 126 rebounds while also connecting on nearly 76% of her free throws (147-of-194) on the season. That level of consistency on a nightly basis is a driving force to the Tigers’ success on the court and has earned Hilgemann the 2020 Marshall Independent Girls Basketball Player of the Year award.

Hilgemann was honored when she heard the news.

“It’s a great honor,” Hilgemann said. “Obviously there is a lot of great talent and great athletes in the area, so it’s definitely an honor.”

Although Marshall came up just short of their goal, Hilgemann said what made this season special was the camaraderie they had as a group on and off the floor.

“Obviously it didn’t end the way we wanted it to, but I think the camaraderie we had was amazing,” Hilgemann said. “We were just playing together and working together as a team and that’s what made it special.”

Hilgemann has been a key contributor in leading the Tigers throughout the past few years, serving as the primary scoring option. This season, she led the area in scoring for the second consecutive year, including recording games of 25-plus points 15 times, 30-plus outings seven times and 40-plus games twice.

Hilgemann said being able to draw on past experiences as well gaining more confidence has helped her grow as a player during each season.

“I think having that past experience has helped a lot and I’ve been gaining more confidence with each year,” Hilgemann said. “I’m able to work off of what my teammates bring to the gym and every year being in different types of situations makes a big difference.”

Marshall coach Dan Westby said Hilgemann continues to work on several aspects of her game and has shown a lot of improvements.

Hilgemann said Westby, who also coaches her during the fall in volleyball, has had a tremendous impact on her and he is one of her role models.

“He’s one of my biggest role models,” Westby said. “During the season, I think I spend more time with him than some of my family. He’s more than a coach, he teaches us life lessons and he’s one of the best coaches a player could have.”

She added her teammates are extremely close as well and their bond is bigger than basketball.

“I think the biggest thing is we get so close to each other and our bond extends beyond the game or practices,” Hilgemann said. “We’re like one big family, I love my teammates.”

Fortunately for Marshall, Hilgemann will be suiting up one final season for the Tigers, along with several others in what will be a big senior class. Westby said they relied heavily on their seniors from this past season and expects the juniors to take on that role.

“We have a number of talented juniors coming back who will need to take the next step. The team that beat us in the section championship, Waconia, has a lot of kids coming back and so do other teams,” Westby said. “We just need to continue to improve and get better, but who knows what will happen with COVID-19 down the road. They are a very self-motivated group and we lost a lot of great leaders from this year’s senior class who we relied on heavily, so the juniors will need to assume that role and continue to improve.”

Heading into her senior year, Hilgemann said she’s going soak it all in and they have one goal already in mind going into summer: getting back to that final section game and getting a different result.

“I think definitely just to make the most of it. This past season didn’t end the way we wanted it too, so we want to make it to that last game again and strive to get to state,” she said. “We have a ton a motivation to get to state and have another season like we did this year.”