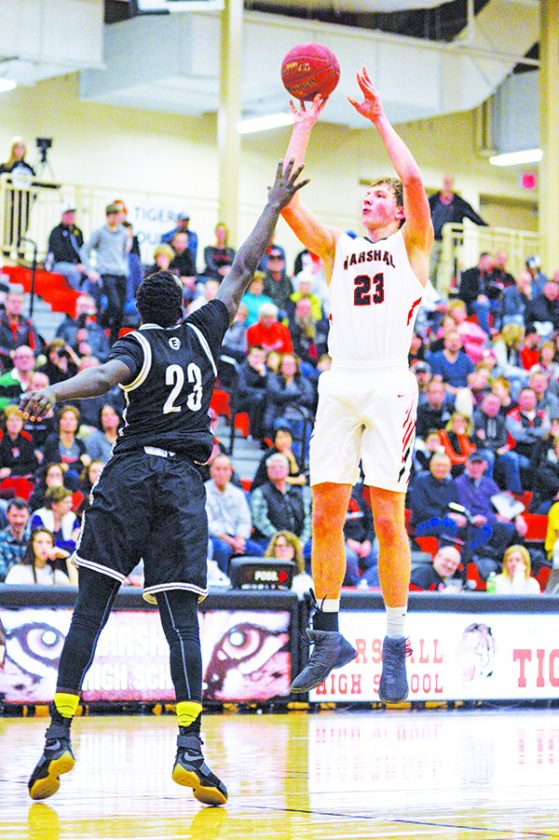 MARSHALL — After starring on the hardwood and in the classroom at the South Dakota School of Mines and Technology for three years, 2017 Marshall graduate Mitchell Sueker is set to embark on the next chapter of his basketball and academic career in Grand Forks, North Dakota next fall.

Last Thursday Sueker announced via Twitter that he will grad-transfer to the University of North Dakota where he will join the Division I Fighting Hawks men’s basketball team for the 2020-2021 season, while also working towards obtaining his master’s degree in Biomedical Engineering.

Sueker, who is set to graduate with a bachelor’s degree in electrical engineering later this spring, said he’s thankful for his experience in Rapid City, South Dakota with the Hardrockers.

“I had a great time at my previous school. I loved all of the players there and the coaches were great. All of the professors were awesome,” said Sueker.

In the hopes of one day playing professional basketball overseas, the decision to transfer was aided by the higher level of competition at UND in addition to the school’s offering of his master’s degree of choice.

“One of my goals is to try and play professional basketball overseas,” said Sueker. “I really just wanted to push myself and see if I could play against higher competition and so after I knew this season that I would be graduating, I opened back into my recruitment and I had some good opportunities. I knew that UND has the master’s degree that I want, and they have a good basketball program and some great coaches.”

At the helm for the Fighting Hawks is head coach Paul Sather, who Sueker had the chance to meet during his initial recruitment period in high school. Sather, along with former Southwest Minnesota State University men’s basketball assistant coach turned UND Director of Basketball Operations Nate Kaeding, provided Sueker with an extra layer of comfort in his decision given his familiarity with the two coaches.

“When I was really young (Kaeding) ran Mustang (basketball) camps that I would attend, so I knew some of the coaches previously and I know they’re great guys so I’m excited to be coached by them,” said Sueker. “It definitely eased my mind. With all of the stuff going on you can’t really take visits right now so just already knowing them as people and knowing what they’re about helped me to make that decision.”

Sueker, a 6-foot-9 junior, has two seasons of eligibility left in his collegiate basketball career and will look to build off an especially dominant sophomore campaign in 2019-2020 that landed him on the All-Rocky Mountain Athletic Conference Second Team. Sueker finished second overall on the team in points per game last season with 14.3, while averaging a team-high 5.4 rebounds.

The versatile skill-set possessed by Sueker isn’t limited to his on-court ability, however, as his strength in communicating with teammates has made him a leader at every step of his career as well.

“I think I can shoot it pretty well. I’m also long and I feel like I communicate well with my teammates. I feel like I can also just bring positive leadership too,” said Sueker. “I just stay calm and I usually have a good relationship with all of my teammates, so hopefully I can get there and we’ll all have great chemistry.”

While Sueker eagerly awaits the next step in his career, he has remained hard at work on his simulated court to prepare for next season.

“I measured out all of the lines with measuring tape and painted out all of the lines in my driveway, so I go out there pretty much daily and my dad will rebound for me. I’ll get a lot of shots up and get some workouts in that way,” said Sueker. “Then I also go for runs, and we have a hill nearby that I’ll do some hill-runs and then (I’ll do) push-ups and sit-ups. I just kind of do the little lifting that I can with not much equipment.”

The vast amount of work put in is something that Sueker embraces in his quest to grow as a player and meet the challenges of the elevated competition level.

“I think really just to kind of push myself and to grow as a player is the thing that I’m most excited about,” said Sueker. “(Also) just to play against the higher competition and see if they can expose what flaws I have in my game and then kind of learn from that and become a better overall player from it.”