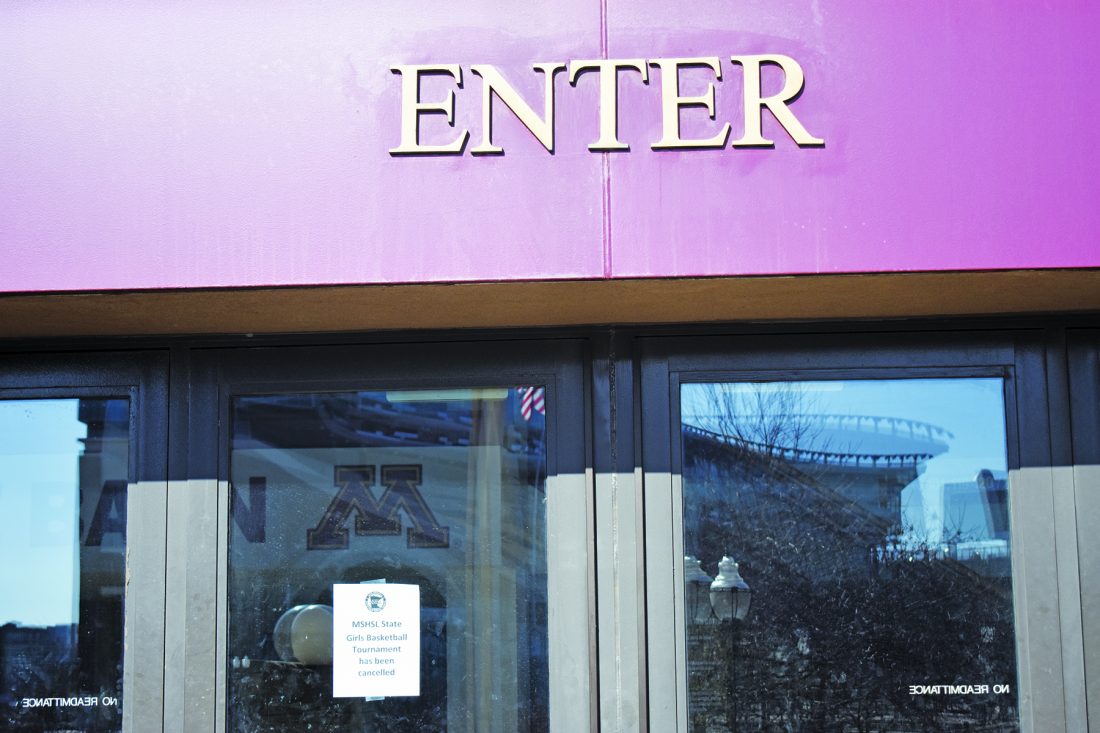 Photo by Sam Thiel Signs were posted on the doors at Williams Arena at the University of Minnesota on Friday morning saying that the Minnesota state girls basketball tournament was canceled. The semifinal and championship games, along with the remainder of the boys section and upcoming state tournaments were canceled as a precaution to the COVID-19 threat.

MINNEAPOLIS – Just as quickly as it began, it was over.

The Minnesota State High School League continued its precautions towards the rapidly-growing COVID-19 pandemic on Friday with the cancellation of the rest of the winter sports season, just less than a day after an initial announcement that implemented limited attendance for the state girls basketball and boys section tournaments.

Roughly an hour before tip-off of the Class A girls semifinal game between Minneota and Waterville-Elysian-Morristown Friday morning, it was announced that the rest of the tournament was canceled.

The top-seeded Vikings were entering the second day of play after defeating Red Lake in the quarterfinals on Thursday. Minneota coach Chad Johnston said the team was just finishing up its pregame talks when they found out the news.

“We were in the locker room and had just finished our meeting with our host from state who was telling us all of the finer details of where to go, where to lineup, etc. I was talking with the team and then one of our assistant coaches came in and pulled me aside and one of the representatives from state said they had just got contacted and were told to shut down the tournament,” Johnston said. “I went and told the girls and they thought I was joking. I told them that I wasn’t and some of them didn’t know how to react; Morgan Hennen took it hard right away and then some of the other players looked at her and saw the gravity of the situation.”

Minneota will graduate just one senior in Morgan Hennen. Johnston said he and his veteran leader had a quick conversation about the life lessons that sports provides.

“We talked about how sports provide life lessons; it stinks that she’s not able to show everyone what she can do and that it was her last chance, but nobody else is guaranteed anything either. For us it just affected a game, but for a lot of others it’s affecting their jobs, families and livelihood,” Johnston said. “It just hit her a little bit harder because she was really determined and wanted to shine here at state.”

He continued that Morgan has played a vital role on their team and she’ll be sorely missed next year.

“Morgan has been a great player for us and I’ve been very fortunate to have great players in the past. She’s had a big impact as an undersized power forward and just plays bigger than she is,” Johnston said. “She’s done a great job of accepting that and being that type of player and I think the younger players have fed off of her energy and what she brings and she’ll be greatly missed.”

The Vikings end their season with a record of 31-1. Reflecting on the season, Johnston said they had a lot of questions entering the year about who would fill the shoes of the senior class before them that had helped deliver a state championship and felt his players did a nice job of adapting to their roles, some of them as first-time players.

“It was a great season. We had to replace a lot of great senior players from last year, but we had the two Hennen girls back [Abby and Morgan] and we had a lot of role players step up this year,” Johnston said. “On our roster this year, we had one senior, two juniors and the rest were sophomores or below; some of them, such as Ireland Stassen and Kennedi Jurrens, weren’t even in uniform for us last year and they came in and did a great job for us.”

With the boys section and state tournament games being called off, Marshall’s season is also suddenly over, just less than a day after the No. 2 Tigers defeated No. 1 Mankato East in the Section 2AAA championship game to book their ticket after a three-year absence.

Marshall coach Travis Carroll said they were aware going into the section championship game that there was going to be some changes to their tournament but was disappointed they weren’t going to be able to wrap up their year at state.

“On Thursday we knew that they were going to be making adjustments to the tournament and understood there was a possibility of having the state tournament canceled,” Carroll said. “I feel bad for the kids but this is out of our control and there are going to be situations in life where that happens.”

“I found out online about 15 minutes before lunch so we gathered the team together before lunch, but since they’re pretty tech-savvy they already knew what was going on,” Carroll said about how they found out.

Marshall graduates six seniors, including Trey Steinbach, Dean Pochardt, Noah Puetz, Matt Hmielewski, Konnor Aufenthie and Yahya Black. Carroll said he felt they handled the thought of not getting to finish their careers at the state tournament well and that it was a testament to the leadership and camaraderie they displayed all season long.

“They had a good perspective on not having the tournament because they knew it was a possibility and I thought they handled it well, just like how they handled the whole season well,” Carroll said. “They did an amazing job of working together and were committed to the team and were rewarded to end their season and careers with a section championship.”

The Tigers end their season with a 28-2 record. Looking back on the season, Carroll said they did a good job of maintaining a high level of consistency throughout the year and came in focused and ready to go each night.

“I thought we played with a consistent effort both in our practices and in our games. We only had two losses on the season, so our kids were ready to go every night and we didn’t have many letdowns this season. They worked really well together and came into the section tournament focused; with Worthington we kind of had a slow start and a tough night offensively, but then were able to play extremely well the last two games against St. Peter and Mankato East. Our younger players saw the leadership from our seniors each day and it will be important to build on that, just like how our seniors now did when they learned from the seniors when we made the state tournament three years ago. I also want to take some time to thank the community for the support they provided our kids with this year. We had great crowds and positive support throughout the entire season.”

Among the other decisions that were made was the delay of spring sports competitions until April 6. Teams can still hold practices and tryouts, but aren’t allowed to practice, play or scrimmage against other member schools.