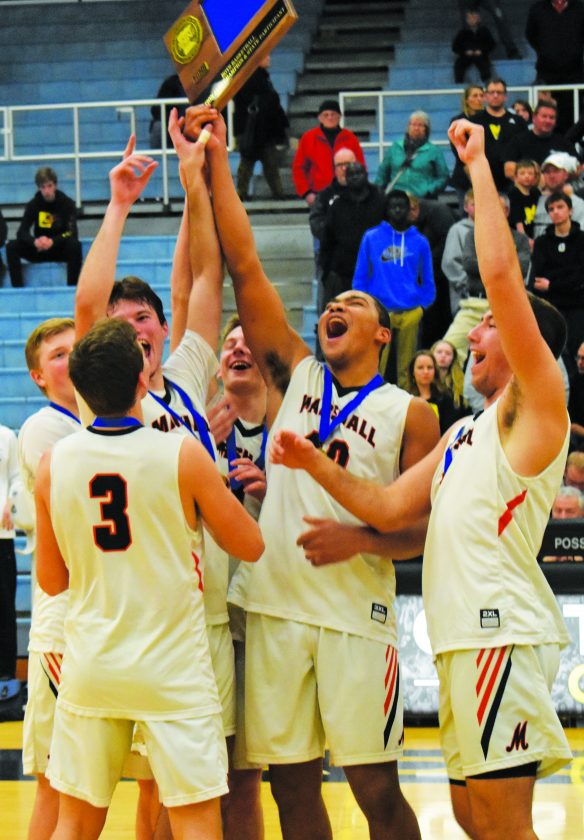 Photo by Sam Thiel Members of the Marshall boys basketball team celebrate as they raise their Section 2AAA trophy after defeating Mankato East 65-58 on Thursday at Gustavus Adolphus College.

ST. PETER – Ever since he was a freshman and got to witness his team go to the state tournament, Noah Puetz has always wanted to have another experience.

His teammates agreed and, after a heart-wrenching thriller that saw monumental runs, hard-nosed plays and emotional rallies, the second-seeded Tigers fought back from a late deficit to earn a 65-58 victory against top-seeded Mankato East on Thursday night in the Section 2AAA championship and punch Marshall’s ticket back to the state tournament.

The win not only helped Marshall avenge one of its two losses during the regular season (Jan. 11 at Mankato East), but also snap the Cougars’ 25-game win streak in the process.

Puetz said when the clock hit zero and the buzzer sounded, he was happy to see that all of their hard work as a team had paid off.

“It’s amazing,” Puetz said. “Ever since freshman year when I got to go with our seniors and juniors, that was a great experience and I knew I wanted to go back. We did everything we could this year to put ourselves in the position and we happened to do it this time.”

This is the 12th time the Tigers will appear in the state tournament and the fourth in the eight years that coach Travis Carroll has been at the helm. Carroll said he’s extremely proud of the way his team continued to fight and not give up, especially down the stretch of the game.

“We are very proud of our kids. We were playing a very tough opponent in Mankato East, they are one of the best teams in the state of Minnesota regardless of what happened here. They have an amazing team, are very well coached and are a very difficult matchup,” Carroll said. “We were able to get out to a very good start in the first half and get a nice lead, but unfortunately we gave up a three at the end of the half and felt like the momentum was going towards Mankato East. They came out and played well to start the second half, we were kind of with them for a bit in that second half and then they went on that run and we got down eight. Our kids could have just given up in that situation and said, ‘This wasn’t our night’, but I’m just very proud of our kids to have two great possessions on offense, two great possessions on defense, and an eight-point game turned into a two-point game and just like that, we were able to kind of turn the tide.”

Going back and forth

The Tigers found their backs against the wall early on, as Mankato East built a 9-3 lead in the opening minutes. But then Marshall completely took over the pace of the game, as a layup from Yahya Black cut the deficit to two before back-to-back 3-pointers from Puetz and Bryce Lance gave the Tigers the lead again at 13-10.

Marshall’s huge run was just beginning, however, as a barrage of layups from four different Tigers (Trey Steinbach, Black, Josh Baker and Lance) quickly pushed their advantage to as many as 11 at 21-10 and capped off a seismic 18-1 run.

Puetz said their key during that stretch was their ability to be unselfish with the basketball and get out in the open court and play as a team.

“We were just playing together,” Puetz said. “When we attack and find open guys, there are not a lot of teams in the state that can stop us.”

With Marshall’s side of the gym growing louder in decibel level, the Cougars needed a burst if they were going to get their momentum back. Mankato East would cut its deficit to single digits on a number of occasions, but Marshall was right there with a quick response to keep its lead from diminishing any further. The two teams would trade points for the remainder of the half before a 3-pointer by the Cougars in the closing seconds made it an eight-point game at 34-26 in favor of the Tigers.

Hoping to use its late basket as a spark, Mankato East opened the second half on a 5-0 run to make it a three-point game. Back and forth the two teams went, with neither side allowing a lead greater than a few points. Maintaining their momentum, the Cougars cut the deficit to one before a pair of free throws gave Mankato East the lead a 42-41 with 8:45 to go.

The Cougars weren’t done there, connecting on a 3-pointer before taking an eight-point lead with under five minutes to play.

In need of a spark of their own, the Tigers found it with a 3-pointer from Lance before Baker later drilled a timely triple to tie things up at 51 apiece with 3:15 left. Marshall’s spirited rally continued over the next few possessions, as a string of layups from Matt Hmielewski and Puetz pushed the Tigers’ advantage to six. With under a minute left, Lance would get fouled and calmly knock down four free throws on back-to-back trips to the line, helping seal the comeback victory and a spot in the state tournament.

Carroll was pleased with how his players handled the final minutes of the game and not make a careless mistake when the momentum and emotion was swinging back in their direction.

“I thought our kids handled the end of the game really well,” Carroll said. “We got up two, had a situation where you probably don’t want to pull the basketball out in that situation, our kids attacked the rim and we got two really good looks at the basket and were able to get up six, so that definitely was a big factor for us going forward because it gave us confidence that we could win the game.”

Marshall had four players in double figures in scoring, led by Lance’s 15 while Puetz added 13, Hmielewski had 12 and Baker had 10. Puetz led in rebounds with nine while Hmielewski led in assists with three. As a team, Marshall shot 50% (25 of 50) from the field, including hitting four 3-pointers and making 11 of its 18 free throws.

Defensively, the Tigers held the Cougars to a shooting percentage of 42% (21 of 50) and forced seven turnovers.

Marshall (28-2) will find out its state opponent this weekend. Going into the state tournament, Carroll said their biggest takeaway is being able to maintain a high level of focus as they prepare to face more of the state’s best.

“Going into the state tournament, we understand that we can play with some of the best teams in the state because Mankato East was one of those teams,” Carroll said. “Now it’s how do we lock in and refocus and not have this be our ultimate moment where we can go next week and build something off of what happened this week and get something even bigger than what we got this week. We’re going to enjoy this, but then we need to refocus going into next week.”