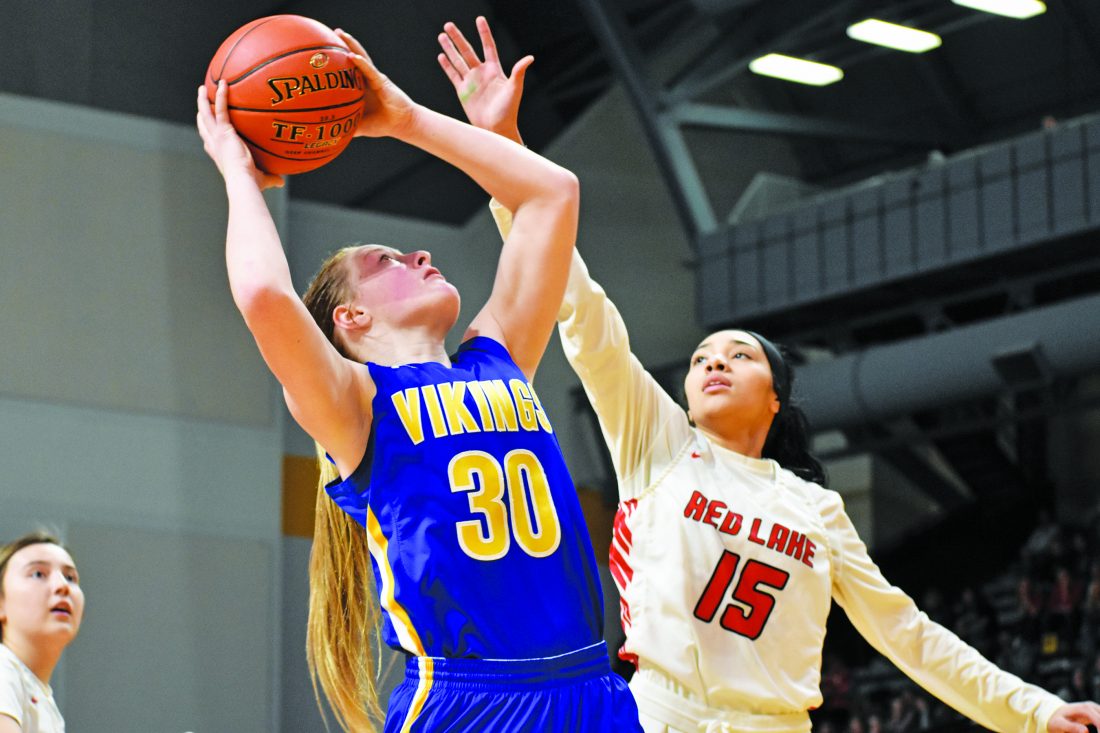 Photo by Sam Thiel Minneota's Ireland Stassen puts up a shot during their Class A quarterfinal game against Red Lake on Thursday at Maturi Pavilion at the University of Minnesota. The Vikings defeated the Warriors 57-37.

MINNEAPOLIS — The Minneota girls basketball team opened its quest towards another state championship Thursday with a familiar foe standing in its way. After falling to Minneota by 20 points in their state opener last season, the Warriors looked to reverse that outcome in the second meeting.

The top-seeded Vikings had other ideas, though, and used a strong start paired with dominant defensive play to take down the unseeded Warriors again by a 20-point margin (57-37) in the Class A quarterfinals at Maturi Pavilion at the University of Minnesota.

Minneota guard Abby Hennen said they did a good job of handling the constant pressure that Red Lake provides, especially early on to establish the tone.

“At the beginning of the game, we knew that they were going to put a lot of pressure on us and I think our team did a really good job of handling that,” she said. “The starters helped set the tone and broke that pressure to start, and then the subs came in and filled their roles perfectly. I also thought we had a nice team effort of having everyone bringing the ball up the court.”

The Vikings jumped right out of the gates to begin the game, scoring the first seven points before Red Lake ended a 3 1/2 minute scoring drought with a layup. Minneota’s defense showed its strength early, and held the Warriors in check for several minutes despite not utilizing its press.

Minneota coach Chad Johnston said they wanted to force some of Red Lake’s players into offensive scenarios they weren’t accustomed to and felt they were able to execute at a high level on defense.

“We kind of went into the game personnel-wise going away from the normal defensive principles, we felt like there were a couple of players that we really needed to force them to use their left hand because if they got going on their right hand, it was really kind of hard to stop them,” Johnston said. “We wanted to make sure [Kelanna] McClain didn’t get going with dribble penetration and I felt Morgan Hennen did a great job with that. We wanted to make sure that Gerika Kingbird and Autumn Holthusen didn’t get hot from the outside and we just had to step up and Abby [Hennen] and Natalee [Rolbiecki] were the ones that got called on that as well as the girls coming off the bench. A lot of it was just knowing what they were good at and trying to take that away and I think the girls did a wonderful job of doing that.”

Red Lake was able to draw to within six at 13-7 with 7:40 left in the first half, but Minneota quickly answered with an 8-0 run before a 3-pointer from Abby Hennen gave the Vikings a 24-10 advantage a few minutes later. The two teams traded points the rest of the half, but Minneota’s strong push midway through the frame helped create enough separation for the Vikings to take a 30-14 halftime lead.

Looking to continue its late-half momentum, Minneota instead saw the Warriors go toe-to-toe with the Vikings to begin the second frame and cutting their deficit to 12 at 37-25. But once again, the Vikings responded with a key burst, as a 3-pointer from Abby Hennen pushed their lead to 42-27. Minneota would continue to lead by at least 13 throughout the next several minutes before an Ireland Stassen layup gave the Vikings a 50-35 lead. From there, Minneota ran the clock down and ultimately earned the 57-37 victory.

Abby Hennen led the way for the Vikings with 23 points while Rolbiecki added 10 and Stassen had eight. Abby Hennen also led in rebounds with 14 while her, Abby Rost and McKenna Yost led in assists with three each. As a team, Minneota shot 37.3% from the field (22 of 59), including hitting four 3-pointers and making 9 of its 12 free throws.

Defensively, the Vikings held the Warriors to just a shooting percentage of 22.2% (14 of 63), including a dismal 1 of 18 from the 3-point line while also forcing 14 turnovers.

Minneota (31-1) will face No. 4 Waterville-Elysian-Morristown today in the Class A semifinals at noon at Williams Arena.