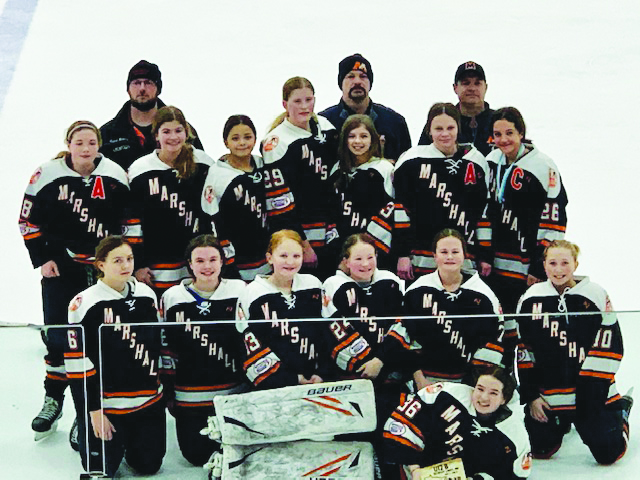 MARSHALL — The Marshall 12U girls hockey team put Marshall on the map this past weekend as it took second place in the Detroit Lakes Polarfest Tournament out of 12 northern and city teams.

The Tigers started out Friday night taking on Armstrong/Cooper, defeating them 8-0. Starting the team off scoring was Piper Mellenthin (3) with an assist from Oliva Lupkes. Teammates following were Olivia DeGroot, Aubree Metheny (3) and Mady Girard. Helping out with assists were Abi Guggisberg, Emma Kolander, Mady Girard and Olivia DeGroot.

This then led the girls into the Wild Card bracket where they took on Proctor/Hermantown early Sunday morning, defeating them 6-0. Scoring were Aubree Metheny (3), Piper Mellenthin, Mia Wichmann and Kendal Beernaert. Assists came from Mady Girard (2), Kyra Skogrand, Emma Kolander and Mia Wichmann.

This led the girls into the Championship game, once again taking on Woodbury White. Coming out scoring for the Tigers were Piper Mellenthin from Olivia DeGroot and Mady Girard from Olivia Lupkes. Unfortunately, wasn’t enough to stay ahead and Marshall fell 4-2.

Belle Deutz was in net the entire weekend, recording a total of 102 saves in five games.

Marshall will now gear up for districts this weekend which are being held in Worthington. The Tigers are ranked No. 1 for their district, so they will play the winner of Thursday night’s game on Friday at 7:30 p.m.