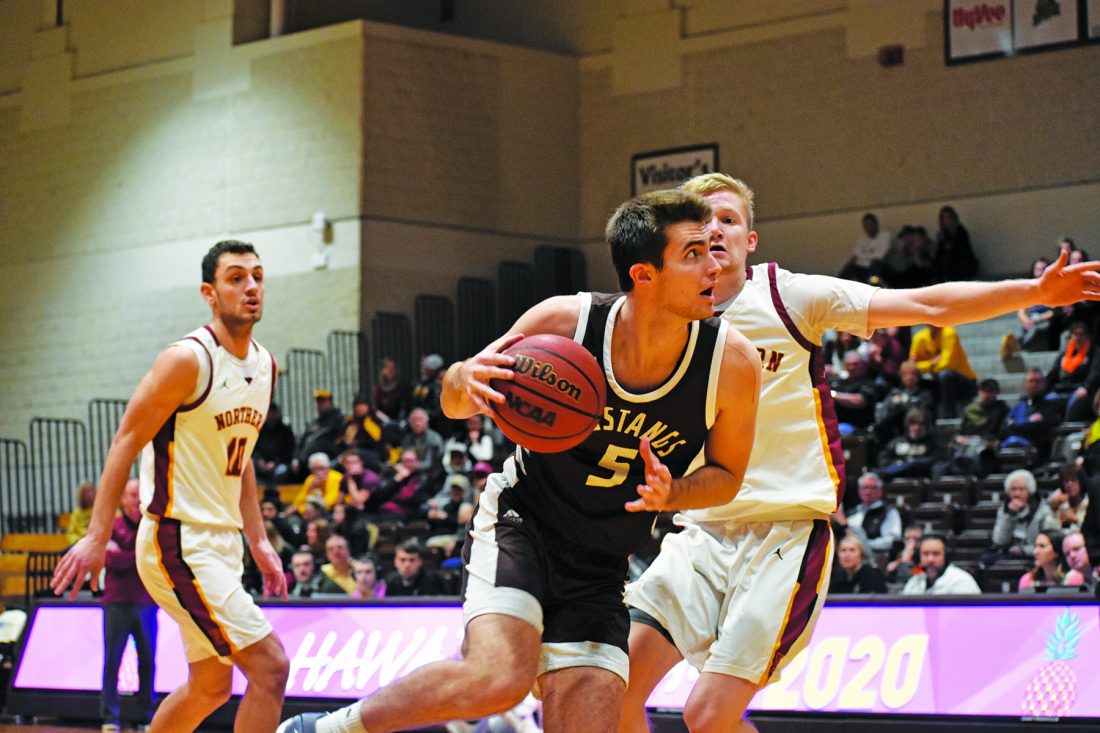 Independent file photo SMSU’s Grant Kramer looks to score during their game against Northern State University on Saturday. The Mustangs will face Upper Iowa and Winona State this weekend.

MARSHALL — The Southwest Minnesota State University men’s basketball team (7-17, 4-14 NSIC) will look to snap a three-game losing streak when it heads to the road for one final time during the regular season with a pair of games versus NSIC South Division opponents.

•SMSU begins the weekend in eighth place in the NSIC South standings, while UIU is second and WSU is in third place in the division standings.

•SMSU lost to both Upper Iowa and Winona State three weeks ago in Marshall.

•The Mustangs will close the regular season at home on Feb. 21-22, before playing on the road for the first round of the NSIC/Sanford Health Tournament on Feb. 26.

•SMSU finished 3-5 versus NSIC North Division teams this season and are now a combined 40-24 versus North teams in conference play since divisions were introduced prior to the 2012-13 season.

•SMSU opponents have made the same or made more 3-point field goals than SMSU in nine straight games. The last time SMSU made more 3-pointers than their opponent came on Jan. 10 versus Concordia-St. Paul.

•SMSU led MSU Moorhead 49-47 with just over nine minutes left in the game, but MSUM rallied to close the game on a 20-3 run. The Mustangs committed 16 turnovers–its second highest total of the season–in the game.

•Grant Kramer scored led the Mustangs with 11 points on 4 of 4 shooting with three 3-pointers in the loss to MSUM.

•SMSU attempted a season-low 45 field goals and made a season-low two free throws in the loss to MSU Moorhead last Friday.

•SMSU made a season-high 19 free throws versus Northern State on Saturday.

•Junior Nick Dufault, who missed two games in early January with an injury, has connected on a team-high 52 3-pointers and is second on the squad in scoring (12.7). He ranks fifth in team history in 3-point field goal pct. (41.9) and 12th in program history with 145 3-point field goals made. He needs 17 more 3-pointers to move into ninth all-time.

•Freshman Cliff McCray ranks third on the team in scoring (8.5) and second with 42 assists.

•Junior Weston Baker Magrath has a team-high 46 blocked shots ranking fifth in team single-season history. The record is 55 set by Mark Ornatek in 1979-80.

•UIU won earlier this season on Jan. 25 in Marshall with a come-from-behind 80-77 victory.

•UIU’s win on Jan. 25 snapped a five-game SMSU winning streak in the series. Prior to the streak, UIU had won six of the previous seven games.

•WSU hold a 41-11 advantage in games played in Winona, winning the past two meetings, including last season, 85-67.

•Junior forward Jareese Williams is averaging 13.8 ppg and leads the team with 75 3-pointers.

•Head coach Brooks McKowen is in his seventh season at UIU with a record of 110-91. He led the Peacocks to the 2017 NCAA Tournament.

•Junior guard Kevion Taylor is scoring 20.0 ppg and leads the team in rebounding (7.6), while connecting on a team-high 89 3-pointers.

•Head coach Todd Eisner is in his fifth season with a record of 74-66. He recorded 417 career victories as a head coach at Midland (Neb.), Benedictine (Kan.), Bellevue (Neb.) and Viterbo (Wis.).