SECTION 3A WRESTLING: Minneota advances with dual victory over Wabasso/RRC 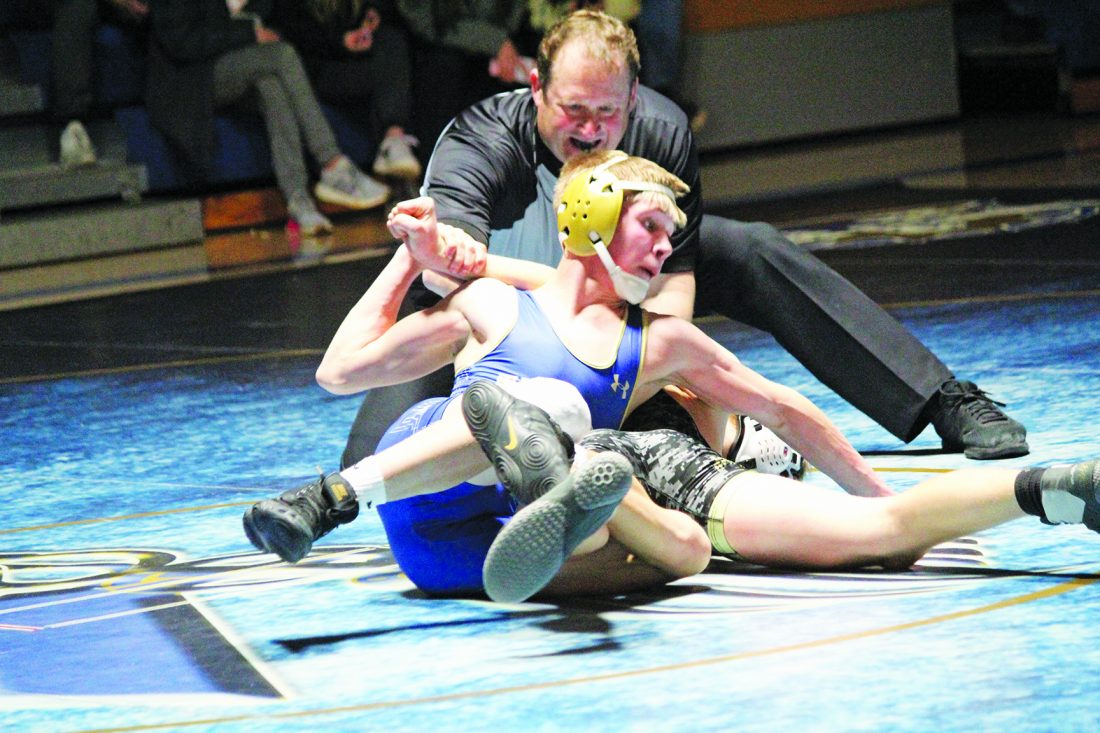 MINNEOTA – For a second consecutive year, the sixth-seeded Wabasso/Red Rock Central wrestling team had its season come to an end at the hands of No. 3 seed Minneota in the quarterfinals of the Section 3A tournament.

Bobcats coach Brett Bartholomaus was pleased with the team’s effort in edging Murray County Central/Fulda to begin the slate of postseason matches, but acknowleged that their youth showed at times in the loss to Minneota.

“I thought our effort was good. We’re a little young and inexperienced and I think that shows at times,” said Bartholomaus. “We dug ourselves a hole and our upper weight guys are more experienced and (were) able to fight back. Minneota’s a tough team and it’s not enough against them. But I like our guys, I like where we’re at and I like our fight so I’m very proud.”

The Bobcats were firing on all cylinders in the first match of the evening as the team captured a 12-0 lead over the Warriors through its first two bouts. Adryen Tietz was the first to record a win for W/RRC with a pin of Torrin Clarke (1:12) before Zackary Zimmerman at 113 followed suit with a victory via fall (0:40).

The Warriors’ lone wins of the match came at the 120 and 126-weight classes as Aiden Lorenzen pinned Aubrey Mathiowetz (1:16) and Carson Klein edged Carter Beranek in an 11-4 decision to cut the deficit to three at 12-9. The final 10 matches all went the way of the Bobcats with six of the wins coming by way of pin-fall.

Only weeks removed from their match in Dawson that saw the Vikings come out on top in a 45-25 final, Minneota wasted little time building towards a similar result on Thursday by winning its first eight bouts over the Bobcats to take a commanding 41-0 lead.

According to coach Matt Myrvik, the team’s dominance in the lower weight classes was essential to their success.

“I think just getting off to a fast start (was key),” said Myrvik. “We wrestled them earlier in the year and we got off to a fast start against them last time. They have very solid upper weights so we really wanted to attack them in the first eight weight classes and I thought our kids did an outstanding job of getting bonus points and going after them.”

Troy Vankeulen opened the eight-win streak with a pin-fall victory over Tietz (1:40) at 106 before Peyton Gillund at 113 and Eric Carrasco at 120 combined to add 10 additional points with a 12-3 major decision win and a forfeit. Kade Lozinski also won his bout in a forfeit at 138.

Zack Fier recorded the only tech-fall of the night in a win over Chase Irlbeck at 132, while Jonah Gruenes and Blake Reiss both edged their opponents with major decision wins at 145 and 152.

The Bobcats got on the board at 160 when Determan pinned Connor Sik (1:14) at 160. After Cole Sanow recorded a 7-2 decision win over Vander Mathiowetz, W/RRC took the next three bouts as Damian Osland won in a 10-4 decision over Hudson Scholten, while Lance Wagner at 195 and Derek Werner at 220 both won via fall. The Vikings took the final bout of the match at 285 as Jayden Gamrak narrowly defeated Cory Anderson at 285 in a 6-4 decision.

With the victory, the Vikings will take on No. 2 seed Tracy-Milroy-Balaton/Westbrook-Walnut Grove on Saturday in Lamberton at 7:15 p.m.

Pleased with the way his team has performed as of late, Myrvik said they need to continue to make an effort to go after bonus points if they want to be successful.

“We just need to keep going after things–going after bonus points, staying off our back and we’ve been doing a better job as the year’s gone,” said Myrvik. “Obviously we’ll be the underdog probably on Saturday a little bit but our kids have been wrestling really well and we expect a lot from them and we expect they’re going to show up and give it everything they’ve got.”