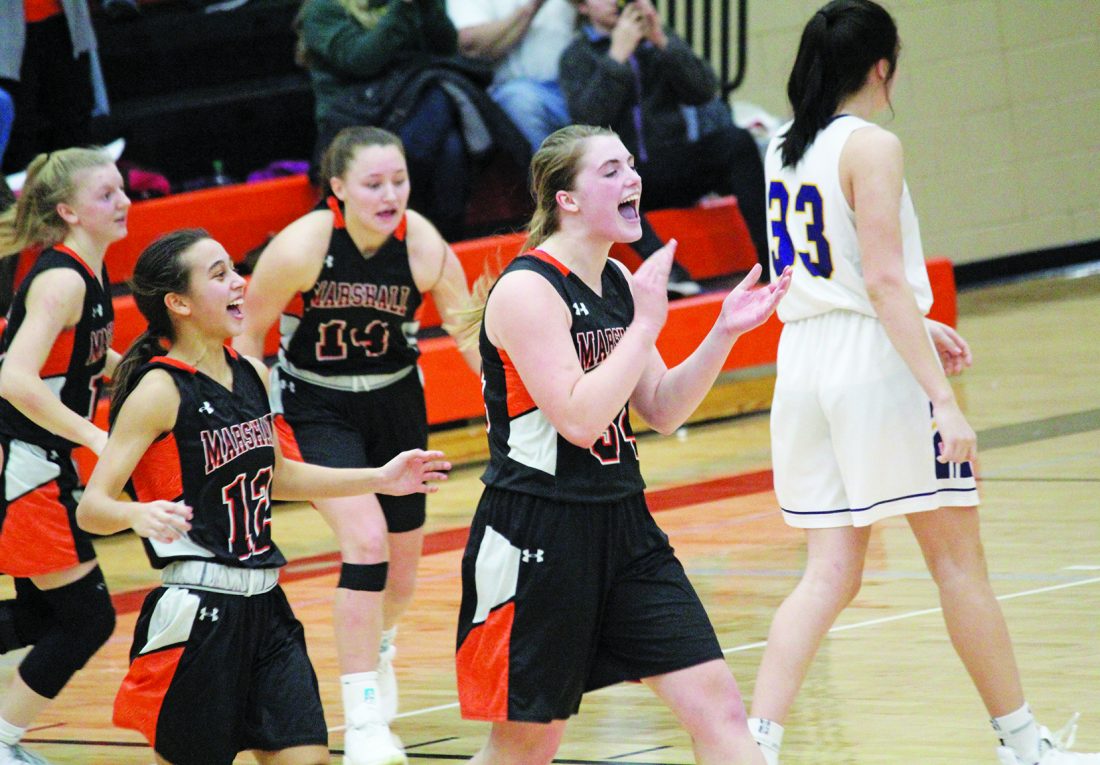 MARSHALL –With heart, determination and a great deal of composure, the No. 4 ranked Marshall girls basketball team battled back from a seven-point deficit in the waning minutes of regulation time to defeat fellow Section 2AAA frontrunner Waconia in a 79-75 nailbiter on Saturday at home.

Marshall coach Dan Westby could not have been prouder of his team for the effort they put forth to come away with a win.

“I was just so pleased with how hard we battled at the end there,” said Westby. “We were down seven with two and a half minutes to go and our kids just ratcheted up the pressure and forced a few turnovers and turned them into baskets and made free throws. We went from being down seven to winning by four, that’s a pretty good effort in the last two and a half minutes.”

Westby went on to tip his cap to the Wildcats for their strong performance.

“They’re just such a quick-strike team,” said Westby “They can score points in a hurry and I thought Waconia did a nice job of getting through our pressure and finding people under the basket and those kids were able to put the ball in the basket as well. That’s a good team.

The Wildcats provided an early glimpse of the tough test they would provide the Tigers by climbing ahead 9-3 on the scoreboard early in the first half as a result of multiple second-chance baskets. Waconia went on to nab 16 rebounds in the first half–eight of which on the offensive end of the floor. Westby said it’s an area in need of improvement from his team moving forward.

“I thought Waconia hit way too many second-chance shots in the first half. I think they had 16 rebounds at the half and eight of them were offensive and that’s just something that we have to work at,” said Westby. “It just feels like we’re letting ourselves get pushed under the basket and we just can’t do that. We’ve got to get people away and secure those balls and we just have to do a better job of that.”

The Tigers–led by a combined 19 points from Jordyn Hilgemann and Abby Wendorff–quickly closed the gap and propelled Marshall back into the lead shortly after at 22-19 following a 19-10 scoring run. The team would be forced to go without its leading scorer in Hilgemann for the remainder of the half, however, as she joined fellow starters Lenei Estrada and Emily Meier on the bench due to foul trouble.

In need of a boost with its top-scorer unavailable, Corrin Naughton stepped up for Marshall by pouring in eight points down the stretch along with timely baskets from Paige Andries and Megan Wegner that extended the Tigers’ lead to 16 at 40-24. The Wildcats managed to cut the deficit back to five at halftime, but Westby came away thrilled by the push made by his team in the absence of Estrada, Hilgemann and Meier.

“I thought they responded great, that group of kids we had out there actually increased the lead,” said Westby. “They had it up to 12 at one point in the first half. But yeah, we played without Jordyn, Lenei and Emily for a big stretch in the first half. I thought those kids came in and gave us some valuable minutes. It certainly would’ve been nice to go into the half with that 12-point lead, but to hang on and have a five-point lead at half I think that was really important.”

Back on the floor to start the second half, Hilgemann and Meier made their presence felt early on by combining to score all seven of the team’s points to keep the Tigers in lock-step with the surging Wildcats at 47-42. The Tigers went on to pull ahead by as many as eight points at 50-42 early in the final frame, but Waconia never let up and took its first lead of the half at 64-61 with just over seven minutes remaining in the contest.

The Tigers remained trailing by five with a minute and a half left to play at 75-70 but did not let the mounting pressure divert them from their laser-like focus of finding a way to win. Drawing on their big-game experience, Marshall remained composed and kept battling and was rewarded with a golden opportunity to make it a one-possession game when Estrada secured a rebound and fed Meier inside who was fouled and went to the line to shoot a pair of free throws where she knocked them both down. The team’s experience of playing on the big stage and knowing how to close out games loomed large according to Westby.

“I think certainly it helps and the kids that we had at the free throw line I think have been through it a number of times and so I mean they should be more comfortable,” said Westby. “They’ve been in that situation before.”

On their next trip down the floor, the Wildcats made it a two-possession game once more at 76-72 after making one of their two free-throw attempts. Needing to regroup, Marshall called a timeout with 47 seconds left to play. Out of the break, the Tigers inbounded the ball and worked it to Meier down-low where she went up for a shot and was fouled. At the free-throw line, Meier knocked down both shots in cold-blooded fashion to make it a one-point game again at 75-74.

Feeling the avalanche of momentum moving to the opposite end of the court, the Wildcats made a costly mistake in the face of the stymying pressure from the Tigers press and turned the ball over–giving Marshall a chance to take the lead with 35 seconds left. With more late-game heroics by Meier in the form of a clutch three-point play, the Tigers did just that and brought the crowd into a frenzy with the score now favoring Marshall at 77-75.

Unable to force overtime with a basket on the other end, the Wildcats fouled Hilgemann who knocked down both of her free throws to lift Marshall to an improbable 79-75 win.

Marshall (22-0) will be back in action on Tuesday when the team hosts JCC in a Big South Conference showdown at 7:15 p.m.