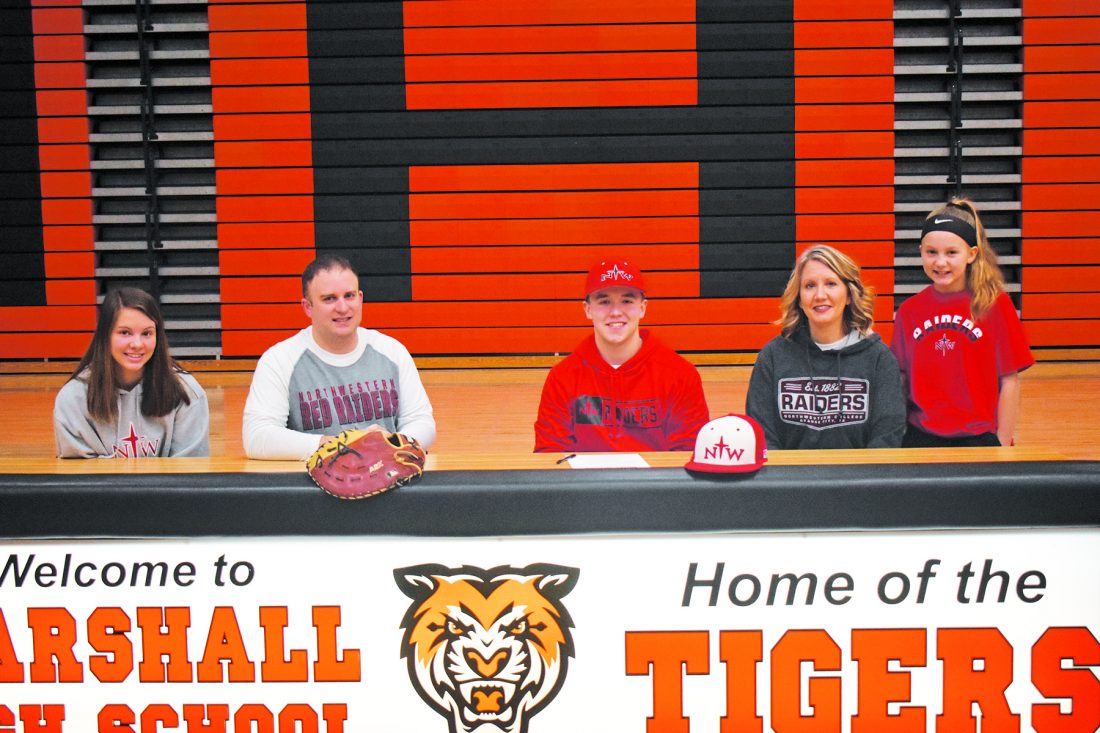 Photo by Sam Thiel Marshall’s Jordan Mernaugh poses for a photo with his family after signing his National Letter of Intent on Monday to play baseball at Northwestern College.

MARSHALL — Even though there is roughly a foot of snow on the ground, that wasn’t going to stop Jordan Mernaugh from thinking about the next few springs. The Marshall senior inked his National Letter of Intent on Monday morning to play baseball at Northwestern College in Orange City, Iowa, surrounded by his family, teammates, coaches and friends.

Mernaugh said he was relieved to have this day come and is excited for his next chapter.

“It’s awesome, I’ve been waiting for this for a long time and finally getting to sign the papers is a really cool experience,” Mernaugh said.

Mernaugh said he’s always known that he’s wanted to continue playing baseball and felt Northwestern’s campus and program had everything on his list. He added he plans to major in exercise science with hopes of becoming a physical therapist.

“I’ve always known I wanted to play baseball in college ever since I was little, there was really never no question. It checked all of the boxes; a place where I can grow as a baseball player and in my faith and it has my major too,” Mernaugh said. “The facilities were awesome, so it literally checked every box and there was no question after I visited.”

Mernaugh said his coaches have had a big impact on him and they’ve helped guide him both on and off the field.

“I’ve been blessed with coach Pollock, coach Maxwell, coach Weiss, coach Schnaible and then all of my youth coaches, coach Hmielewski and coach Winkelman, they’ve all impacted me in some way,” Mernaugh said. “I’ve been really blessed to grow up here and get the coaching that I have and without them I definitely wouldn’t be able to play in college.”

Mernaugh added his teammates have supported him every step of the way and it’s great that they’ve grown up together playing the game they love.

“They’ve just supported me the whole way. We’ve been playing with each other since we were little so it’s just cool that we get one more year together,” Mernaugh said. “We’ve all been working together for a common goal and it’s cool that I get to play in college too, but I’m still focused on high school and finishing this right off too.”

Before he anchors the first base spot next season, Mernaugh still has one final season with the Tiger baseball team. He said he’s looking forward to having another opportunity to see what they can do as a team and hopes they can make another deep postseason run.

“Just having one more season with the guys because some of my favorite memories are playing with them,” Mernaugh said. “Hopefully we can get back to the state tournament and not end it like we did last year and end it at Target Field with a win.”