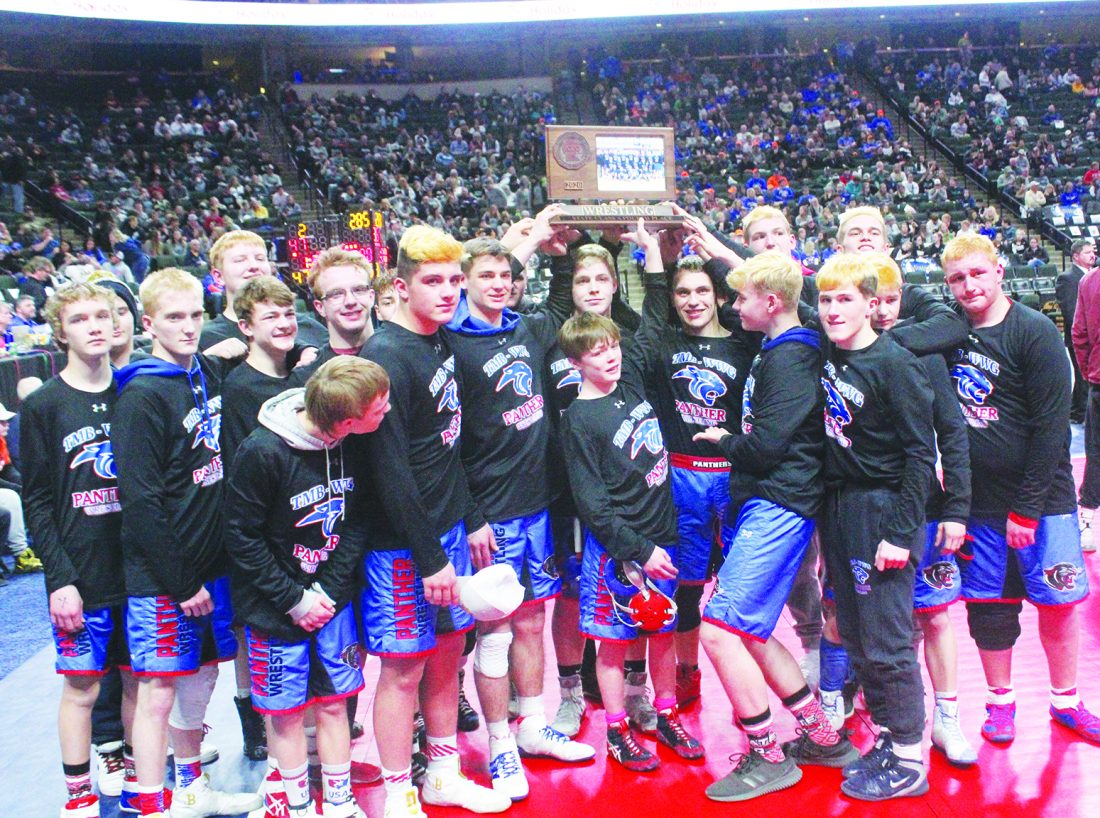 Photo by Jake Przytarski Members of the Tracy-Milroy-Balaton/Westbrook-Walnut Grove wrestling team raise their trophy after placing fourth in the Class A tournament on Thursday at Xcel Energy Center. The third-seeded Panthers defeated Royalton/Upsala 59-18 before falling to No. 2 ACGC 40-25 and Blue Earth Area 36-26.

ST. PAUL — Making the trip north for the Class A state tournament in St. Paul for a third straight year, the Tracy-Milroy-Balaton/Westbrook-Walnut Grove wrestling team found itself in familiar territory Thursday evening after splitting its first two matches of the day — mirroring its previous two state tournament journeys that ended with a third-place finish.

Unfortunately, this time around, the Panthers came up just short in their final match of the season, as Blue Earth Area narrowly escaped with a 36-26 win to take third place.

TMB/WWG coach Karl Campbell acknowledged that it was tough not being able to end the season with a win but feels privileged that the team was able to accomplish the elusive feat the past two years.

Campbell, who had his own doubts about whether his team would be able to make it back to state this season, lauded the senior class for playing a large role in their return trip.

“All six of them played a major role in getting us back to this spot,” said Campbell. “One of my assistants said to me — we were sitting in the corner winding it down and we were at heavyweight and we knew we had lost the dual (against Blue Earth Area) — he said, ‘Did you think a year ago we were going to be sitting in this chair again here?’ And honestly, a straight answer at that point it would’ve been probably not. We knew we had the potential, but there were just a lot of unanswered questions and this group has been fantastic to overcome a lot adversity. These guys have won over 90 duals in the last three years. 90 duals, that’s phenomenal for a three-year run so I’m very proud of these guys.”

Trevor Eisfeld, Jace Paplow and Ayden Horner were also named to the Class A All-Tournament team.

Taking 11 of the 14 bouts in their opening round matchup against the Royals, the Panthers got off to an especially strong start in their first match of the day.

At 106, Devon Carter delivered the first victory for the Panthers with an 11-7 decision win over Michael Zimmerman before Alexander Schuh brought the TMB/WWG contingent of fans to their feet with the team’s first pin at 2:43 to make it 9-0.

After the top-ranked Horner recorded the team’s third straight win at 120 with a 5-0 decision over 10th-ranked Will Gorecki, Levi Ellingson and Jayden Torgeson notched back to back pins at the 126 and 132 weight classes to give the Panthers a commanding 24-0 lead. The Royals would respond at 138 with their first of three wins, all by fall, to get on the board with their first six points.

The Panthers went on a tear down the stretch by earning bonus points in their next six bouts as Blaine Petersen at 145, Caden Johnson at 152, No. 5 ranked Sawyer Schwartz at 160, No. 3 ranked Paplow at 170 and Gabe Krick at 182 all pinned their opponents while top-ranked Eisfeld bested his opponent in No. 10 Matthew Kasella with a tech-fall (16-1) victory to make it 59-6. The Royals went on to earn their final two wins at the 220 and 285 weight classes with a pair of pins.

In a rematch of their meeting early on in the season that ended in a score of 33-24 in favor of ACGC, the Falcons got the better of the Panthers again, this time to secure a spot in the Class A championship.

ACGC’s Jevon Williams, ranked No. 9 in the 106-weight class, opened up the match with a 11-4 decision win over Linkoln Carlson before No. 6 ranked Cole Helien at 113 earned a 17-4 major decision win over Alexander Schuh to give the Falcons a 7-0 lead.

The Panthers recorded their first win of the match when Horner battled his way to a 4-3 ultimate tie-breaker victory over No. 2 Kelvin Andrade-Ponce in a wild bout at 120. The point scored to win the bout came on a third caution warning to Ponce, which resulted in one point being awarded to Horner for the win.

The momentum for TMB/WWG generated by Horner was short-lived, however, as ACGC quickly climbed back into the driver’s seat with four-straight wins at 126, 132, 138 and 145 — three coming by way of pin-fall.

Trailing big on the scoreboard at 28-3, TMB/WWG managed to gain some ground in the next five weight-classes as Caden Johnson notched a 3-0 decision win over Jake Mortensen and Schwartz followed suit with an 8-4 decision win of his own at 160 over No. 7 ranked Jaxon Behm.

After Paplow earned an 11-3 major decision win over Jesus Cardenas, the Panthers picked up two crucial pins by Krick and Eisfeld at the 195 and 220 weight-classes to make it 28-25. The three-point deficit would be the closest the Panthers would come to evening the score, however, as pin-fall victories for the Falcons at the 220 and 285-weight classes sealed their victory.

Ranked No. 5 and No. 6 in the state, the matchup between the Panthers and Buccaneers had all the makings of a nail-biter and lived up to the billing with the outcome being decided in the final two weight classes.

The match got off to a strong start for the Panthers at the 106-weight class as Devin Carter earned a forfeit victory after Blue Earth Area’s wrestler sustained a concussion in his previous bout and was unable to compete in his bout.

The Buccaneers responded with their first of four pin-fall victories as Ty Peterson defeated Alexander Schuh at the 5:29 mark before Horner gave the Panthers the lead once more with a pin of Carson Sturtz (0:41) to make it 12-6 in favor of TMB/WWG through 120. After splitting the next two weight classes with Levi Ellingson earning a 4-1 decision win over Jacob Beeler at 132 and the Buccaneers adding another pin, Blue Earth Area recorded four straight victories that included another pin and three narrow decisions. The highlight of the four bouts was an 8-6 decision win for No. 3 ranked Max Ehrich over Schwartz.

Campbell said their inability to come out on top in the close bouts was the deciding factor in the outcome.

“Well the first (meeting), a month ago, we won all of the close ones. We really did. We won a lot of close matches,” said Campbell. “As we went through this thing, you hear me talk all the time that we can’t give up bonus points and in a nutshell that’s pins. But you know, in a lot of duals you’re going to give up a couple two-three (pins) or whatever it is. You couple that with the fact that we lost I don’t know how many that went right down to the wire where it’s a one-point thing we needed to take down or needed a reversal whatever it was. It wasn’t that we weren’t battling, we just didn’t get it done. Our kids battled their tails off in both the ACGC match and Blue Earth match, but we just didn’t find a way to win those tight ones and that’s the difference in matches like this.”

Much like the team’s previous two matches, Krick, Paplow and Eisfeld provided a large boost for the Panthers as the three recorded pivotal wins that brought the team to within one point of tying the match at 27. Krick and Paplow defeated their opponents in 5-3 and 10-4 decisions before Eisfeld recorded a tech-fall win over Luke Mertens (22-7).

Trailing by one with only two bouts remaining, the Panthers could not afford a loss via fall but were unable to avoid it as Nick Lawerence pinned Eathan Martinez to clinch Blue Earth’s victory. With the match already decided, the Buccaneers added three additional points with a 4-2 decision win at the 285 weight-class.