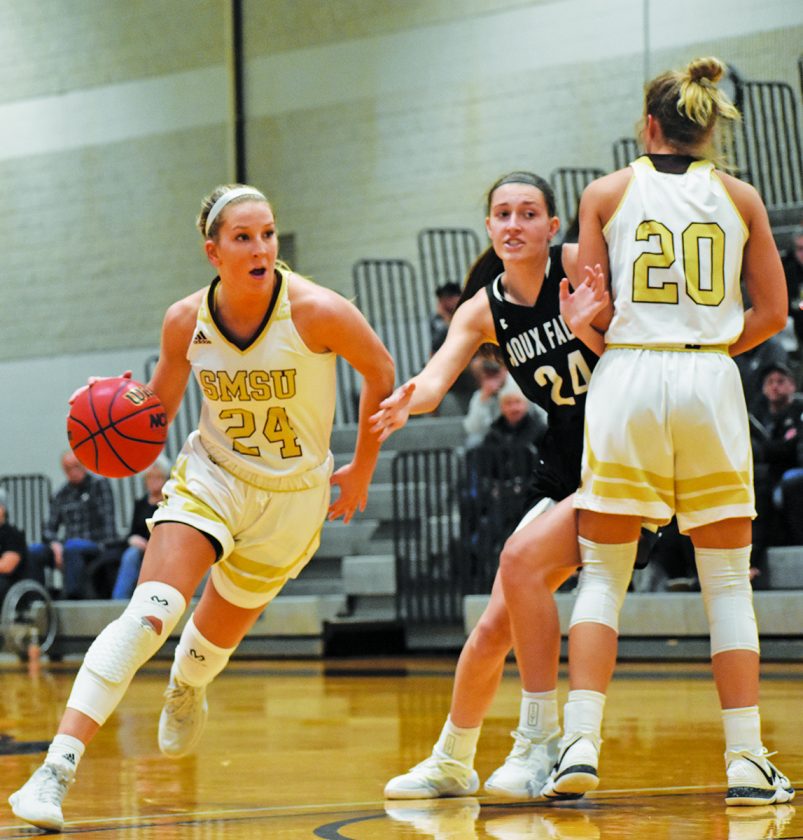 Independent file photo SMSU’s Erin Baxter drives around a screen during their game against the University of Sioux Falls on Dec. 21. The Mustangs will face Concordia-St. Paul and MSU Mankato this weekend.

•SMSU snapped a five-game skid with a 60-55 victory over Augustana on Friday night. SMSU went 1-1 on the weekend after a 79-62 loss to Wayne State last Saturday to close weekend play.

•SMSU dropped both match-ups earlier this season versus this weekend’s opponents with a 76-60 loss to Minnesota State and a 82-79 loss in overtime to Concordia-St. Paul.

•Friday’s game will be broadcast on 105.1 FM KARL, while Saturday’s will be on 94.7 FM KKCK with Ryan Rohlik providing play-by-play.

•SMSU is in its 51st of women’s collegiate basketball and has amassed 600 all-time victories, reaching this accolade with the victory over Augustana on Jan. 3.

•SMSU broke a five-game losing streak with a victory over Augustana to open the new year.

•True freshman Madison Gehloff had a breakaway performance in the victory over Augie with her first career 20-point game. Gehloff led the team in both scoring and rebounding with 20 points and a team-high seven rebounds.

•Junior guard Meleah Reinhart is leading the Mustangs in scoring with 15.6 ppg and is 70 of 81 from the free throw line.

•Junior center Abuk Akoi leads the team in rebounding with 8.4 rpg. Akoi became the first Mustang this season to record a double-double with 15 points and 15 rebounds at Concordia-St. Paul on Dec. 7.

•Sophomore guard Jenna Borchers has connected on a team-high 27 3-pointers and leads the team in assists with 27.

•Senior forward Caleigh Rodning has missed the last seven games with an injury.

•Senior Caleigh Rodning ranks second in free throws made with 386 and is 23 from tying Andrea Schreier (1997-2001) for the all-time record of 409. She also ranks fourth in free throw pct. (83.6) and sixth in free throws attempts (464). Rodning is also five rebounds shy of becoming the 11th in player in team history to record 600 rebounds.

•SMSU snapped a 23-game losing streak versus MSU a season ago and earned its first-ever season sweep.

•SMSU dropped the match-up earlier this season with a 76-60 loss in Mankato on Dec. 6.

•Concordia-St. Paul is 8-6 overall, 5-3 NSIC, after a weekend sweep over UMary and Minot State.

•Junior forward Sidney Wentland is scoring 15.4 ppg with a team-high 48-of-68 from the free throw line.

•Amanda Johnson is in her fourth season as head coach and holds a 70-51 overall record.

•Minnesota State is 9-3 overall, 6-2 NSIC, after advancing its winning streak to three games with a weekend sweep over Minot State and UMary.

•Junior forward Rachel Schumski is averaging 8.9 ppg and leads the team in rebounding with 6.2 rpg.

•Emily Thiesse is in her eighth season as head coach with a 212-125 overall record.