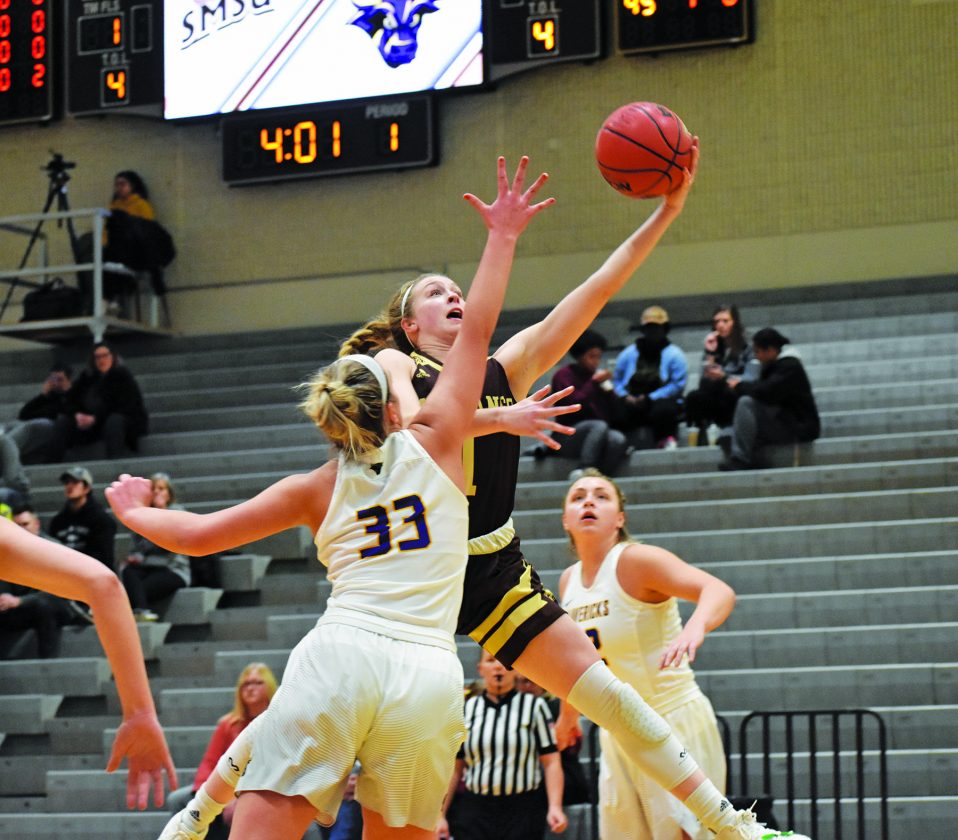 Photo by Sam Thiel SMSU’s Meleah Reinhart goes up for a layup during their game against MSU Mankato on Saturday. The Mustangs defeated the Mavericks 78-56.

MARSHALL — Holding a lead going into the fourth quarter in Friday’s game against Concordia-St. Paul, the Southwest Minnesota State University women’s basketball team saw the Golden Bears outscore the Mustangs 26-7 to turn the tide and hand SMSU a tough loss.

With a bitter aftertaste still left in their mouths, the Mustangs made sure they weren’t going to make the same mistake twice in one weekend.

Thanks to a hot-shooting performance and some dazzling defense, SMSU quickly set the tone of Saturday’s matchup against Minnesota State University, Mankato and didn’t look back, rolling to a 78-56 victory for its second conference victory of the season.

SMSU coach Tom Webb was proud of the way his team answered the call after Friday’s finish and said they were able to put together a complete outing.

“We played for 40 [minutes]. They did a great job of responding; we played for 40 minutes and when we play for 40 minutes, we’re going to have a shot every night in this league and if we don’t play for 40, the league’s too good, we won’t have a shot,” Webb said. “We did a good job on the glass, took care of turnovers and passed the basketball with freedom and looseness and I’m just proud of them.”

The Mustangs raced out of the starting gates on the offensive end, going up 6-2 in the early stages before a layup from Sadie Stelter gave SMSU its first double-digit lead at 16-6 with 2:43 left in the first quarter. The two teams then traded points to close the frame, as a Jenna Borchers 3-pointer extended the Mustangs advantage to 21-10 heading into the second quarter.

Despite the quick start, SMSU struggled to keep the momentum going early on in the second quarter, and MSU Mankato took advantage. The Mavericks opened the frame with a 13-6 run to draw to within four at 27-23 with 5:04 left in the first half, but SMSU continued to maintain its lead, as a 3-pointer from Borchers and a 3-point play from Sara Teske gave the Mustangs a 33-26 advantage going into the locker rooms.

“We had to get over their press. We had to know what passes to make and we focused really well on that, just getting the ball ahead and we started pushing it more,” Reinhart said. “We started the year not playing as fast, but lately we’ve been playing fast, so we tried to push the ball more.”

After a solid first half, the Mustangs saw the Mavericks draw to within four in the beginning stages of the second half, but SMSU went on a key 10-2 run over the next few minutes. A Stelter 3-pointer, a pair of free throws and a 3-pointer from Erin Baxter and a layup from Sam Wall pushed the Mustangs lead to 45-33 with 5:19 left in the third quarter. SMSU continued to command the pace the rest of the way, never letting its lead get below 12 while increasing it to as large as 22 in the fourth quarter en route to the 78-56 victory.

Five Mustangs scored in double figures, with Reinhart leading the way with 18 points while Borchers added 13, Stelter had 11 and Abuk Akoi and Madison Gehloff each had 10. Akoi led in rebounds with 14 while Baxter led in assists with five. As a team, SMSU shot 27-of-57 from the field (47.4%), including 10-of-25 from beyond the arc.

Defensively, the Mustangs held MSU Mankato to just 31.9% shooting (22-of-69), including allowing just two 3-pointers. Akoi also had an impressive day defending the paint, recording seven blocks and tying the single-game record in the process.

“We guarded the arc really well and Abuk was really good inside,” Webb said. “Anytime you can force the ball down the pipe to her, she does a good job inside of helping and I thought we did an overall good job of guarding in transition.”

SMSU (7-8, 2-8 NSIC) will hit the road next weekend, beginning with a Friday night matchup against Minot State University at 5:30 p.m. before facing the University of Mary on Saturday. Reinhart said their biggest takeaway is continuing to play with confidence and to bring lots of energy right away.

“I think we’ve taken away that we can do it and we’re very capable to win any game that we’re in,” Reinhart said. “When you come out with energy, the other team has to match you, so that’s another thing we can take away.”