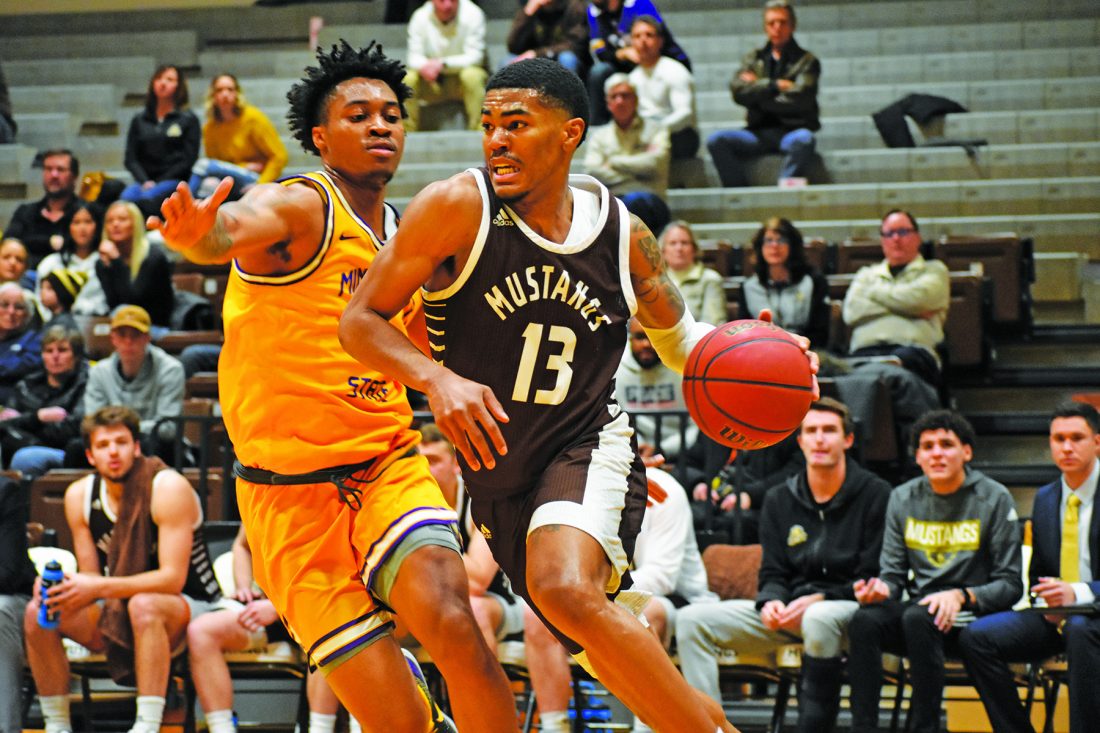 Photo by Sam Thiel SMSU’s Kenny Byers drives past a MSU Mankato defender during their game on Saturday. The Mustangs fell to the Mavericks 53-46.

MARSHALL — Held to a season-low 27.3% shooting (15-of-55), the Southwest Minnesota State University men’s basketball team struggled to generate points en route to a 53-46 loss to Minnesota State University, Mankato on Saturday night. Saturday’s contest was the first time since Feb. 26, 2011 that SMSU was held to under 30 percent shooting in a game.

“I think right now it’s so much about working through our mental part of the game; our ability to have confidence in ourselves, our ability to trust our teammates and our ability to risk failure. Right now, we have a lot of guys that are second-guessing themselves and they’re making mistakes that are very unnatural to what they can do,” SMSU coach Brad Bigler said. “For our ability to just continue to believe in each other and to be great teammates and pick each other up when things don’t go well, that’s so important in turning this thing around. A lot of times right now we have guys when they make a mistake, they are solely worried about themselves and right now we have to change our mindset and be great teammates so when guys make mistakes, one, we have to forgive ourselves and two, we have to pick each other up and move on to the next play and not allow it to affect three plays.”

The Mustangs converted on a Kenny Byers jumper on its second trip down the floor to take a 2-0 lead, but unfortunately for SMSU, that was the only time it led the entire game. MSU Mankato scored the next six points before later pushing its lead to 18-12 with 6:15 left in the first half.

Looking for a spark, the Mustangs were able to open the second half with a small run to draw to within one at 33-32, but the Mavericks answered back with a burst of their own to take a 10-point lead with 10 minutes to go.

The SMSU defense was then able to piece together a string of stops on the defensive end, forcing four MSU Mankato turnovers which led to the Mustangs making it a three-point game. A layup by Andy Stafford and free throws from Jake Phipps, Byers and McCray brought it to 44-41 in favor of the Mavericks with 4:19 left, but a 3-point play from Kevin Krieger gave MSU Mankato a much-needed response.

Byers connected on a jumper with 2:12 remaining to bring SMSU to within three again, but the Mustangs couldn’t draw any closer, as MSU Mankato closed the game at the free-throw line to earn the victory.

Byers led the way for SMSU with 23 points while McCray added nine and Stafford had six. Brian Dayman led in rebounds with 11 while McCray led in assists with two.

SMSU (5-11, 2-8 NSIC) will hit the road next weekend, starting with a Friday night matchup against Minot State University at 7:30 p.m. before facing the University of Mary on Saturday. Bigler said their biggest takeaway is going back to the fundamentals and cleaning and fine-tuning multiples things, especially on the offensive end.

“I think it’s all about the fundamentals right now. We need to clean up our mistakes, our footwork, our poor passing and just our rhythm on the offensive end with regards to catching the ball shot-ready,” Bigler said. “It’s really fundamental, it’s building these guys from the foundation and providing confidence and then after that, just being great teammates.”