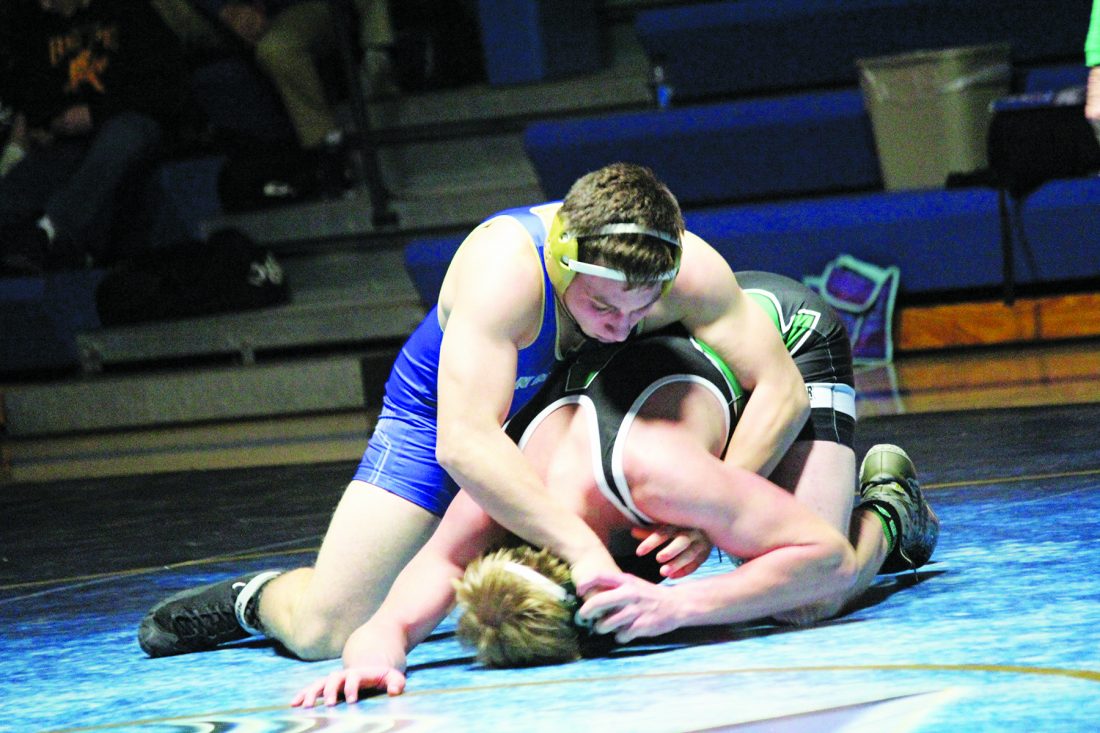 Photo by Jake Przytarski Minneota’s Cole Sanow jostles for position against Pipestone’s Mason Krakow during the 182-pound bout of a triangular Thursday. Sanow earned a 7-2 decision in the bout and Minneota defeated Pipestone 33-30.

MINNEOTA — Fresh off a strong performance this past weekend at the Rumble on the Red tournament in Fargo, North Dakota, the Minneota wrestling team returned home for a triangular meet with Quad County and Pipestone Area on Thursday hoping to continue its impressive run.

With a raucous crowd on hand, the Vikings gave their fans plenty to cheer about with a pair of hard-fought victories over the Cobras in a 61-6 final and a down-to-the-wire thriller over the Arrows, 33-30.

Minneota coach Matt Myrvik sensed that there may have been some lingering fatigue from the long weekend of competition, but came away pleased overall with the team’s performance.

“Well I think we showed maybe we were a little tired from the big long weekend at the Rumble but I thought they wrestled well,” said Myrvik. “We’re putting out a lot of young kids, so is Pipestone, and it’s about learning as the year goes on and battling through some positions.”

After Quad County fell to Pipestone in a 66-12 final to begin the triangular, the Cobras faced host Minneota in a dual that the Vikings controlled from start to finish.

Minneota’s Troy VanKeulen opened the match with a pin over Quad County’s Tarrick Rupp (1:51) before Peyton Gillund stepped to the mat and earned a decision victory over Hunter Wilke to give the Vikings a 9-0 lead. Following a forfeit win for Eric Carrasco, the Vikings added to their lead as Truman Wambeke won via fall (1:45) over Chase Corner, and Zack Fier defeated Luke Kluver via major decision to make it 25-0.

At the 138 and 152-pound weight classes, the Vikings picked up two additional wins via pin as Kade Lozinski defeated Caleb Hoff (0:30) and Blake Reiss defeated Richard Vaughn (1:11). The Cobras earned their lone victory at the 160-pound weight class with Jack Howard defeating Branden Johnson 39 seconds in with a pin. Minneota’s Jonah Gruenes, Cole Sanow, Hudson Scholten and Jayden Gamrak rounded out the rest of the victories for the Vikings all by way of forfeit.

Looking to build off their dominant win over the Cobras, the Vikings powered through a 4-0 deficit to start the match following a major decision loss to Peyton Gillund, and took a 9-4 lead thanks to a major decision victory for VanKeulen and a technical fall win for Eric Carrasco. The Arrows responded with a win via fall at the 126-pound weight class, but the Vikings notched four straight wins after as Zack Fier edged his opponent with a pin before Kade Lozinski and Jonah Gruenes each won decisions and Blake Reiss won in a forfeit to make it 27-10.

The Arrows climbed back into the match with a forfeit victory and a decision win before Minneota’s Cole Sanow earned three crucial points that pushed the Vikings to a 30-18 lead. With Pipestone notching wins at the next two weight classes with pins, the dual came down to the heavyweights with the score knotted up at 30. In the end, Minneota’s Jackson Esping had his hand raised in victory with a decision win over Nick Colvin to give Minneota a 33-30 win.

“I think we’re a young team that’s learning as we go, and they’ve done an outstanding job in practice and we’re going to keep building as the year goes on,” said Myrvik. “Pipestone’s got some really good wrestlers down low and we kind of match up really well with each other as far as experience, a lot of close matches that went both team’s ways.”

Next up for Minneota is the Milbank Dual Tournament in South Dakota on Saturday. Quad County will return the mat on Saturday as well with the team competing in the BBE Invite Tournament.