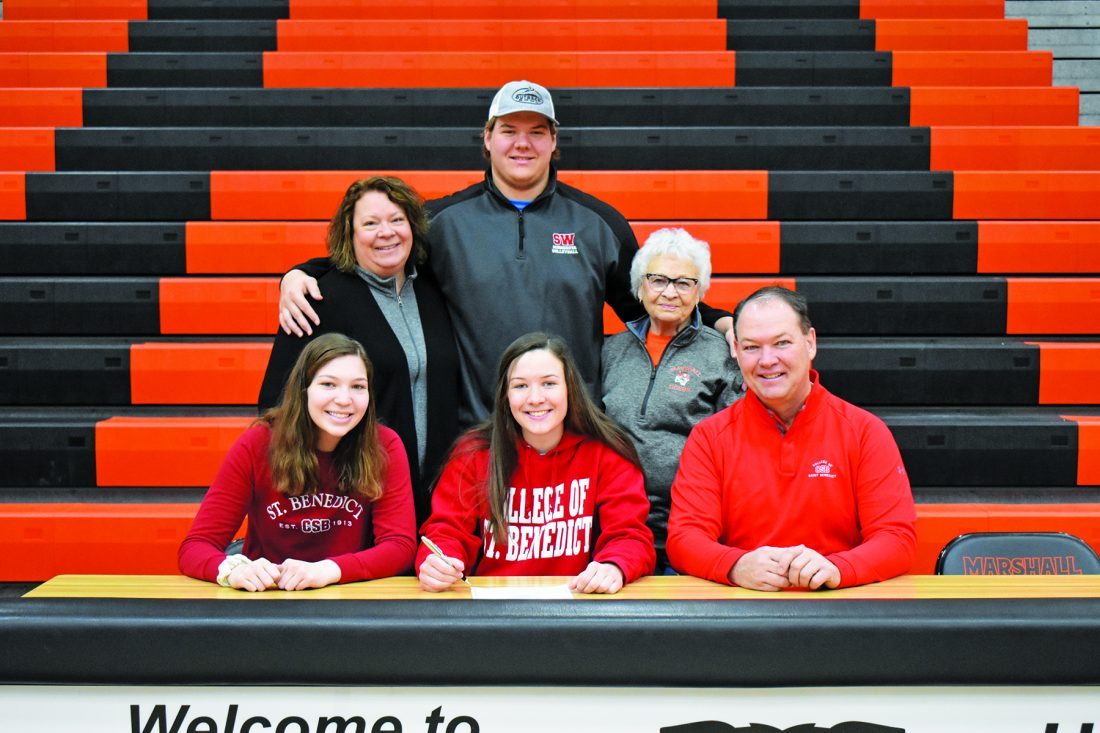 Photo by Sam Thiel Marshall’s Paige Andries poses for a photo with her family after signing her National Letter of Intent on Friday to play volleyball at the College of St. Benedict’s.

MARSHALL — Three years ago, Paige Andries got to watch her older brother Blaise sign his National Letter of Intent to play football at the University of Minnesota. On Friday morning, it was her turn to complete the next step to her athletic career, as the Marshall senior signed her National Letter of Intent to play volleyball at the College of St. Benedict’s.

Andries said there were a couple of factors that ultimately drew her to St. Joseph, including her family, the campus and the camaraderie of the team.

She’s also hoping to major in biology, with a plan to get her Master’s in genetic counseling.

“I’ve been there before since my dad is an alum of St. John’s,” Andries said. “I loved the campus and met the coaches at one of their games my sophomore year and they really wanted me and I was super grateful that they were so nice and the teammates are super welcoming.”

The past few years, Andries has helped lead the way for the Tigers on both the court and the diamond, guiding Marshall to state tournament appearances the past two seasons in basketball and volleyball. She attributed the success to the impact her coaches and teammates have had on her.

“They’ve pushed me in practice a lot and I can’t say thank you enough to them for helping make me a better player and person and having them by my side and supporting me through all of this,” Andries said.

Next year, Andries will join a St. Ben’s team that is coming off a season where CSB finished with a 26-6 record and a trip to the NCAA Tournament before falling in the quarterfinals.

Before she heads up to St. Joseph, Andries still has one more season on the court with the girls basketball team as well as a final spring with the softball team. She said she’s looking forward to spending quality time with her teammates and friends during the last part of her high school career.

“Spending the rest of this time with all of my friends and teammates and trying to go get something at the state basketball tournament,” Andries said.

The sky in April 2020 — the changing of the stellar guard