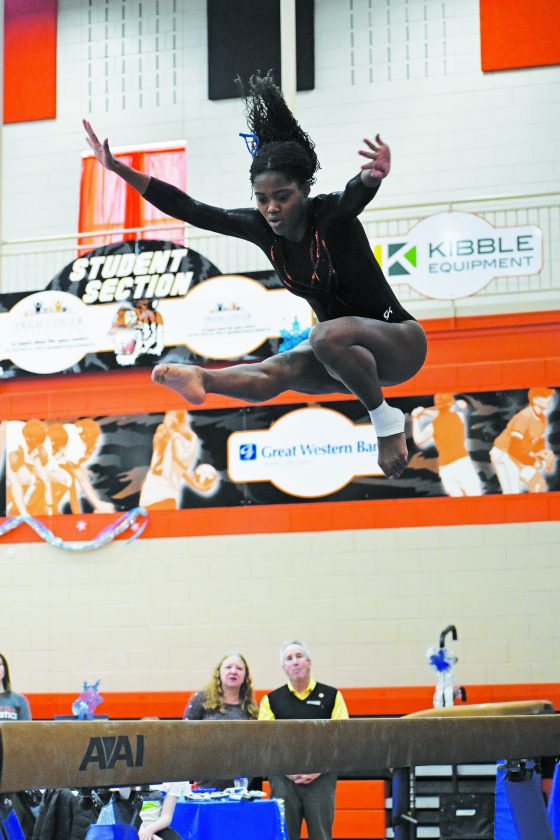 Photo by Sam Thiel Marshall’s Saphi McFarquhar performs on the balance beam during their home invitational on Saturday.

MARSHALL — The Marshall gymnastics team returned home over the weekend to hold its annual invitational, placing fifth overall with a score of 126.950.

Marshall coach Larvita McFarquhar said she was proud of the way her team stepped up and challenged themselves with new skills.

“I was so proud of them, they all stepped up and did their best,” coach McFarquhar said. “They went out there and worked on their new skills.”

Coach McFarquhar said their key throughout the meet was boiled down to one simple aspect.

“Teamwork,” she said. “Everyone had to step up because our main varsity person was hurt, so she could only do two events. Everyone stepped up and filled their roles of what they needed to do to get us into that fifth place position.”

Marshall will compete again on Thursday against Windom Area at 6 p.m. Coach McFarquhar said their biggest takeaway will be cleaning up their skills and continuing to build up their confidence.

“Just cleaning up some of the skills that we’re working on and just pushing them to believe in themselves and getting that confidence where it needs to be,” coach McFarquhar said.