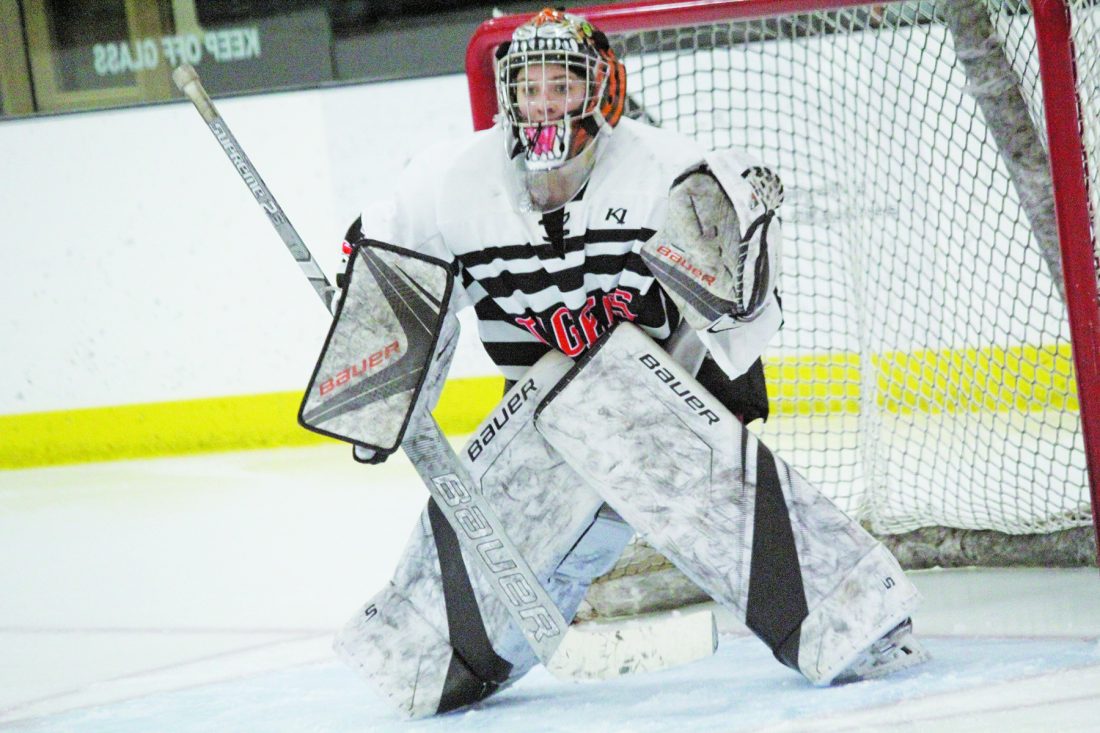 Photo by Jake Przytarski Marshall’s Emma Klenken defends the net during their game against Worthington on Tuesday.

MARSHALL – A three-goal burst by Worthington in the first period of Tuesday’s Big South Conference matchup provided too steep of a deficit for the Marshall girls hockey team to climb back from despite a two-goal rally in the third period. The 4-3 loss moves Marshall to 8-8-1 on the season.

Early on in the opening frame, the Trojans established control of the puck in Marshall’s defensive zone where they fired off a pair of quick shots before netting their first goal of the game less than three minutes in. By the 11-minute mark of the period, the Trojans saw their lead grow to 3-0 with two additional goals that forced the Tigers to take a timeout to regroup.

Marshall coach Cassi Weiss implored her team to refocus and approach the game as if it were still 0-0.

“I kind of just said bring it back to a 0-0 game,” said Weiss. “If we let ourselves get down we’re never going to be able to climb out of this hole so we just really tried to stay positive and keep giving 100% or trying to get up to 100% effort so we could get some goals and get back in that game.”

The Tigers were able to turn the page on the disappointing start late in the period with a short-handed goal by Leah Schaefer to make it 3-1, and a milestone moment for goaltender Emma Klenken, who recorded her 2,000th save of her career. Klenken was quick to credit her teammates in helping her reach the milestone.

“It just felt really exciting,” said Klenken. “I’m glad that my team has always been there to help me. A lot of the saves aren’t possible without them clearing bodies in front.”

Weiss praised Klenken for continually stepping up for the team throughout her career with her stout play in net.

“It’s a great milestone to achieve and we’re definitely super proud of everything that she’s done for our program,” said Weiss. “She’s been playing since she was in eighth grade. We’re really lucky to have her. She is a key player in all of our games and I think she keeps the score a lot lower than maybe it should be and we’re just really proud of her.”

After the Trojans added to their lead with the lone tally of the second period to make it 4-1, the Tigers went to work in the final frame looking to get a quick goal in order to build momentum and possibly mount a comeback.

“We had to get out there we had to get that first goal and we had to get it quick because as soon as we get that goal we knew that momentum would turn back into our favor and that’s kind of what happened,” said Weiss.

Captain Logan Sherman did her part with a goal off a rebound just under four minutes in before Tessa Gannott cut the deficit to one four minutes later to make it 4-3. The Tigers spent the remaining eight and half minutes of play battling for the equalizer but were unable to find the back of the net for a fourth time, as the Trojans escaped with a 4-3 win.

Klenken finished the game with 24 saves on 28 shots in net for the Tigers.

Marshall will be back in action on Thursday when the team hosts New Ulm for a 7 p.m. start.