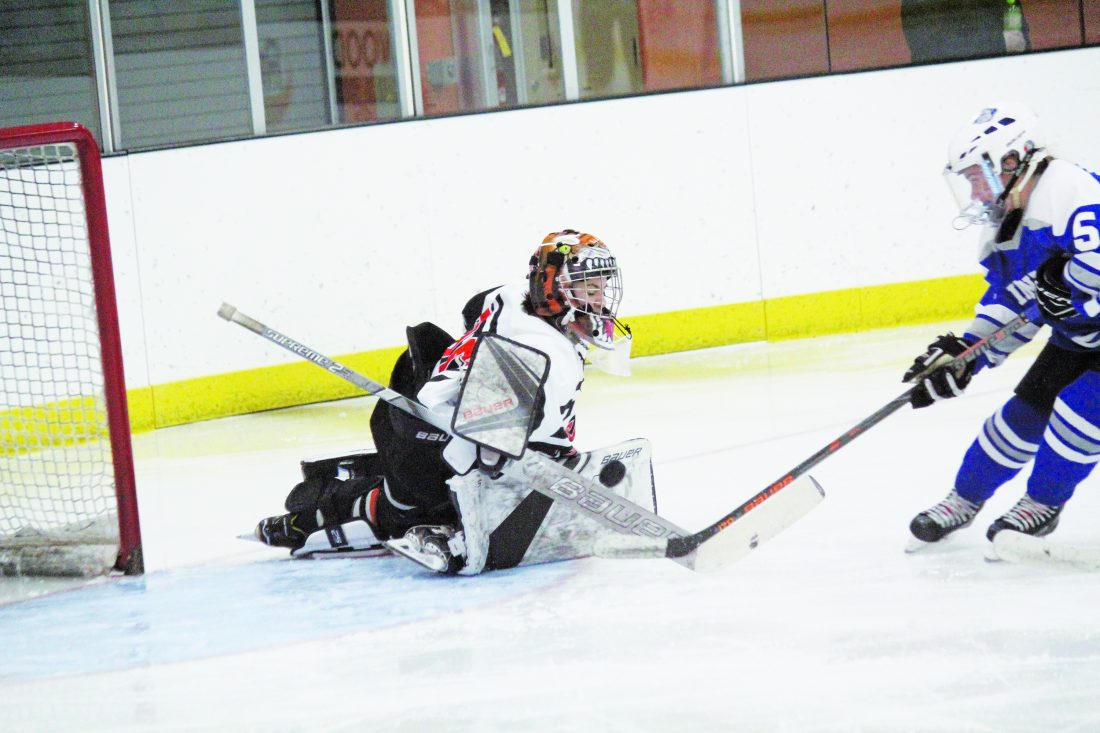 Photo by Jake Przytarski Marshall’s Emma Klenken knocks away a scoring attempt by Minnesota River during their game on Friday. The Tigers defeated the Bulldogs 2-1.

MARSHALL – A tie-breaking goal by Logan Sherman in the waning seconds of the second period stood as the game-winner for the Marshall girls hockey team in Friday’s pivotal Big South Conference matchup at home against Minnesota River. The 2-1 victory for the Tigers moves them into third place in the conference standings.

Marshall coach Cassi Weiss identified the team’s fast start and the barrage of pucks making it through on the Bulldogs’ net as the keys to their success.

“We were getting a lot of pucks to the net which is something that we really talked about,” said Weiss. “The other thing was that we had a really strong start and we were really going after the puck and giving it 100%.”

The strong start for the Tigers was highlighted by a pair of golden opportunities to score in the opening minutes of play by defensemen Emmy Barker and Sherman, who forced Minnesota Rivers’ netminder to be on her game early with a pair of quality stops. The contest remained scoreless until the 12:47 mark of the period when the Bulldogs broke through on an odd-man rush to take a 1-0 lead.

Undeterred, Marshall stuck to its game plan and remained buzzing around the Bulldogs’ defensive zone late in the period before Kaitlyn Timm created a turnover and made the opposition pay with a top-shelf goal to even the score at one apiece.

With the score still tied in the second period, Marshall relied heavily on goaltender Emma Klenken to make key saves througout the frame with the Bulldogs holding a decided edge in shots on goal. As a token of appreciation for her sharp play, Sherman provided some breathing room on the scoreboard with a slap shot goal from the blue line to make it 2-1 with 13 seconds remaining in the period. Sherman credited her teammates for helping to set up the eventual game-winner.

“When I got the puck, I saw their two players coming towards me and I saw Kalyn DeVlieger in front of the net so I was aiming for her stick in front to try and use that, but it worked out going in,” said Sherman. “My team did a really good job of setting that up and it was a great pass from Shelby (Ormberg) up to me.”

According to Weiss, the goal was a major confidence-booster for the team that fueled their exceptional play in the final period.

“It definitely was a confidence booster and it definitely helped us play the way that we did in the third,” said Weiss.

Utilizing an aggressive forecheck, Marshall protected its lead througout the third period before a pair of late Bulldog power plays put their one-goal advantage in jeopardy. After killing off the first power play, the Tigers were forced to weather a storm in the final 30 seconds of the game with the Bulldogs pulling their goalie to add an extra skater to make it a two-man advantage. The comeback bid would fall short in the end, however, as Klenken made the saves needed to seal Marshall’s 2-1 victory.

Klenken finished the game with 37 saves and picked up her sixth win of the season between the pipes.

Next up for the Tigers (8-7-1) is another home matchup against Worthington at 5:30 p.m. on Tuesday. Looking ahead, Sherman is focused on continuing to strengthen some areas of their game in Monday’s practice before their game the following day.

“I think we came off obviously pretty high after that (win) and in practice on Monday (we) just (need to) keep working on our shots and rebounds,” said Sherman. That’s a big thing that we’ve been working on and we want to bring that into our next game on Tuesday.”