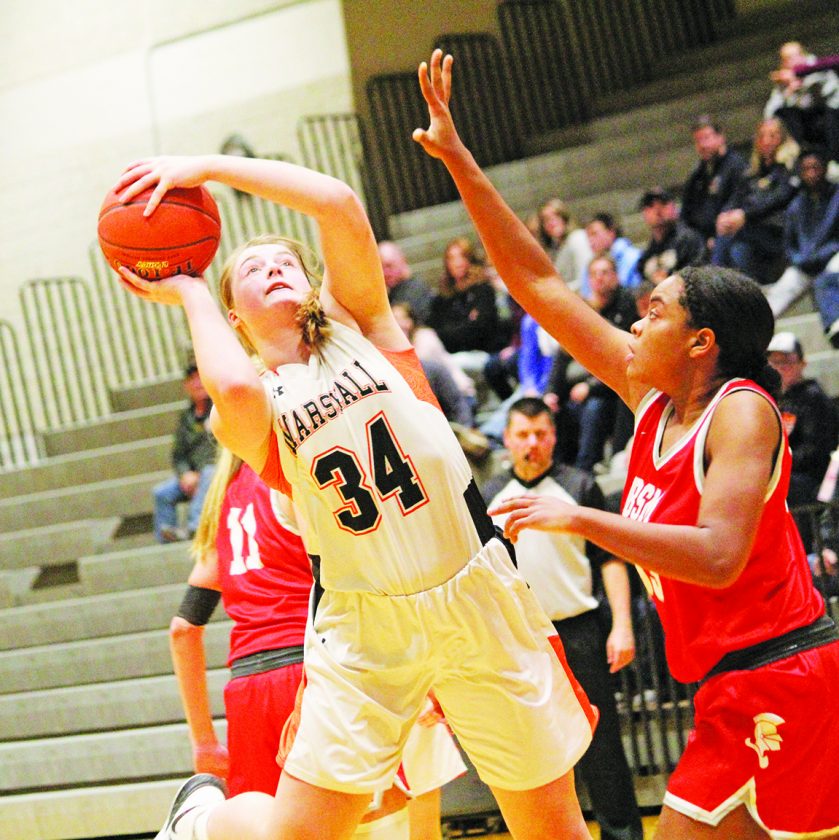 Photo by Jake Przytarski Marshall’s Emily Meier goes up for a shot during their game against Benilde-St. Margaret’s on Tuesday. The Tigers defeated the Red Knights 62-37.

MARSHALL – With the goal of maintaining its pristine record into the New Year serving as an extra layer of motivation, the Marshall girls basketball team battled hard for all 36 minutes of play in Tuesday’s Borch’s Holiday Classic finale and were rewarded with a dominant 62-37 win over Benilde-St. Margaret’s.

Marshall coach Dan Westby was pleased with the team’s performance and said it’s always critical to earn wins over teams that they may see down the line.

“We felt like this was an important game coming in. It’s a team that’s in our class, so anytime we face teams that we could see down the road, those are important matchups for us,” said Westby. “We feel good about the fact that we came out with a win.”

Even with Marshall’s strong effort put forth throughout the contest, the Red Knights were still able to establish the early momentum in the first half as they opened the scoring with a three-pointer and went on to take a 10-2 lead that forced the Tigers to regroup. In response, Marshall leaned on Jordyn Hilgemann, whose three-pointer and two made free throws moments later brought the Tigers back to within one.

Unfortunately, after the quick scoring surge, the team would be forced to look for scoring contributions elsewhere for the remainder of the half with Hilgemann having to sit due to foul trouble. Stepping up big in Hilgemann’s absence was Lenei Estrada, who scored 10 points down the stretch that helped lift the Tigers to a 28-19 lead at halftime.

Westby credited Estrada for stepping up big when they needed it and hopes she can continue to provide a boost through her ability to score.

“Lenei needs to look to score more and certainly in a situation like that where Jordyn’s in foul trouble she’s going to have to look for it even more,” said Westby. “We’re going to have games like that where we don’t have a full lineup out there for whatever reason and in cases like that other kids do need to step up and I thought Lenei did a nice job of that.”

The Tigers made it clear early in the second half that they had no intentions of letting the Red Knights back into the game as evidenced by a 14-0 run out of the gate led by Emily Meier, that extended their lead to 23 at 42-19. Westby described the dominant stretch as the team’s best of the game.

Marshall maintained its large lead into the final minutes of play before providing its reserve players with some valuable playing time down the stretch in the winning effort.

The Tigers (9-0) will be on the road for their next two matchups against Windom on Friday at 6 p.m., and in Mankato to take on the Scarlets at 5 p.m. on Saturday. After reaching their team-goal with the win over Benilde-St. Margaret’s to move to 9-0, Westby is hopeful that they can meet another goal by putting together a strong performance against a section opponent.

“One of the goals we set was to be 9-0 on January 1 and we’re going to achieve that goal so now we move on and set some new goals,” said Westby. “Certainly, playing well within the section is one of them, so we need to do that on Saturday.”