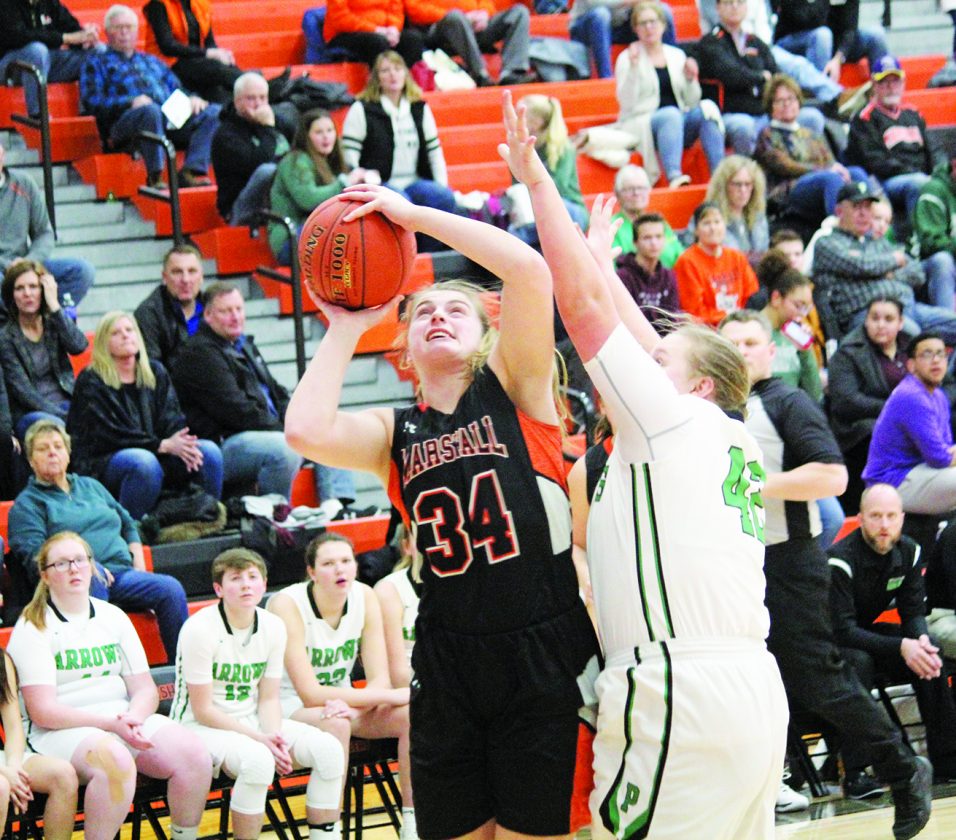 Photo by Jake Przytarski Marshall’s Emily Meier looks to score around a Pipestone Area defender during their game on Friday. The Tigers defeated the Arrows 69-37.

MARSHALL — Off to its best start through 12 games since the 2013-2014 season, the seventh-ranked Marshall girls basketball team entered Friday’s Big South Conference matchup against Pipestone Area determined to keep its unbeaten streak alive with another strong showing on its home court.

Guided by their calling card of dominant full-court pressure, along with a strong inside presence established on the offensive end of the floor led by Emily Meier, the Tigers got the job done in convincing fashion with a 69-37 drubbing of the Arrows.

Marshall coach Dan Westby lauded Meier for her performance in the paint which helped the team overcome its outside shooting woes.

Meier’s night got off to an especially strong start as she opened the scoring for Marshall with six straight points to give the Tigers a quick 6-2 lead. Following the offensive surge by Meier, leading scorer Jordyn Hilgemann began to heat up as well and knocked down a three-pointer before adding a pair of fastbreak baskets to push the Tigers’ lead to 17-6.

Facing an onslaught of defensive pressure, the Arrows had no answer for Marshall’s full-court pressure and were outscored 9-1 midway through the half–bolstering the Tigers’ lead to 26-7, their largest advantage to that point.

Westby was pleased with the team’s discipline on defense in being able to recognize and counter Pipestone’s offensive tendencies.

Pipestone managed to cut the deficit to 17 by the end of the half by outscoring Marshall 10-7 down the stretch, but the Tigers remained comfortably ahead with a 33-16 advantage at the break. Meier and Hilgemann combined to score 25 of the team’s 33 points through the first 18 minutes of play.

Out of the break, Meier and Hilgemann continued their dominant offensive display with a give and go play that left Hilgemann with a wide open lane to the basket for an easy finish that extended Marshall’s lead to 35-16. Following another layup by Hilgemann and two more baskets by Corrin Naughton and Abby Wendorff, the Tigers saw their lead grow to 41-20 lead, but ran into some scoring troubles in the minutes that followed.

Westby said their issues on the offensive end stemmed from their inability to knock down outside shots as they were forced to rely heavily on transition scoring.

“I felt like we didn’t shoot the ball all that well tonight and got off to a slow start in the second half. It just felt like we were stuck on 41 forever and just had a hard time,” said Westby. It felt like the best looks we got were in transition. We were able to get some easy baskets (in transition), but it just felt like points were hard to come by for a long time.”

Marshall’s sluggish start offensively in the second half was negated by the continued excellence of its defense which prevented the Arrows from chipping away at the deficit. As a result, the Tigers remained in complete control all the way to the end as they saw their 20-point lead at the midway point of the half grow to 30 by the end of the game in a 69-37 victory.

The Tigers (13-0) will be back on their home court today when they host Mankato East in a crucial section matchup. Westby anticipates that the talented Cougars club will provide his team with a tough test.