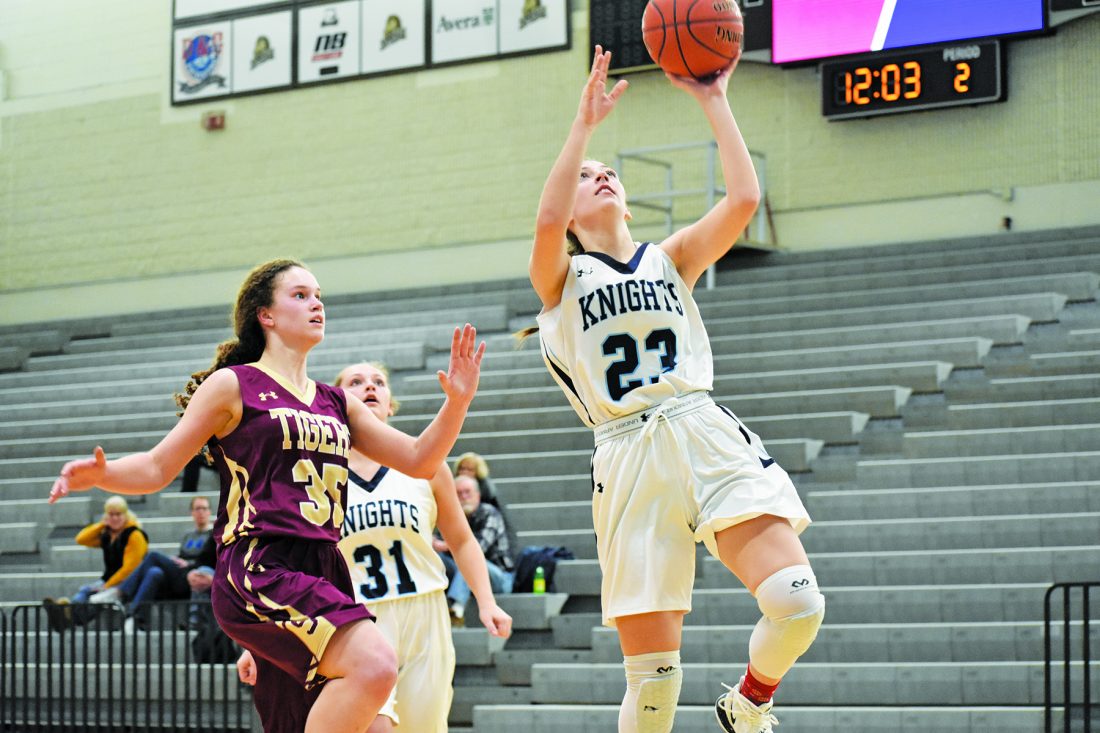 Photo by Sam Thiel RTR’s Shawna Thomsen goes up for a layup during their game against Springfield on Tuesday. The Knights fell to the Tigers 63-56.

MARSHALL — The Russell-Tyler-Ruthton girls basketball team knew they had a challenging task in front of them on Tuesday when they squared off against Springfield, who entered with a 6-1 record and owned a five-game win streak. Despite being in the midst of a tough stretch, the Knights went toe-to-toe with the Tigers and were able to stay within striking distance, but Springfield made just enough plays down the stretch to keep RTR at bay and earn a 63-56 victory over the Knights at Southwest Minnesota State University.

RTR coach Steve Krause said despite the loss, he felt his team made a lot of improvements and was pleased with their performance against a tough opponent.

“We’re getting really close; they’re a good team, they’re 6-1, and I’m very happy with the way we worked,” Krause said. “We have a few little things to clean up; they shot really well from the line and that hurt us and in the first half we probably had too many turnovers. That was kind of the difference of the game, but it was a great effort by our girls.”

The back-and-forth play all game was evident from the start, as Springfield raced out to an 11-6 lead before a McKinley Schreurs layup, 3-pointer from Shawna Thomsen and layup by Haley Muenchow gave the Knights the lead back at 17-15.

The two teams then traded points over the next several minutes, with the margin never getting larger than a few points for either side. The Tigers would begin to pull away thanks to a 5-0 run to take a 27-21 advantage with 4:15 left in the first half, but a Shawna Thomsen layup with 20 seconds remaining made it a three-point game at 32-29, only to see Springfield connect on a buzzer-beater jumper to give the Tigers a five-point lead at the break.

In search of a spark, the Knights traded points with the Tigers to begin the second half before back-to-back layups by Shawna Thomsen brought RTR to within two at 45-43 with 12 minutes left. The Knights continued to create strong scoring chances over the next few possessions, as a Muenchow layup gave RTR the lead at 52-51 with 7:45 to go, but Springfield answered with a 12-4 run to close the game to come away with the win.

Shawna Thomsen led the way for the Knights with 13 points while Schreurs added 11 and Muenchow had eight. Kalleigh Carr led in rebounds with seven while Faith Thomsen led in assists with five.

RTR (1-8) will face Southwest Minnesota Christian today at 7:15 p.m. Krause said they just need to continue to improve each day and play with more and more confidence.

“We’ve come a long ways from where we started and we know that,” Krause said. “This [Springfield] is a very good ballclub and they’ve won by around 20 or more points in nearly every game except for their loss to Sleepy Eye St. Mary’s. We didn’t win the game, but we played very well and we’ve gotten a lot better.”