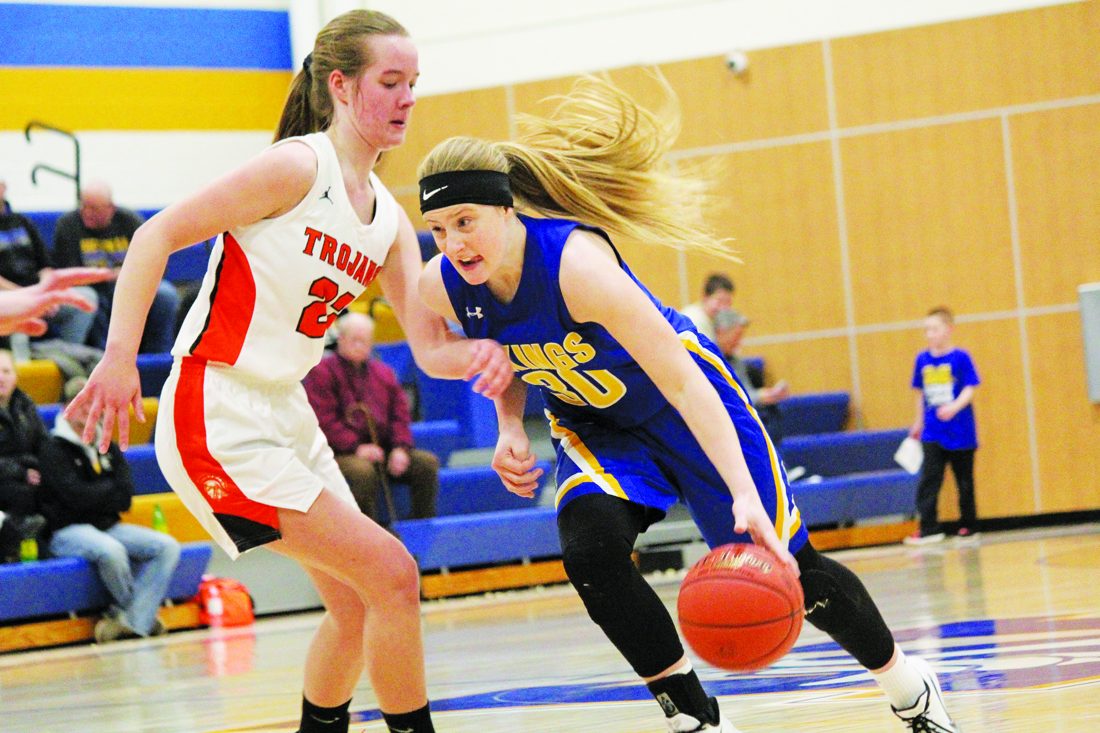 Photo by Jake Przytarski Minneota’s Ireland Stassen drives around a defender during Monday’s game against Ortonville. The Vikings defeated the Trojans 105-20.

MINNEOTA — After suffering their first loss of the season this past Saturday against No. 8 Goodhue in Class AA, the top-ranked Minneota girls basketball team was quick to put the disappointing result behind them on Monday with a 105-20 drubbing of visiting Ortonville.

The Vikings were once again without one of its top scorers in Morgan Hennen, who sustained an ankle injury in a recent game against Kerkhoven-Murdock-Sunburg this past week. Despite being short-handed, the team faced little difficulty lighting up the scoreboard in the first half with a 68-point barrage that had the Trojans on the ropes early on in the contest.

Led by double-digit first half scorers Abby Hennen, Natalee Rolbiecki and Ireland Stassen, Minneota set the tone in the first minute of the one-sided affair with a 6-0 run before growing its lead to 21-6 at the four-minute mark. Before halftime, the Vikings kept their foot on the gas with a dominant 30-4 run that brought their lead to 51-10, before closing out the waning minutes of play with a 17-3 scoring run to make it 68-13 at the break.

With an enormous advantage on the scoreboard to begin the second half, scoring leaders Hennen, Stassen and Rolbiecki were used sparingly before Minneota’s reserves took over to close out the contest. The Vikings went on to win by 85 in a 105-20 rout.

The Vikings finished the contest with four players in double figures as Hennen led the way with 23 points, while Rolbiecki and McKenna Yost each added 18. McKenzie Tolk concluded the game with 11 points as well for the Vikings.