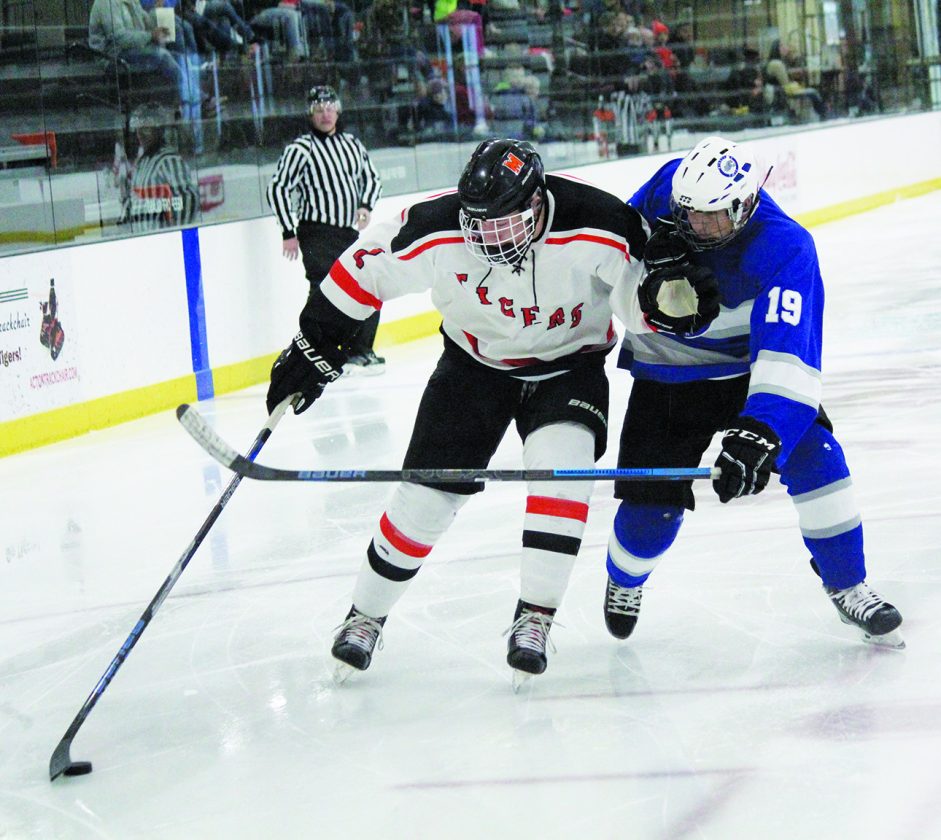 Photo by Jake Przytarski Marshall’s Tristan VanDeVere fends off a Minnesota River defender during their game on Saturday. The Tigers defeated the Bulldogs 3-2.

MARSHALL – A week removed from a fourth-place finish in the Silver Division of the Herb Brooks Holiday Classic tournament, the battle-tested Marshall boys hockey team returned to the friendly confines of Red Baron Arena on Saturday where they staved off a late comeback bid by Minnesota River to beat the Bulldogs 3-2.

According to coach Michael Weiss, the lessons learned from the three-game tournament last week proved to be very valuable in Saturday’s contest as the team played exceptionally well in its own zone.

“We had three really good games up there (against) a good single-A private school (St. Paul Academy) and a good AA team (Northfield), and it was a good challenge for us and it kind of taught us how we need to play in our own zone,” said Weiss. “I think it helped a lot, giving up only 10 shots there in the first couple periods. It was a big boost for us.”

The stout defensive play by the Tigers came despite not having top defenseman Kaleb Welvaert in their lineup, which provided plenty of ice time for fellow defensemen Cooper VanOverbeke, Jenson Meyer, Marco Bayer and Blake Kruse, who all stepped up big in his absence. As a result, the Bulldogs were limited to only three shots on goal in the first period.

Weiss lauded the defensive group for rising to the challenge and playing a large role in the victory.

“We teach the defense to play the game the right way — stay on the D-side, attack puck carriers and they all did a really good job,” said Weiss. “They stepped up huge and that was a big part of the reason we won.”

With play relegated to Minnesota Rivers’ defensive zone for a majority of the period, the Tigers racked up 15 shots and found the back of the net twice. Jackson Bladholm opened the scoring for Marshall with a rebound goal off a strong drive to the net by Tristan VanDeVere. On the team’s lone power play later of the frame, the Tigers struck again with seven seconds remaining when Bayer snuck the puck in the net with a short-side snipe off the faceoff to give Marshall a 2-0 lead. Kruse picked up the lone assist on the goal, his first of three in the contest.

After threatening to add to their lead with multiple scoring chances generated throughout the early stages of the second period, the Tigers broke through again at the 7:43-mark when VanOverbeke netted his first varsity goal on assists from Bryson Whyte and Kruse to make it 3-0. The tally eventually stood as the game-winner for Marshall.

With a comfortable lead in-hand, the Tigers made the costly mistake of playing with fire late in the period by providing Minnesota River with four power play opportunities that included a two-man advantage. After having successfully killed off 48-straight power plays dating back to their first game of the season against Albert Lea, the streak came to an end on the five on three advantage with the Bulldogs finding twine on a one-timer goal to cut the deficit to two.

The Tigers remained clinging to their two-goal advantage all the way until late in the third period when the Bulldogs added a second goal to make it a 3-2 game with three minutes left to play. Thankfully, an inopportune high-sticking penalty by the Bulldogs moments later spoiled their momentum and helped seal Marshall’s victory.

Goaltender Dominik Caspers finished the game with 18 saves on 20 shots and picked up his 10th win of the season.

Marshall will be back on its home ice on Tuesday when the team hosts Worthington for a 7:30 p.m. puck-drop. Looking ahead, Weiss is hopeful that the team can limit the number of penalties taken in the upcoming matchup.

“We kind of got into some penalty trouble in the second period,” said Weiss. “We need to clean that up and I think killing penalties and power plays we just got tired there for the third, so we just have to get fresh and be able to play three straight periods,” said Weiss.