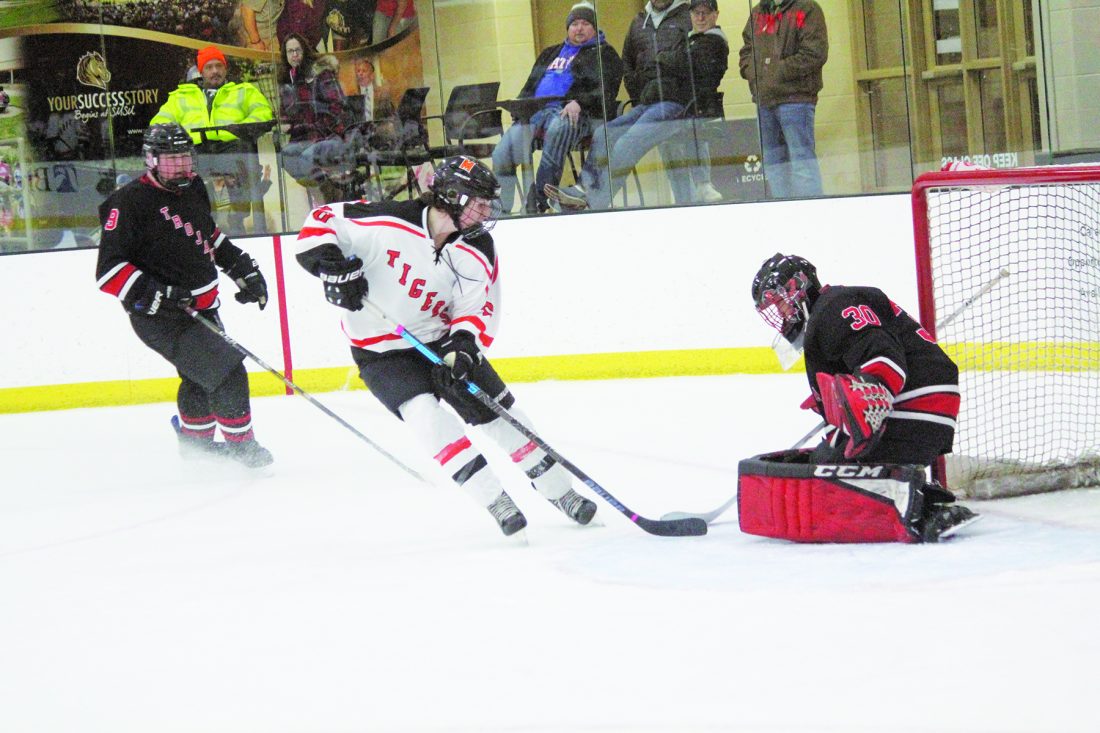 Photo by Jake Przytarski Marshall’s Joe Archbold looks to get past the Worthington goaltender during their game on Tuesday. The Tigers defeated Worthington 3-1.

MARSHALL – An empty-net goal by Jackson Bladholm in the final minute of Tuesday’s home matchup against Worthington provided the Marshall boys hockey team with a collective sigh of relief after being pushed to the brink by the upset-minded Trojans. The 3-1 victory for the Tigers moves them to 11-5 on the season.

The home team was forced to overcome some adversity early on in the contest with goaltender Dominik Caspers going down with an injury in the opening minute of play after making a sprawling save on a Worthington breakaway. With Caspers unable to return to the game, Dillon Loft took over in net for the first time in his career.

Hoping to provide their new netminder with some breathing room on the scoreboard, the Tigers threw everything but the kitchen sink on net in the first period with 17 shots making it through. Worthington’s netminder, who kept the Trojans in the game with numerous key saves, stopped all 17 to keep the game scoreless into the first intermission.

Marshall’s fortunes changed 47 seconds into the second frame when Bryson Whyte deposited the team’s first goal following a successful penalty kill to give the Tigers a 1-0 lead. Blake Kruse and Joe Archbold each picked up assists. Minutes later, Archbold and Whyte each recorded assists on Grant Hoff’s goal at the 8:34 mark of the period to increase the Tigers’ lead to 2-0.

With limited opportunities to score with the bulk of the play in their own zone, the Trojans proved opportunistic late in the second period by capitalizing on a Marshall defensive zone turnover and cutting the deficit to one with an even strength goal to make it 2-1.

Despite holding a substantial advantage in shots on goal, the Tigers remained clinging to a one-goal lead late in the third period before Worthington pulled the goalie for an extra skater. Jackson Bladholm, who netted a key goal in Marshall’s 3-2 win over Minnesota River last week, struck again on Tuesday with an empty net goal that sealed the Tigers’ 3-1 victory.

Loft earned the win in net for the Tigers with 15 saves on 16 shots faced.

Marshall will be on the road for its next matchup against New Ulm on Thursday at 7 p.m.