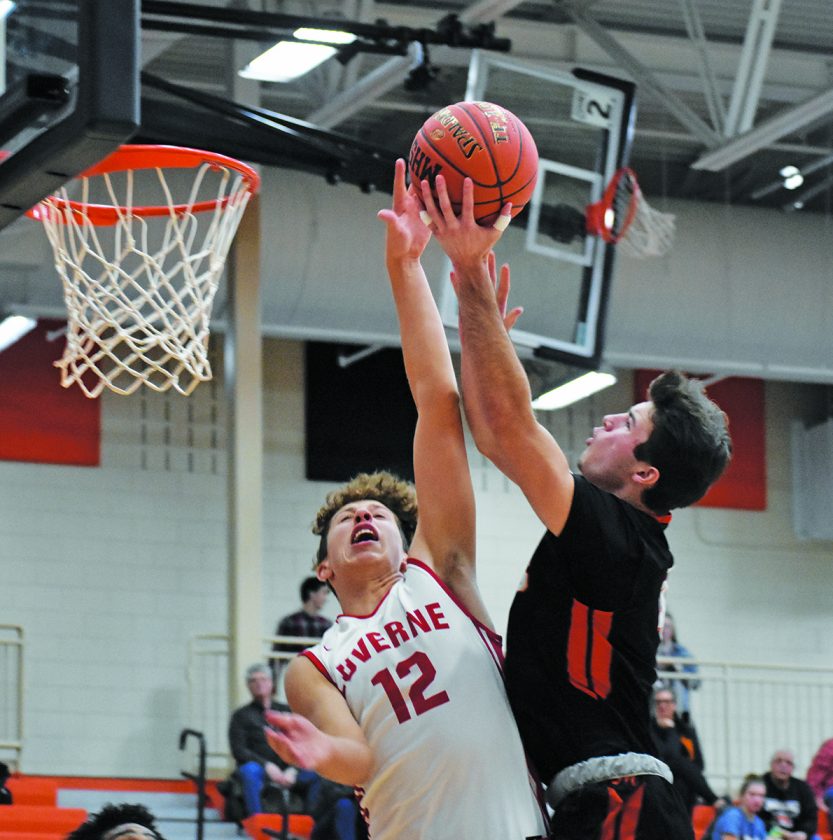 Photo by Sam Thiel Marshall’s Noah Puetz goes up for a layup during their game against Luverne on Tuesday. The Tigers defeated the Cardinals 93-43.

MARSHALL – The No. 5 Marshall boys basketball team used its artistry on offense against the Luverne Cardinals on Tuesday. It’s main masterpiece? It’s work in the paint.

The Tigers scored 58 points near the basket against the Cardinals, helping fuel a 93-43 victory over Luverne and mark its 11th straight win to start the season.

Marshall coach Travis Carroll said they were able to get out to a good start on offense and added they still need to work on some things, particularly on defense, but felt they did a better job in the second half of limiting their mistakes.

“The first half we got off to a fast start offensively. Defensively we gave up 30 in the first half, which is a pretty big number, so we need to continue to work on our effort and focus on the defensive end and understanding personnel and playing with some more urgency,” Carroll said. “I thought the kids did a much better job of communicating, playing with urgency and more effort in the second half of the game. We only gave up 13 points in the second half, which is much more of an improvement; we can’t just rely on our offense each game and try to outscore opponents, we need to be able to bear down on the defensive end and get some stops.”

Marshall jumped out to a quick lead at 11-5 and never looked back, as a 3-point play by Josh Baker gave the Tigers a 21-9 lead before another 3-point play from Brevin Runia pushed their advantage to 20 at the midway mark of the first half.

Maintaining that early aggressiveness on offense, the Tigers continued to attack the rim against the Cardinals. Marshall later found some success around the perimeter, as Konnor Aufenthie connected on a 3-pointer to make it 48-24 before the two teams traded points the rest of the frame to give Marshall a 52-30 lead at the break.

Carroll said their ability to attack the basket helped them get into a rhythm on offense as well as open up the floor and find shooters along the perimeter throughout the first half.

“The kids did a good job in the half-court of attacking the rim and either getting to the rim or getting post touches,” Carroll said. “We also did a good job of finding some perimeter shots and we were able to knock down some perimeter shots as well which helps open up that action to the rim and post touches. We were able to do well on those phases of the game offensively.”

Despite holding a steady advantage, the Tigers continued to stay aggressive on both ends of the court, using their press to help go on a 15-0 start to the second half. Despite getting a free throw that stopped nearly a four-minute scoring drought, Luverne would struggle to put the ball in the bottom of the basket, getting its first field goal of the frame with 12:06 left.

Meanwhile, Marshall kept its foot on the gas pedal, with a layup from Bryce Lance giving the Tigers a 78-35 lead with under 11 minutes to go. Both teams would trade points the rest of the way, but Marshall would hold the Cardinals to just 13 second-half points en route to the win.

Baker led the way for the Tigers with 19 points while Noah Puetz added 15 and Lance had 13. Yahya Black led in assists with three while Black and Puetz led in rebounds with six each. As a team, Marshall shot 64.5% from the field (40-of-62), including 6-of-12 from the 3-point line and making all seven of its free throws.

Defensively, the Tigers limited the Cardinals to 44.1% shooting (15-of-34) while also forcing three turnovers.

Marshall (11-0) will hit the road on Friday to face Pipestone Area at 7:15 p.m. Carroll said their biggest takeaway is they need to maintain a consistent effort during their next stretch of games and they’ll have to be ready to go against a solid Pipestone team.

“We need to continue to play with a more consistent effort and come out ready to go on both ends of the floor,” Carroll said. “We’ve got a lot of games in front of us coming up and we’re taking things one game at a time and Friday night’s a big game for us to come out and compete because Pipestone’s been having a very good year.”