AREA ATHLETICS: The voice of Marshall 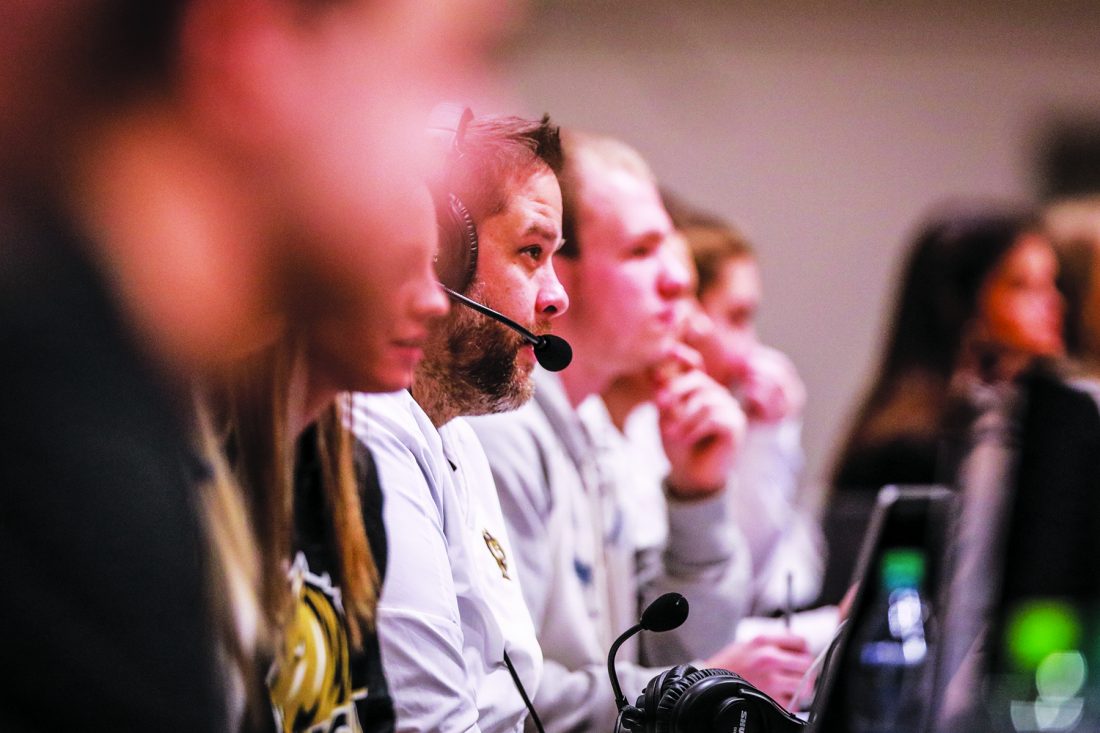 Photo courtesy of Greg Devereaux Photography Ryan “Swami” Rohlik watches the action during a recent Southwest Minnesota State University women’s basketball game. Rohlik has spent the last 20 years as the morning show host at Marshall Radio’s KKCK station as well as the play-by-play broadcaster for both SMSU and Marshall football and basketball games.

MARSHALL – A lot has changed in local media over the past 20 years, but one name and voice has remained constant through it all. That name is Ryan Rohlik, but you may know him better by his nickname, “Swami.”

“Swami” is the morning show host for Marshall Radio’s KKCK station, and a play-by-play broadcaster in the evening where his Southwest Minnesota State University and Marshall High School football and basketball calls are appointment-listening experiences.

Here’s a look back at how Rohlik began his career in the ultra-competitive radio business, and a peek into what has made him so successful in his role as the voice of the Mustangs and Tigers for the better part of two decades.

They say the only way to get better at something is through practice.

During Rohlik’s time as a college student learning the ins and outs of radio and television at Brown Institute in Mendota Heights (now Brown College), he received plenty of it as part of a play-by-play course that had him attend multiple Minnesota Timberwolves games. There, he used a tape recorder to practice doing play-by-play calls.

“I would go with some buddies to the Timberwolves games and they knew what I was doing so I would sit in the middle of them so it wouldn’t be as weird,” said Rohlik. “I would do 10-12 Timberwolves games during the semester and then bring it back and (the professor) would critique you.”

While helpful at the time, Rohlik admitted that there was no substitute for the real thing — likening the experience of calling his first live game on the radio to the buildup before taking the field as an athlete.

“To be live no matter how big of a station it is or whatever, your first time by yourself of cracking the mic is a very unique experience,” said Rohlik. “You’re nervous almost like when you would play a sport or you’re standing in front of a large crowd speaking.”

After graduating from Brown Institute, Rohlik took jobs as an intern with various pop stations around the Twin Cities area before applying for positions back near his hometown of Wabasso. Thankfully, an opening with Marshall Radio allowed him to return to the southwest region of the state where he took over board operator duties during Timberwolves games.

A little under a year after starting with Marshall Radio, Rohlik’s role with the station changed drastically when in January of 2000, 20-year broadcaster and SMSU Hall of Famer Jerry Marquardt, the legendary voice of SMSU football and basketball, passed away unexpectedly.

In need of a replacement with the Marshall and SMSU basketball seasons in full swing, Rohlik’s boss Brad Strootman suggested that he join fellow broadcaster Justin Thordson for the next game’s live-call. With little experience to hang his hat on, Rohlik was admittedly hesitant.

“I mean, I’m 19 years old thinking, ‘No chance, man’,” said Rohlik. “Knowing the magnitude of what Jerry was to not only calling the games, but to the community for both Mustangs and Tigers was just something that I didn’t think I was ready for, but Thordson talked me into it and here we are still doing the same kind of thing. Hopefully I do a good enough job that people enjoy it.”

According to Rohlik, his first few times cracking the mic didn’t go as well as he would have liked as his passion sometimes hampered him. As time went on, he knew he had to reign it in.

“I think early on I was very immature. I was very passionate and probably over the top at times and that isn’t what a good play-by-play guy is,” said Rohlik. “You can be passionate, but not to the level I felt that I was at. Maybe I’m harder on myself, but I just felt listening to some of those games that I did in the early stages of getting into this, I felt personally it was brutal and I knew that I had to get better and more mature.”

‘If you script it, it’s not going to be natural’

With more and more experience accumulated over time, Rohlik developed his formula for success and used it to bring some of the area’s greatest sports moments to life.

The key for Rohlik in finding his voice was to simply keep it natural, just as famous broadcater Al Michaels alluded to in his famous quote: “I’ve always felt that I’m in a spontaneous business and if you script something, if you plan something, it will sound that way.”

The approach was exemplified during one of Rohlik’s most memorable interviews this past season with legendary Mustang basketball player Ryan Bruggeman following the team’s NSIC championship game loss to Northern State, the final game of Bruggemann’s collegiate career. Rohlik could not help but get emotional upon seeing Bruggeman get choked up after reminiscing about his time with SMSU.

“As soon as I looked over and I saw tears flowing to the ground I was done. And then you’re trying to be a professional and that was one of the hardest interviews I’ve ever done,” said Rohlik.

Being with the team on road trips and getting a first-hand glimpse into the hard work put in by the players and coaches and the bonds developed made the interview an emotional experience.

“I don’t know why it was so filled with emotion but I watched this young fella come up from being a redshirt freshman from Pelican Rapids to now being a stud,” said Rohlik. “I think since doing the Mustangs games and going on road trips, you see how tight their bond is. You know how much they want to win for each other and it’s never an individual kind of thing.”

When an individual tunes into their favorite live-game broadcast, the hours upon hours of prep-work put in to make it all come together may be lost on the casual-listener.

In fact, Rohlik says the preparation and research done beforehand makes the final step of calling the game seem like a piece of cake.

“From Monday ’til gameday I am working on game notes of different things that I’ll type out and set up a spread sheet,” said Rohlik. “The games are a piece of cake, but the actual lead up to getting the interview, setting up your pregames and things like that of making sure that you’re prepared for a broadcast is your number one thing.”

Of course, the whole process is a team effort. For gameday information pertaining to injuries and roster updates, Rohlik works hand in hand with Sports Information Directors like SMSU’s Kelly Loft, as well as fellow play-by-play announcers from opposing teams.

“There’s so many other guys that play, you have to know the roster top to bottom,” said Rohlik. “Sports Information Directors like Kelly (Loft) is for Southwest (Minnesota State) are so essential in getting you the information.”

The copious amounts of preparation undertaken by Rohlik circles back to his ultimate goal of bringing each athlete’s journey consisting of hard work and sacrifice to light as they’re laying it on the line on the court or field for a game.

“My goal is is to have people understand and or hear what they’ve gone through to get to that either great moment or so close, and just to hear their emotion rather than always seeing it,” said Rohlik.