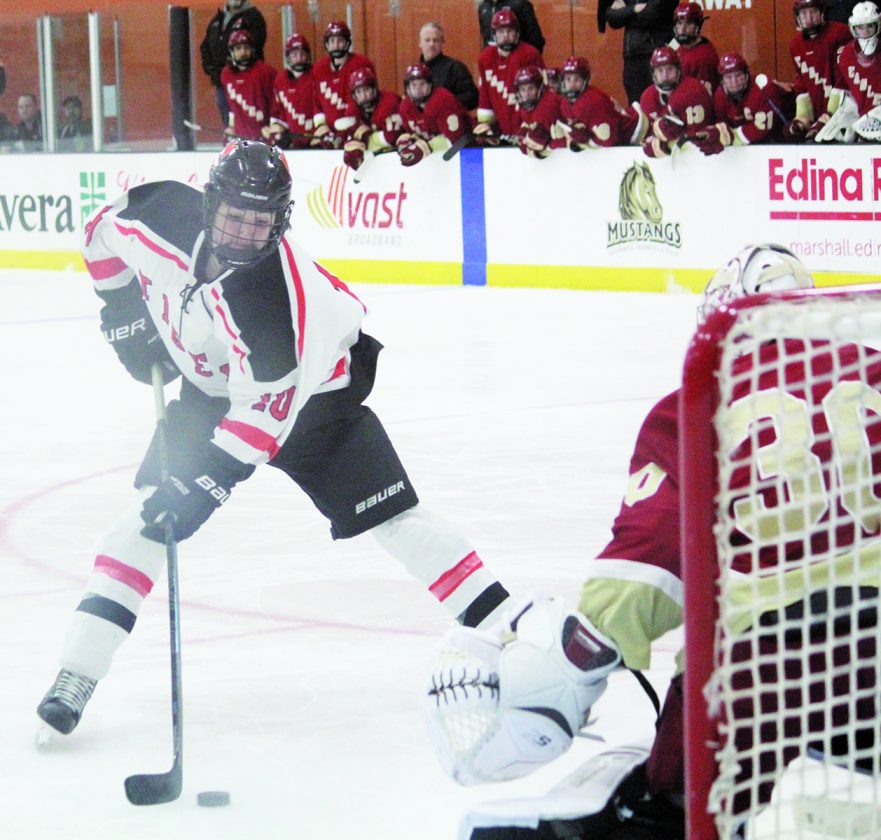 MARSHALL — The Marshall boys hockey team went toe-to-toe with one of North Dakota’s premier hockey programs in Fargo Davies (ND) on Saturday in the championship game of the annual Thanksgiving Tournament at Red Baron Arena.

The visiting Eagles managed to light the lamp in all three periods of the contest en route to handing the Tigers their very first loss of the season in a 4-1 final, and earning their third straight tournament championship with the win.

In spite of the disappointing result, Marshall coach Michael Weiss came away pleased with his team’s performance.

“I thought we gave a good effort. We knew they were going to be a really good team coming in and the team played hard,” said Weiss. “We blocked more shots and played well in our own zone and Dom made saves when he needed to so I’m happy with the effort. I mean not the result that we wanted, but we saw good things that we can use moving forward.”

In the first period of the championship matchup, the Eagles–using their collective team-speed and precise passing–maintained complete control of the puck during 5-on-5 play and peppered Marshall netminder Dominik Caspers before burying their first goal at the 3:52 mark.

Marshall’s lone even strength scoring chance of the period came on a Joe Archbold breakaway that was sticked aside and out of harm’s way. Later on in the frame, the Tigers were able put some additional pressure on Davies’ goaltender on their first power play attempt when Tristan VanDeVere nearly connected with Braxton Meyer on a backdoor pass that was redirected out of play to maintain the Eagles’ 1-0 lead into the intermission.

Feeding off the late push in period one, the Tigers began the second period with an extra jump in their step and generated more quality chances via the early power play that carried over from the previous period. When the Eagles returned to full strength, Marshall continued to establish pressure in their defensive zone highlighted by another scoring chance by VanDeVere.

Weiss attributes the second period turnaround to the Tigers playing with more confidence.

“They came out a little scared in the first and we said you can skate with these guys and there’s plays to be made. They stepped up that period and made some things happen,” said Weiss.

After a Davies goal at the midway point of the period momentarily halted the Tigers momentum, Marshall recaptured it moments later when Kaleb Welvaert sent a tape-to-tape pass to VanDeVere that led to a breakaway. VanDeVere made no mistake with the puck on his stick by netting his first goal of the season with a hard wrist shot that cut the deficit back to one goal at 2-1.

Unfortunately, the Tigers were unable to come any closer on the scoreboard as the Eagles clamped down defensively in the final period in limiting Marshall to only two shots in the final 17 minutes of play. As a result, Davies spent the duration of the period getting pucks through on Caspers before scoring back to back late goals in the span of a minute to seal a 4-1 victory.

Caspers finished the game with 40 saves on 44 shots on net and made 71 saves total in the two games after shutting out Pine City in the tournament opener.

Marshall (2-1) will be back in action on Tuesday for a 7 p.m. matchup on the road against rival Luverne. Weiss said the team will look to use some of the lessons learned during its first three games and apply them to their upcoming matchups.

“We just learned how we have to play in our own zone and just keep as many shots away from Dom as we could,” said Weiss. “(We need to) take that forward into our section and conference games coming up and just use that to improve.”