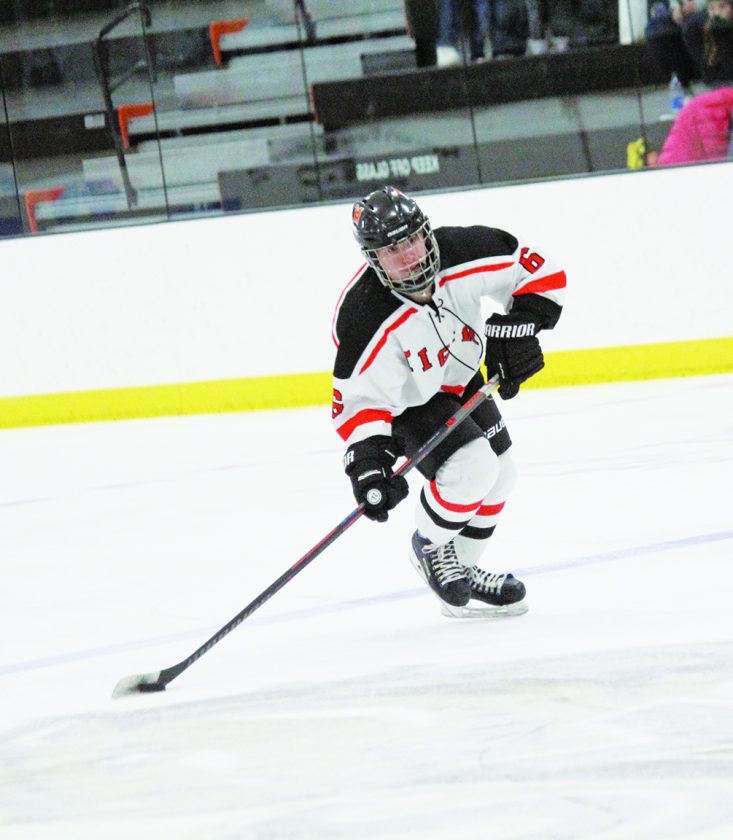 Photo by Jake Przytarski Marshall’s Cooper VanOverbeke controls the puck during their game against Redwood Valley on Thursday. The Tigers defeated the Cardinals 6-2.

MARSHALL — A four-goal flurry in the third period of Thursday’s Big South Conference clash against Redwood Valley lifted the Marshall boys hockey team to a 6-2 victory at Red Baron Arena. The win moves the Tigers to 5-3 on the season.

After getting off to a sluggish start in the contest, Marshall coach Michael Weiss was happy with how the team gradually improved as the game went on.

“We started off a little slow but it was nice to see we gradually got better and better,” said Weiss. “We were a little better in the second, and finally in the third we started putting things together and looking good out there.”

The Tigers were forced to play from behind for a majority of the first period after the Cardinals capitalized on a Marshall miscue behind the net to take a 1-0 lead 6:28 into the period. Though it wasn’t the start they were looking for, Weiss said the team remained confident in the face of the early adversity.

“I think we were still pretty confident,” said Weiss. “We still kind of sat back on our heels a little bit and just kind of let things happen and then finally in the second we had a little bit of urgency and put some goals in.”

For the remainder of the period, Marshall kept the puck deep in Redwood Valley’s zone and piled up scoring chances before breaking through with a goal in the final minute. Joe Archbold, who would finish the night with three points on a goal and two assists, scored the equalizer with a tip-in off a precision pass by Kaleb Welvaert to knot the score up at one apiece into the first intermission.

The ice remained tilted in Marshall’s favor in the second period as the Tigers went on to outshoot the Cardinals 13-4 in the frame. In spite of the decided edge in scoring opportunities, Marshall was only able to find the back of the net once with Jaden Gannott scoring an even strength goal at the 8:17 mark on assists from Bryson Whyte and Cooper VanOverbeke.

The inability to generate additional offense was a source of frustration amongst some the players as the team remained clinging to a one-goal lead heading into the third period.

“We had a few guys get frustrated, and we just told them you just have to keep going with it,” said Weiss. “Keep doing what you’re doing and eventually lanes are going to open up and when you get an opportunity you just have to bury it.”

Sure enough, the Tigers’ fortunes changed early on in the third period as a goal by Welvaert in the first three minutes of play opened the floodgates for an avalanche of scoring. Over the next three minutes, Marshall’s lead grew to 5-1 following goals by Whyte and another by Welvaert. Archbold, Tristan VanDeVere and Blake Kruse all picked up assists.

Weiss said the team was determined to get off to a fast start in the third period in order to prevent the game from remaining close down the stretch.

“I think the guys just weren’t satisfied with their effort in the first couple periods and decided to kind of salvage it and not make it a game come the last few minutes, which was good,” said Weiss.

Just past the midway point of the period, the Cardinals scored their final goal to cut the deficit back to three, but an even strength tally by Welvaert in the final 10 seconds gave him a hat trick and lifted Marshall to a 6-2 win. Goaltender Dominik Caspers finished the night with 10 saves on 12 shots.

Marshall will be on the road for its next matchup against Waseca on Saturday at 2 p.m. Weiss said the team needs to continue to focus on doing the little things right.