Lakeview use stifling defense, balanced scoring to roll past Canby 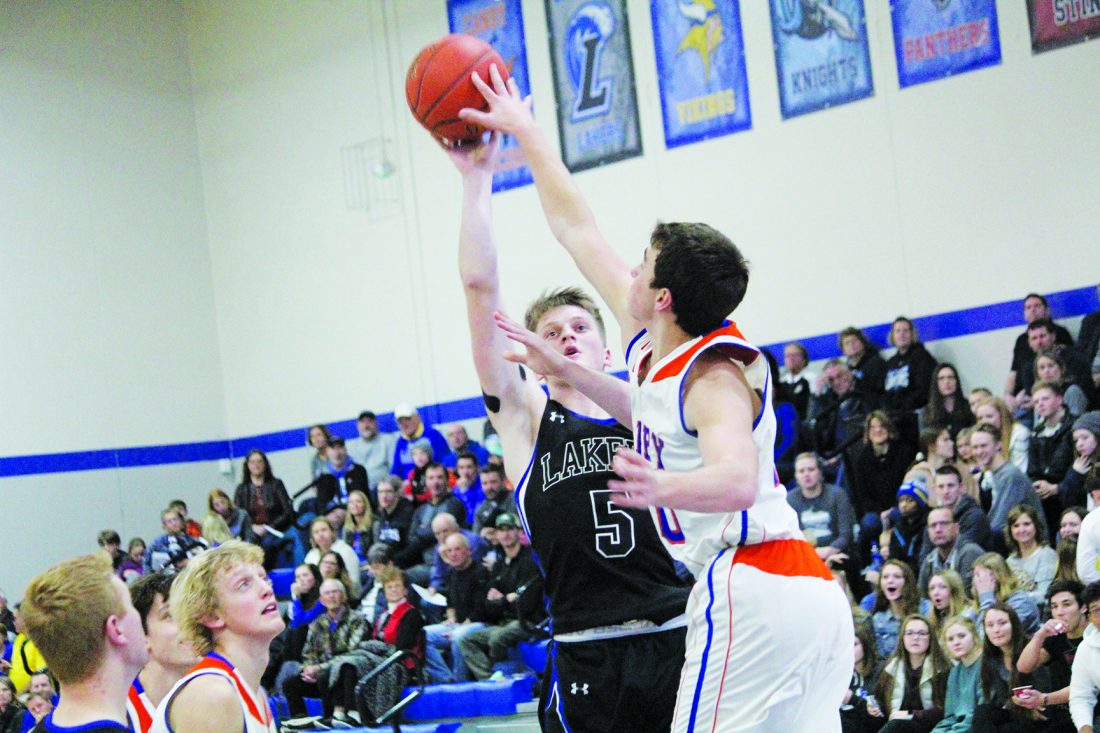 Photo by Jake Przytarski Lakeview’s Aaron Loe shoots a jumper over a Canby defender during their game on Friday. The Lakers defeated the Lancers 78-39.

COTTONWOOD — A week removed from a thrilling buzzer-beater victory over Minneota, the Lakeview boys basketball team returned to its home court on Friday where they overwhelmed Canby with swarming defense and a well-balanced offensive attack in a 78-39 rout.

The extended layoff between games did little to curb the Lakers’ intensity level as coach Jared Keaveny was very pleased with their effort throughout the game.

“I thought our effort was outstanding. We had a couple of situations where we made some mistakes but the effort was there all night,” said Keaveny. “We kept our foot on the gas pedal and kept going all night, and I’m really proud of the kids for their overall effort.”

Disappointed by the team’s performance, Canby coach Eric Hansen said their inexperience loomed large in their inability to keep up with the Lakers.

“Inexperience, lack of effort and turnovers have been a real killer for us. Defensively we’re just not there yet,” said Hansen.

Guided early on in the half by Parker Hoffman, the Lakers battled through a back and forth exchange with the Lancers in the opening minutes of play to come away with a slim 8-6 advantage. Showing their depth with offensive contributions from Aaron Loe, Billy Errington and Connor Larsen, the Lakers saw their lead grow to double digits minutes later at 22-10.

In need of an offensive spark, the Lancers found it from center Nathan Prokop down the stretch. The Canby sophomore paced the team with 10 points in the half and was a catalyst for their late run that brought the team back to within seven points at 32-25 near halftime. The seven-point deficit would be the closest they would come to catching Lakeview, however, as a 6-0 run to close the half gave the Lakers a 38-25 lead at the buzzer.

When play resumed for the second half, Lakeview created additional separation on the scoreboard with its best stretch of the game that culminated in a 14-0 run and a 52-25 lead. The driving force behind the early second half surge was Loe, who quickly got into a rhythm after being forced to sit for a majority of the first half due to foul trouble.

Keaveny said Loe’s contributions offensively, along with the team’s relentless pressure were the key’s to their second half success.

The dominant scoring run set the tone for the remainder of the second half as the Lakers remained in control down the stretch to win 78-39.

Lakeview (3-1) will be back in action on Tuesday when the team hosts Yellow Medicine East at 7:15. The Lancers (0-3) will be back on the road for their next game on Tuesday against Minneota at 7:15 p.m.